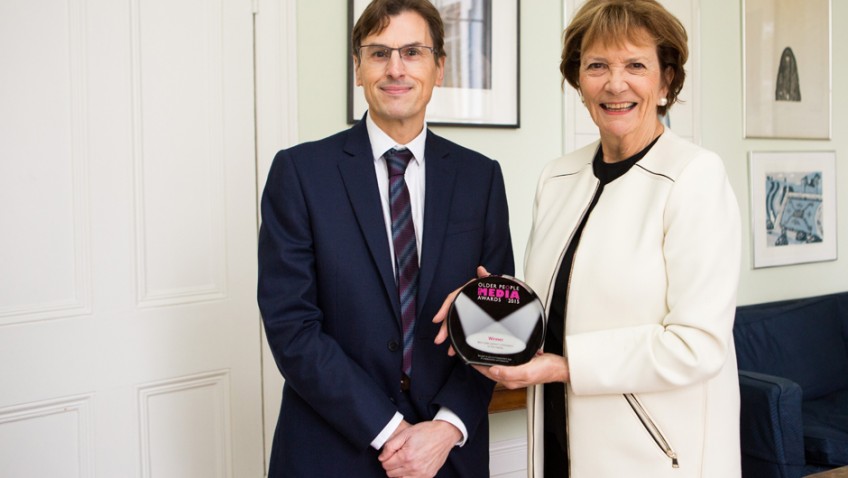 The awards are a celebration of the best representations of older people’s issues in the media. They are run by older people’s charity, Independent Age, in collaboration with Gransnet, the social network for the UK’s 14 million grandparents.

J.B. Morrison a.k.a. James “Jim Bob” Morrison, who was the lead singer in Carter The Unstoppable Sex Machine, has won in the “Best older person’s character in a book, film, TV or radio drama” category for his character, Frank Derrick, in his book “Frank Derrick’s Holiday of a Lifetime”. Sir Ian McKellen was nominated for two different characters in this category – Freddie Thornhill in ITV’s Vicious and Sherlock Holmes in the film Mr Holmes – and other nominees in the category included Sir Derek Jacobi, Frances de la Tour and Gemma Jones.

Commenting on his win, J.B.Morrison said, “Winning is unbelievably flattering and I’d say it’s even better than winning the Booker Prize. It’s good for Frank too as now he has something of value to put on his mantelpiece next to all the charity shop giraffes.”

Baroness Joan Bakewell has won the “Best older person’s champion in the media” award, in the face of stiff competition from Baroness Ros Altmann, Angela Rippon and Dame Esther Rantzen. Baroness Bakewell has commented extensively in the media about older people’s rights in the modern world, often using her own experiences as examples. She formerly held a government-appointed role as the Voice of Older People from 2008 to 2010.

Speaking about her win, she commented, “I’m really thrilled to win this award as it acknowledges the little efforts I have been making here and there to really champion the case of old people. It all began when I was appointed by the government as the Voice of Older People, which was a request they put to me to speak up for the old wherever I could. They wanted someone to bring the problems of the old to the attention of the public at large.  And so that is what I did, I spoke about them everywhere I could go and it’s nice to have that acknowledged.”

With a public vote held exclusively online for the first time in 2015, the Older People in the Media Awards hope to shine a light on the characters, marketing campaigns and individuals that have either positively portrayed older people, or sensitively highlighted the issues they face. Winners from previous years have included, among others, Dame Judi Dench for her role in the film Philomena and Anne Reid for her portrayal of the character Celia in Last Tango in Halifax.

This winner of the “Everyday Ageism Hero” category, which awards the best marketing campaign or initiative to promote ageing in a positive light, was L’Oréal for its Age Perfect campaign with Dame Helen Mirren. The campaign was voted the best by members of the public via Gransnet, defeating the & Other Stories and Vans collaboration for their SS2015 campaign with Daphne Selfe and the Yves Saint Laurent for SS2015 campaign with Joni Mitchell.

Janet Morrison, Chief Executive of Independent Age, said, “All the winners of the Older People in the Media Awards have made an outstanding contribution to representing older people’s issues in the media. Thank you to everyone who voted and also to all the nominees, who are working hard to help highlight some of the issues older people face. We hope that they continue to do so and perhaps they’ll even be nominated again next year!”

Lara Crisp, Editor of Gransnet, said, “As Generation X moves steadily towards ‘older person’ status, these awards showcase the diversity, talent and charisma of the over-50s. Visibility is a hugely significant issue for older people, and Gransnet users are delighted to see themselves represented by people with such verve and wisdom.”

The finalists in each category were: