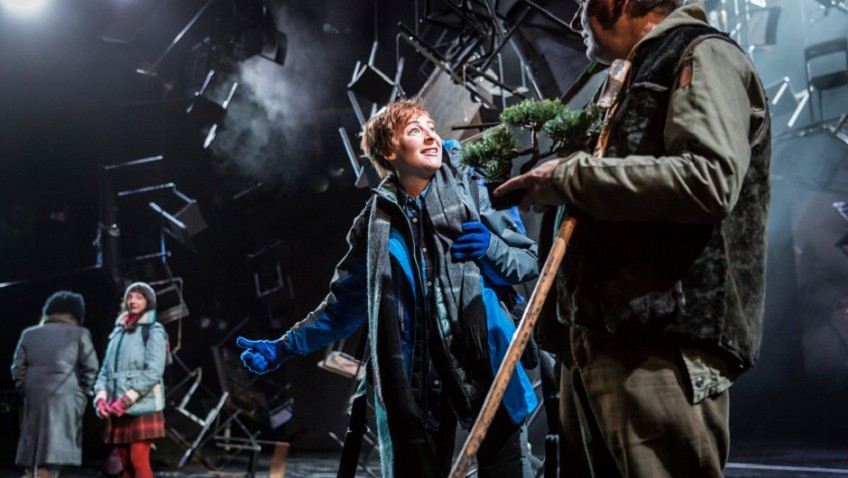 Robert Tanitch reviews As You Like It at National Theatre/Olivier

The opening scene is set in an office (Square Mile? Wall Street?) The setting doesn’t have any relation to what the actors are saying on stage and becomes very distracting.

The most arresting image is when the office furniture flies up and we are offered not a Forest of Arden but a surreal forest of hanging tables, desks, chairs, lights. It’s a great setting.

The designer is Lizzie Clachan. But it’s so weird that you cannot take Celia seriously when she says she likes Arden so much she would willingly stay there forever.

The next striking image comes when practically the whole cast gets down on all fours and pretends to be sheep. They are all wearing woolly jumpers. It’s hilarious.  A ram eats one of Orlando’s love letters.

The lovers run into strange capers but Rosalie Craig and Joe Bannister are never as lovable and amusing as Rosalind and Orlando can be.

As You Like It is not easy to get right. The truth is very few productions do get it right. The yardstick is Vanessa Redgrave’s adorable Rosalind. Still the best Rosalind in living memory, she turned the whole audience into one Orlando.

There’s a picture of Ken Dodd in the programme, which makes you wonder why the National and the RSC have never cast him as Touchstone or as any of Shakespeare’s clowns for that matter.

The final jolly song and dance number will only satisfy those theatregoers who have never seen a finale at Shakespeare’s Globe.