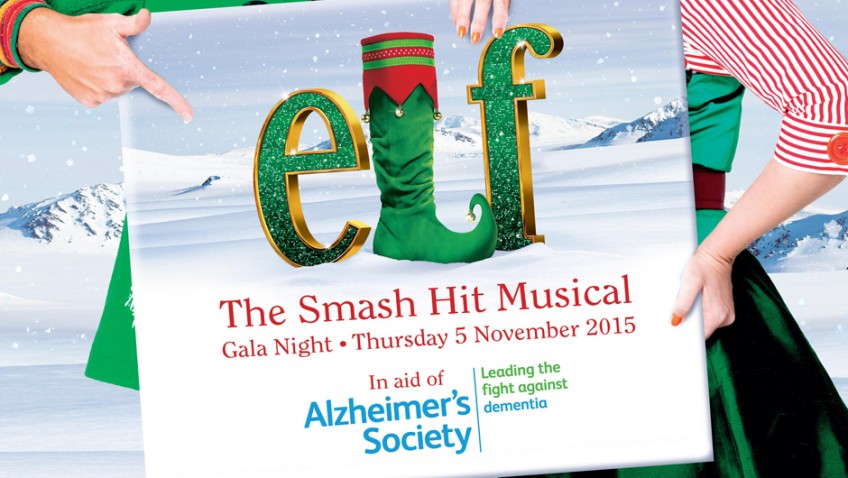 You are invited to join a string of stars at a special fundraising gala hosted by Elf the Musical as the hit show comes to the London’s West End for the very first time this Christmas.

Starring Girls Aloud’s Kimberley Walsh and winner of the ITV 1 show ‘Superstar,’ Ben Forster, Elf the Musical is based on the much loved 2003 New Line Cinema hit film, ELF, which tells the hilarious tale of Buddy, a young orphan child who mistakenly crawls into Santa’s bag of gifts and is transported back to the North Pole.

All money spent on tickets will be donated to Alzheimer’s Society, the national charity that supports the 850,000 people living with dementia and funds vital research into the condition. ‘We are delighted that ELF the musical has chosen to partner with Alzheimer’s Society for a special fundraising evening.  We hope that those who attend enjoy a wonderful evening of entertainment, whilst in the knowledge that the money they have spent on tickets will be used to help support the 850,000 people living with dementia and continue vital research.

“For people living with dementia, singing is a very powerful tool. When memories are hard to retrieve, music is especially easy to recall.  Alzheimer’s Society Singing for the Brain service, which is delivered nationwide, helps to boost confidence, self-esteem and quality of life by involving people with dementia and their carers.’

‘We are all so proud and delighted to be able to support such a worthy organisation, whose work is paramount to those affected by this devastating condition, and myself, our co-producers at U-Live and the entire ELF company hope the gala opening on November 5th at London’s Dominion Theatre will be an even more memorable and special event because of the money and awareness raised.’

Based on the beloved 2003 New Line Cinema hit starring Will Ferrell, ELF is the hilarious tale of Buddy, a young orphan child who mistakenly crawls into Santa’s bag of gifts and is transported back to the North Pole. Unaware that he is actually human, Buddy’s enormous size and poor toy-making abilities cause him to face the truth. With Santa’s permission, Buddy embarks on a journey to New York City to find his birth father, discover his true identity, and help New York remember the true meaning of Christmas.