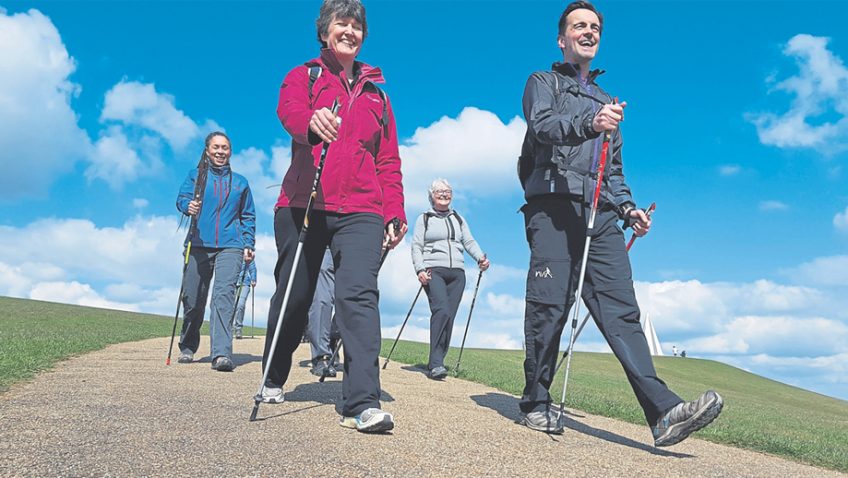 You can forget about Nordic Noir and Scandi-style interiors. These days it’s all about exercise. Nordic Walking has become one of the UK’s fastest growing sporting activities with converts springing up in local parks up and down the country.

Invented in the 1930s, Nordic Walking started in Finland after super-fit cross-country skiers began using poles in their off-season training when there was no snow on the ground. They soon found that this was giving them a competitive edge. It wasn’t until the 1980s however that Nordic Walking began to catch on as a general recreational activity and not until 2001 that the first official class took place in the UK.

But what’s so special about Nordic Walking? Why not just – well, go for a walk instead? Advocates of the technique point to evidence which suggests that it burns up to 46% more calories than ordinary walking and that the poles enable people to work the upper body at the same time as the legs. The poles also act as a support, reducing the pressure on the knees and the joints and aiding balance and co-ordination – all increasingly important elements of physical well-being as we age.

As well as the physical benefits of Nordic Walking, there’s another side to the sport which Laura Kinnunen, a Nordic Walking instructor, believes is equally important, and that’s the opportunity of meeting other people. Earlier this year Age UK published new research which found that nearly half a million people over the age of 60 usually spend every day alone and a further half a million go at least five or six days without speaking to anyone at all.

“A lot of people in London feel lonely and for many of my walkers, the regular sessions are the perfect opportunity to share and discuss anything and everything – almost like walking therapy. Nordic Walking is such a sociable activity. Of course people do it on their own too, but the benefits of spending time with others exercising outdoors are huge.”

Clare Cowen who’s 72 trained in the Nordic Walking technique with Laura seven years ago. She spent her life sitting behind a computer as a communications officer and says that these ingrained bad habits coupled with osteoporosis have led to health issues which she believes Nordic Walking has helped ease.

“My Pilates tutor suggested Nordic Walking might be a good thing for me to do and I now try and do it once a week. I’m no expert but I think that along with the Pilates, it’s definitely helped with my aches and pains, and it exercises muscles and joints you wouldn’t normally use. I really recognise the benefits of keeping active as I get older. The great thing about Nordic Walking is you can do it anywhere and don’t need any specialist gear apart from a pair of poles.”

Gill Stewart is Director of Nordic Walking UK and the author of The Complete Guide to Nordic Walking. She says it’s important to learn the technique properly, and as with any form of exercise to have a medical health check before you start.

“It’s not simply walking with poles. If you don’t get the technique right you won’t engage the correct muscles which leads to burning fewer calories and poorer results. Once you’ve been taught by a qualified instructor you’ll be issued with a FREEDOM pass which means you can confidently walk alone or join groups across the UK.”