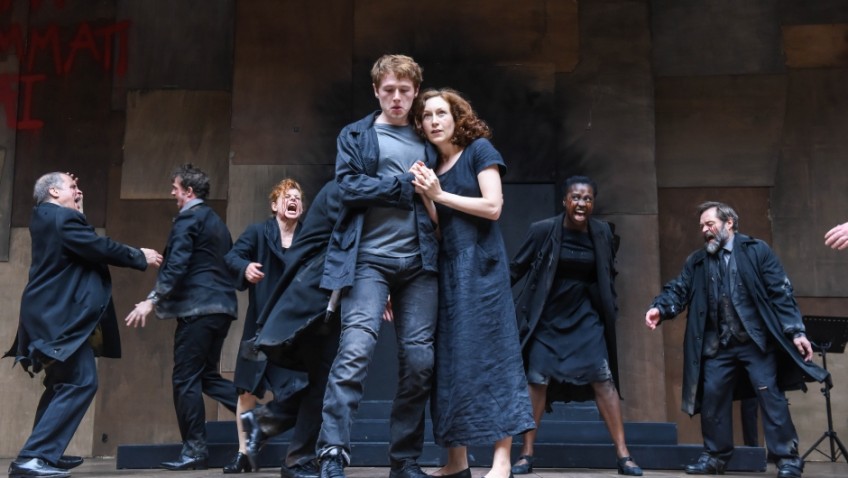 THE ORESTEIA, which premiered in Athens in 458BC, when it won first prize, is a trilogy of murder and revenge, acted over two-and-half hours with two intervals.

In the first play Clytemnestra kills her husband, Agamemnon, because he killed their daughter.  In the second play Orestes, their son, kills her for killing his dad. In the third play he takes his murder trial to the highest court, presided over by Athena, arguing that his murder was just. There are now two radical versions of Aeschylus’s trilogy running in London at the same time, and both quite different.

Rory Mullarkey’s adaptation at the Globe follows hard on the heels of Robert Icke’s adaptation which has just transferred to the Trafalgar Studios from the Almeida.

Mullarky’s script is notable for its irony and there is an amusing commentary on the 21st century’s non-churchgoing habits which might end up in poetry anthologies.

Adele Thomas’s sophisticated production will rank among the Shakespeare’s Globe’s best productions and if I have to make a choice between the two productions, Thomas’s is the one I prefer. Katy Stephens’s Clytemnestra is splendid and especially when she is expressing her contempt for Agamemnon, when he returns from  the Trojan War after a 10-year absence.

You will remember he had sacrificed their daughter, Iphegnia, for a favourable wind to take his war ships to Troy. She never forgave him and took a lover, Aegisthus, here played by Trevor Fox as an alcoholic. Clytemnestra rashly presumes that she has only to remind Orestes (Joel MacCormack) that she is his mother and bare the breast that gave him milk and that he will desist from murder. Little does she know her son.

The third play is the weakest. The Furies, who pursue Orestes after the murder of his mum, tend to overdo it and Athena really does need to improve her diction.

In the jolly curtain call an enormous phallus is brought on and paraded by the cast with pride, much to the amusement of the audience.

In 1968 in Peter Brook’s production of Seneca’s Oedipus at the Old Vic a giant phallus was also brought on. Actress Coral Browne’s audible comment from the stalls  – “Nobody we know, dear” – has passed into theatrical legend.