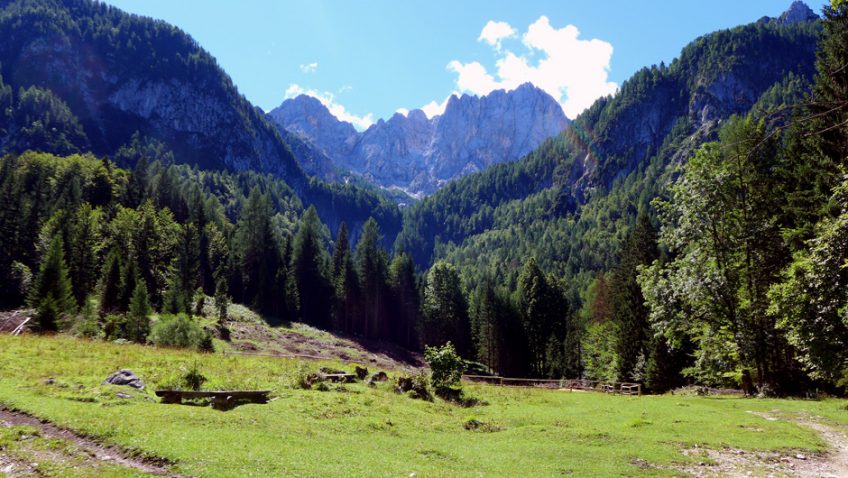 It was time for the briefing held in a comfortable family run hotel in the medieval town of Radovljica, Slovenia.

There were fifteen of us, all strangers, who had flown in from the UK, the USA, Hong Kong, Australia and New Zealand but all united by our love of walking and exploring new places.

The briefing by experienced local guides Ales Govekar and Miha Loboda marked the start of our Exodus holiday, five glorious days of trekking in a lush region of mountains, forests and lakes.

After days of sunshine, thunderstorms were on the way so they decided we’d set out on one of the higher walks early the following morning.

That evening my wife Jenny and I dined on a terrace beneath chestnut trees with views across to the jagged Julian Alps and started getting to know our fellow travellers.

The conversations continued as we began slowly ascending the forested and then open slopes of the Karanka mountain range to be rewarded by a magnificent view north into Austria as we topped the ridge at 1835 metres.

Descending from the border ridge with Austria

Lunch was taken at an alpine hut where we sampled bean soup with cabbage and cheese dumplings and then began our descent by another route, soon to come across Slovenian and American flags on a small rise.

This commemorative crash site, a poignant reminder of WW2 prompted me to ask how Slovenia fared after the death of Tito, the wartime resistance leader who went on to found and rule the former more liberalised communist Yugoslavia for 35 years.

The country was, it seemed, the first to declare independence in 1991, some ten years after Tito’s death, but because it was small and bordered by Austria, Italy, Hungary and Croatia, it escaped the troubles that later swept the region.

Thunder rolled around the mountains overnight but by 11 am the rain had stopped and we were walking around sparkling Lake Bled with its fairytale island castle and small shoals of hire boats. Marshall Tito again came to mind as we strolled past his former summer residence, now a smart hotel with its elevated ballroom where he entertained many famous people.

The following day we hiked into to the Martuljek Gorge with its dramatic falls and climbed beside cascading waters to reach a grassy alpine meadow with mountain hut and a backdrop of stunning mountains.

What a lovely spot to rest we thought, as our companions headed off to climb to a second waterfall accompanied by a third guide, the hut owner’s border collie, Amon!

That evening whilst writing up my notes on our veranda overlooking the garden and the wooded valley, hotel owner Maja Buden came by picking roses for the tables.

The Pension Kunstelj had been acquired by her great grandmother and Tito had been a guest for lunch on several occasions, she told me.

Wednesday was our free day so seven of us hired a minibus and driver and visited two famous Slovenian attractions and when we arrived at the theme park like entrance to the Postojna Caves I began wishing we’d just chilled out around our picturesque town.

But 90 minutes later emerging into bright sunshine after travelling, first on a train and then on foot through 5 kilometers of tunnels, galleries and vast halls with their giant majestic stalagmites and stalactites, we were glad we had not missed the experience.

After lunch we visited the spectacular 16th Century Predjama Castle built above a precipice and in the entrance of a giant cave. A most memorable day finished with a short walk around the historic centre of the capital Ljubliana and a tasting of local wines with tapas in a tavern just around the corner from our hotel.

A surprise was in store the following day after we’d trekked past more waterfalls in the densely wooded Triglav National Park to come to the head of a small valley surrounded by high hills and it looked as if a stiff climb of several hours lay ahead.

But no, we trended around to the right through more woodland to emerge at the top of a wide grassy slope at the head of another small valley which had been completely hidden from view and there was another alpine hut and lunch.

Here we dined on delicious wild mushroom and vegetable soup with chunks of bread before strolling back down the valley to spend a chill out hour beside tranquil Lake Bohinjsko, another shimmering pearl surrounded by mountains.

That evening, a further treat was in store with a Flamenco show in the small medieval square close to our hotel whose owner Maja cooked sausages in pastry as part of the street fare, while her father Tony was the official photographer.

My highlight of the holiday was our drive the following morning up through the wooded foothills of the Julian Alps to climb the last 700 metres to the top of the 2009 metre high Brda Peak where we were rewarded with a breathtaking 360 degree view of mountains.

On the way down, we came across one of Tito’s hunting lodges, now just a ruined pile of timbers, so yet another reminder of the man who cast his own large footprint on the history of the 20th Century.

That evening after our farewell dinner, Jenny and I strolled out into the lamp lit square where just a few locals lingered outside a bar, their voices carrying on the warm evening air.

Then a bearded figure appeared and sitting beside the fountain, took out a violin and began playing some of the most haunting classical pieces I had ever heard.

The fountain where the violinist played

His music echoed around the square and people emerged pied piper like from the shadows, as if entranced by the haunting notes, and quietly stood around or stooped towards his open black case to express their appreciation.

It was the perfect finale to a truly memorable holiday.

The trip included five walks with two knowledgeable guides who could not have done more to insure that everyone got the most from the experience.

Accommodation was at the comfortable 1873 built Pension Kunstelj in Radovljica.