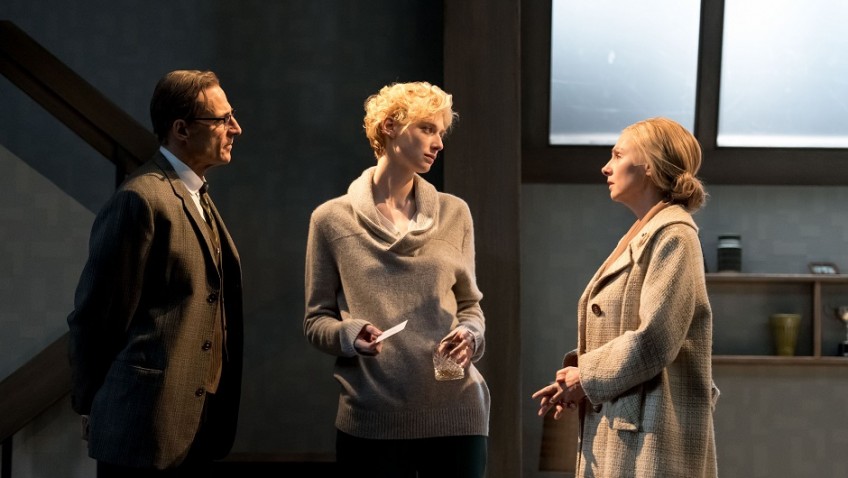 Perhaps the first thing to say is The Red Barn has nothing to with the sensational murder in the old red barn in Suffolk in 1827 which caught the imagination of the public to such a degree that there were plays on the stage even before the murder trial was over.

The Red Barn at the National Theatre is definitely not a Victorian melodrama but a 20th century psychological thriller, La Main, a study of sexual obsession, jealousy and violent impulse, written by Georges Simenon and now adapted by David Hare.

Robert Icke’s production, which is both theatrical and cinematic, is cleverly and stylishly designed by Bunnie Christie with sliding panels.

The story is set in America and the leading character is a lawyer. He is one of four people caught in a blizzard during which his best friend dies.  The lawyer fancies the dead man’s wife and is encouraged to have an affair by his wife. The lawyer is a dull man who has led a dull life. The two women compliment him on his dullness.

How did his best friend die? Was it an accident? Was it murder? Was it suicide?

Mark Strong is the lawyer jealous of his best friend’s sexual success. Icke encourages the audience to think that the lawyer, even if he hasn’t already murdered someone, will be murdering somebody soon.

Hope David is his pragmatic wife. Elizabeth Debicki, whom you may have seen in TV’s The Night Manager, is the tall, elegant and beautiful woman he really fancies. The acting’s very good.

I came out of the theatre, however, feeling something was missing and was not sure what.

Simenon was much admired by Gide, Cocteau, Colette, TS Eliot, Thornton Wilder and Henry Miller. He was a prolific writer, the author of 400 books, including 75 Maigret novels.

David Hare in a programme essay recommends three books by Simenon in particular: Sunday, The Widow and Dirty Snow.

The National Theatre might consider having some melodramatic hiss and boo fun one Christmas with a revival of Maria Martin or The Murder in the Old Red Barn.