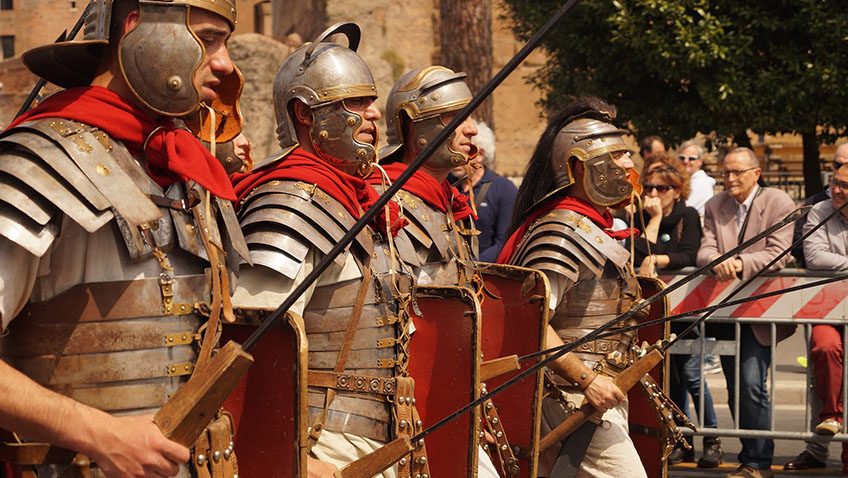 Wales was the furthest outpost of the Roman Empire and in AD 75, the fortress of Isca Augusta was built at Caerleon. This was one of only three permanent fortresses in Roman Britain and the remains on view give a vivid picture of life in second-century Roman Britain. The National Roman Legion Museum in Caerleon is situated on part of the site of the former fortress and houses a superb display of artefacts, demonstration rooms and a reconstruction of the legionaries’ quarters.

Just a few minutes walk from the museum’s galleries takes you to the most complete Roman Amphitheatre in Britain. The building started in AD 90 and it lies outside the fortress walls. It’s still an impressive sight today, so just imagine how imposing it would have been with its original timber grandstand, built to house approximately 6,000 spectators. There are also the beautifully presented Fortress Baths and the only remains of a Roman Legionary Barracks on view anywhere in Europe, to be explored.

The museum’s fabulous range of artefacts give an insight into how the Romans lived, worked, fought, worshipped and died. The oldest recorded piece of writing in Wales is on display, along with one of the largest gemstone collections anywhere in the Roman Empire, the bones of a Roman man buried in a Bathstone coffin (always popular with the children!) and a large display of authentic, everyday Roman articles, including pottery and cooking utensils.

The Romans brought their garden designs with them in 43 AD, introducing ornamental gardens to Britain. The Romans used gardens as places for leisure and pleasure as well as horticulture, and were one of the first civilisations to use gardens as an extension of the house, just like many of us do today. Plants figured in a range of Roman activities, such as cooking, making honey, decorating their villas, medicines and religious ceremonies and so it’s not too surprising to find that that they bought a number of plants with them when they occupied Britain. Things we think of as native British plants like foxgloves and roses were actually Roman imports, as were onions, plums, walnuts, sweet apples and rosemary.

Some of the gardening and horticultural techniques the Romans introduced are still used today, from turning soil in the autumn to hoeing beds and sowing seeds in spring. The museum has created a Roman garden to show how a typical garden may have looked, complete with box hedges, an open-air dining area, patios, garden furniture and gazebos.

The Roman Baths Museum is very close to the National Roman Legion Museum. Here the remains of the military bathhouse, which originally housed a frigidarium, tepidarium and caldarium and an open-air swimming pool, can be explored. Modern technology provides a vivid image of the baths in all their former glory. The Roman Baths Museum is free to visit and is run by CADW. Opening times are not exactly the same as the National Roman Legionary Museum and so it would be best to check with CADW before visiting. Check their website for details: http://cadw.gov.wales or call them on: 0300 025 6000.

Like other National Museums and Galleries of Wales, entry to the National Roman Legion Museum is free. The museum organises an excellent variety of events right through the year (there is a small charge for some of these) and has award winning educational facilities and family fun area. For more information and opening times, please visit: https://museum.wales/roman/ or telephone: 0300 111 2 333.

The museums and local area are packed with interesting things to do and see for all the family and Caerleon has a selection of tearooms, coffee shops, pubs and cafes to cater for your refreshment requirements. This would make an ideal destination for anyone who loves history, the Romans or just a good day out.