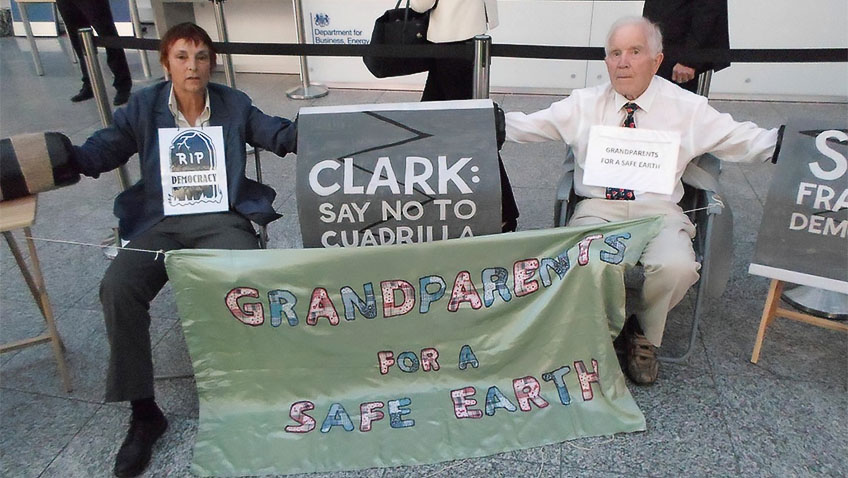 Who says that protests are the preserve of the young? Students may have spearheaded the Paris riots of 1968, but fifty years on it’s some very concerned grandparents and elders who are sticking their heads above the parapet and standing up for what they believe in.

Phil Kingston may be a slightly built white haired gentleman of 82, but he is a man on a mission. Phil and his friend Kate Cannell, a spritely 71 year old, were becoming increasingly concerned about the effects climate change was having on our world.

Thinking about what they could do to try and safeguard our world for their grandchildren and future generations, they started the non-party political and secular group Grandparents for a Safe Earth (GFASE).

Holding to the principle articulated by the English social scientist and anthropologist Gregory Bateson (1904 – 1980) ‘the organism which destroys its environment destroys itself’, GFASE want the Earth’s eco-systems to be kept as intact as possible, giving security to future generations, and to leave behind social structures and cultures which acknowledge humanity’s primary dependence upon our planet.

Engaging with those who make the commercial and political decisions on issues that impact on the environment has been a key objective of the group, trying to influence decisions being made that impact on our planet.

As writing letters and submitting petitions didn’t seem to be working, the group took the decision that they would be prepared to take direct action in a spirit of non-violence and respect.

Since then they have engaged in non-violent, peaceful demonstrations at locations including the Department of Energy and Climate Change and the Department of Business, Energy and Industrial Strategy, the results of which have caused disruption and brought their concerns to a wider audience.

If you’d like to know more about Grandparents for a Safe Earth (GFASE) please visit their website at: www.network23.org/gfase or telephone Alison on 0117 2396458.