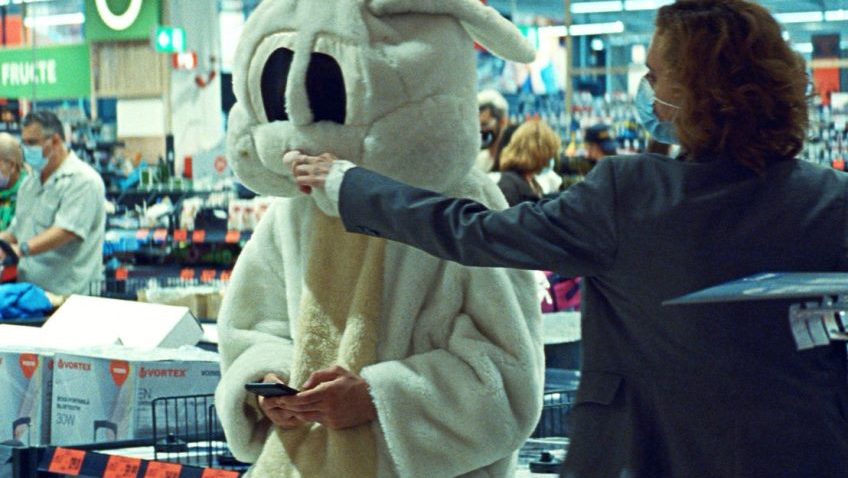 Like nothing you’ve seen before: Radu Jude’s provocative, challenging but rewarding Romanian satire

If Bad Luck Banging or Loony Porn is an unlikely title for the winner of the Golden Bear (Best Film) at this year’s Berlin International Film Festival, it does what a title should do: it encapsulates the nature of the film to follow. Romanian writer-director Radu Jude’s film is the only one in competition to have been shot during the pandemic by actors and extras wearing (and being reminded to wear) masks. It is also the only one to begin with an extended explicit, hardcore sex scene in a scathingly satirical film that continually provokes, challenges and immerses the audience in a living drama for our times.

What does this pornographic scene have to do with conservatively dressed, well-respected history teacher Emi Cilibiu (Katia Pascariu) whom we follow, for the rest of Part One, through the streets of Bucharest, with the roving camera taking in the people, the architecture, the advertisements, the commerce and the selfish drivers parked on the pavements? Everything.

The sex tape, made for fun during lockdown by Emi and her husband is accidently downloaded and goes viral, reaching bemused colleagues and incensed parents at Emi’s secondary school.

The plot, and Emi’s dilemma, emerge gradually during her walk through the city as she answers her phone and makes calls. From the snippets of the conversation, we can tell she is concerned and upset. The unfeeling camera darts all over the place, fixating on the carvings of a once ornate building, on a retail shop front, and on advertising posters making Emi and her predicament part of the landscape.

Part Two, A short dictionary of anecdotes, signs and wonders is just that: a subjective montage, including the Catholic Church’s collusion with the odious Ceausescu in the 1989 Revolution; the speedy murder of 3,000 Jews and Roma so the troops could rush home for the holy holiday of Christmas; the fact that 5% of respondents say rape is justified in certain circumstances and that “a good building always makes a beautiful ruin” along with the definition of a free country. A free country “is a country where I can beat people as I wish.”

These “anecdotes” or “definitions” are interspersed with depictions of sexual parts and acts as though forming a hierarchy of values and forcing us to confront the juxtaposition of the slaughter of innocents, and the hypocrisy of Christians celebrating Christmas with the shot of a woman’s private parts, and contemplating why of the three, pornography is the most offensive. These anecdotes and definitions are a montage of “isms”, including consumerism, sexism and intolerant nationalism as well as signs of a failed government, illustrated, perhaps, by a long coronavirus queue at a funeral parlour.

Both sections One and Two feed into Section Three, in which Eli is tried, outside her school due to covid, by a kangaroo court of her peers and school parents. She defends herself brilliantly revealing an intelligent, calm, reasonable, eloquent and devoted teacher.

At first the debate is nuanced, and we see that the men tend to be more forgiving than the woman, while the principal (Olimpia Mălai), who clearly values Emi as a teacher, attempts to moderate and retain her neutrality. The debate about whether Emi is responsible for children seeing something they were never intended to see and should not be seeing is an interesting one, and not limited to this storyline.

As the debate becomes heated, the importance of the potted portrait of the nation in the previous sections become apparent, particularly in the outpouring of institutionalised anti-Semitism. The truth about these parents comes out as though Radu Jude is holding up a mirror to his country. No wonder, as the director told the audience at the London Film Festival, with a smile, opinion was divided in Romania with more people disliking it than liking it. You do not have to be Romanian to have strong reactions to this demanding, challenging and rewarding film. You just have to be human