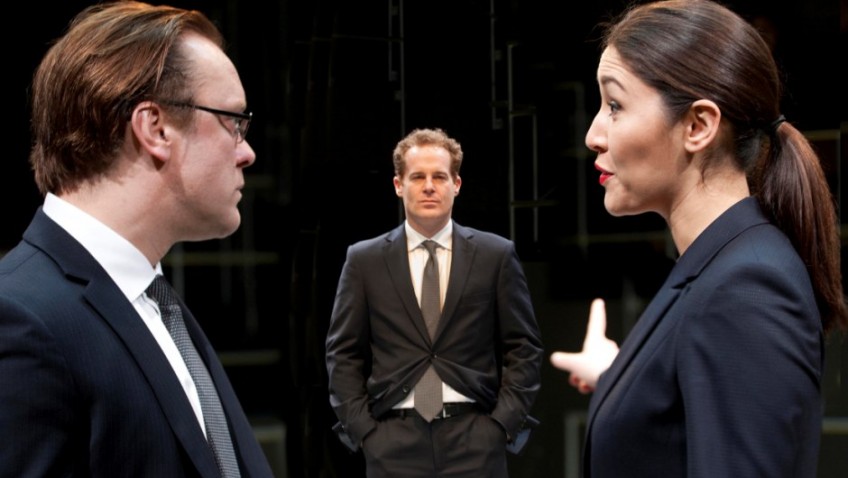 Bull, his earlier one-act play, lasting 55-minutes, first performed in Sheffield in 2013 and staged in New York, is only now getting its London debut.

Life is tough. There is bullying and redundancy in the market place. People are fighting for their jobs and only the fittest survive.

The action takes place in a corporate office. There are three candidates for two jobs. Tony and Isobel gang up on Thomas to make certain he is the one who is going to be made redundant.

Tony (Adam James), all smiles, is smart, cool, arrogant, privileged and extremely confident. Isobel (Eleanor Matsuura), in high heels, sleek, bitchy and sexy, has poise in spades and is, possibly, even more intimidating.

Thomas (Sam Troughton), weak, flabby, unattractive, is a born loser, insecure and on the defensive. Thomas is the bull. Tony and Isobel are the matadors. They humiliate and torment him until they break him and bring him down.

I felt I was watching a play by Neil LaBute. The acting is exemplary. I haven’t seen anything quite as nasty since LaBute’s In the Company of Men.

Claire Lizzimore, the director, stages the play inside a boxing ring with the audience on all four sides, sitting and standing, which increases the nastiness. The devastating watery climax is an absolute knock-out.

It might be a good moment to revive another of Bartlett’s one-act plays. Cock and Bull together could make a formidable and commercial double-bill.