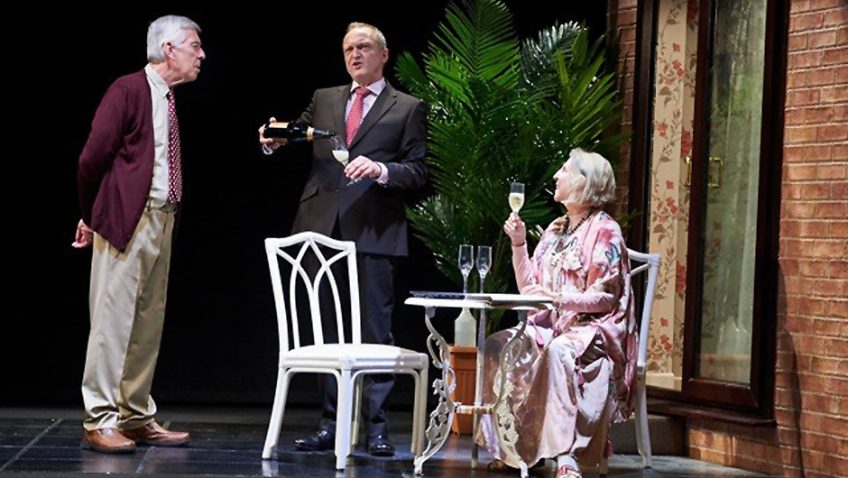 Not just Waiting for God

Many of us will remember the hit TV comedy Waiting for God that graced our screens in the 1990s. Set in the Bayview Retirement home, who can forget the acerbic tongue of Diana Trent and Tom Ballard her rather other worldly side-kick. Fans will be delighted to hear that the series creator and writer Michael Aitkens has adapted his award winning series for the stage.

Michael’s new play finds all our favorite characters from the original series facing the challenges that come with growing old disgracefully in the era of the silver surfer. At Bayview Retirement Home, Diana Trent conspires with Tom Ballard to give the conniving manager his comeuppance with unexpectedly heart-warming results. This funny and witty production stars Olivier-Award winner Nichola McAuliffe as Diana Trent and Jeffrey Holland* as Tom Ballard. The Mature Times caught up with Michael as his stage adaptation prepared for its UK run. 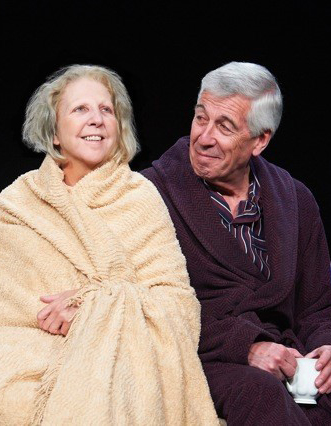 A native of Jersey, Michael spent a number of years in Australia during the 1970s and 1980s, giving him the chance to develop his acting skills and ‘basically got paid for having fun’. Despite having fun in the Aussie sunshine, he also spent a few years in Los Angeles during which time he graduated from the American Film Institute. However, Michael’s first love was always writing. ‘I always wanted to be a writer’ he tells me and went on to say how his first pitch was to a producer who happened to be in the back of the minicab Michael was driving; ‘he gave me £30 probably to get rid on me!’

Clearly someone spotted Michael’s talent and he has gone on to pen a string of successful scripts for television, film and the stage. We chatted about the differences in how one approaches a television or film company in the USA compared to in the UK. Michael explained that writer have to be more self-promoting to American producers. Although everything will have been submitted in writing beforehand, a verbal pitch is still required and it’s expected that the actors will have been engaged before making the pitch. On top of that, there’s a whole new vocabulary to learn! A tough call for us self-deprecating Brits.

Although it is probably true to say that Michael is best known for writing Waiting for God he has had a varied career and includes acting as well as writing for film and television on his rather impressive C.V. A favourite piece of Michael’s television work is ‘A Class Act’ starring Joanna Lumley as the aristocratic Kate whose wide-boy husband vanishes with her ill-gotten cash. It is witty and very funny, a joy to watch. It had impressive viewing figures when it was shown in the mid 1990’s and is definitely one worth repeating. Michael admitted that this series had been ‘huge fun’ to make.

Most recently Michael has been a core scriptwriter on Midsomer Murders, which he thoroughly enjoyed: ‘ You can write such quirky characters when you have such talented actors involved’ he said. I asked Michael what it felt like when you see a character that you’ve created bought to life on screen? ‘Sometime they’re what you had imagined in your head and sometimes they’re not. As soon as the actor opens their mouths, the character becomes theirs’ although Michael did confess to being a little possessive of his characters, especially when an actor refers to them as ‘mine’ during rehearsals!

Having given up his 5 acres of garden in Kent, Michael is now back living on Jersey and enjoying having the beach as his garden. He plays tennis three times a week but this hasn’t stopped him working on a couple of projects that are in the pipeline. Michael is a charming gentleman and very engaging. I for one am looking forward to the new stage production and hoping Michael continues to entertain us with his television scripts for many years to come.

To take a walk down memory lane with old friends trying to come to terms with the challenges of the 21st century, you can catch up with Diana and Tom over the next few weeks at the following theatres:

*MT had the pleasure of interviewing Jeffrey Holland at the Bristol Comedy Festival earlier this year. To read the interview, go to: https://www.maturetimes.co.uk/another-fine-mess/