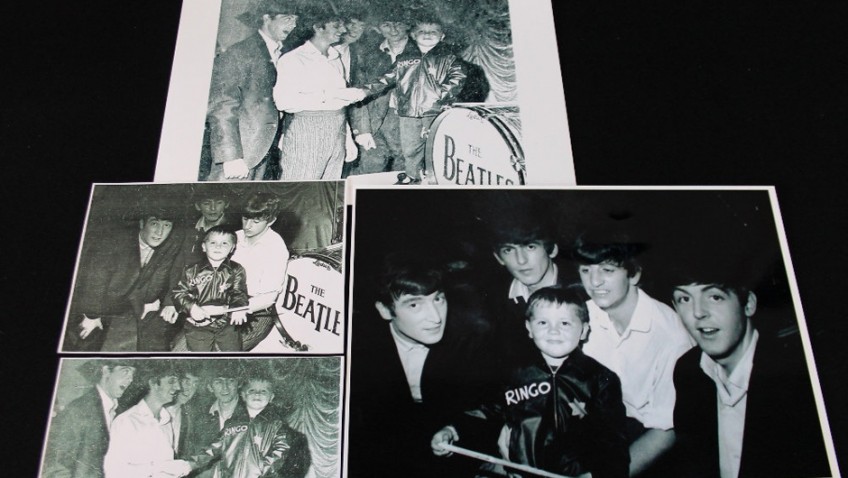 An auction is being held of rare memorabilia collected by Britain’s first ‘Honorary Beatle’ – who ran away as a child to meet the Fab Four.

Russell Jamieson (corr), 56, was just four when he went to his first Beatles show with his brother Dave in 1963.

The youngster dressed in winklepicker boots, mop top, and a leather jacket and was spotted by the band as he danced in the aisle and invited backstage.

He hung out with the band and when he got home Russell was such a Beatle-maniac he then ran away and tried to find them so he could join the group.

He was found wandering the streets of Liverpool and told police officers who picked him up his name was ‘Russell Beatle’.

The band read about what happened in local newspapers and met him again several times – declaring him the first ‘Honorary Beatle’.

They became friends and stayed in touch and Ringo Starr regularly visited his home.

Russell amassed an impressive collection of souvenirs from the gigs he attended as well as amazing memories of his favourite band.

Several items from his collection are now being sold via thesaleroom.com on March 22 – including autographs, photos and the leather jacket that first caught The Beatles’ eyes.

Russell, a chemical factory worker from Port Sunlight, Merseyside, said: ”What I remember about that first gig was the sound. It was very pure rock ‘n’ roll.

“I was dancing in the aisles and I remember meeting them. At one point Ringo took me to his drum set and let me hit them and the crowd just went berserk.

“These items were very dear to my heart and I held onto them for a long time.”

Shortly after meeting the band, four-year-old Russell ran away to join his new friends on tour because he loved them so much.

He added: “I don’t remember much about running away. I think I was wearing some jeans and my favourite Beatles jacket that I used to wear all the time.

“When the policeman found me I told him my name was Russell Beatle. As far as I was concerned at the time that’s what I was called.

“Eventually he must have found out my real name and he took me home.”

John, Paul, George and Ringo saw the story in a newspaper and invited him to meet them and become the fan club’s youngest member – as an ‘Honorary Beatle’.

Russell’s brother Dave, 68, a former roadie for The Rolling Stones, said: “Ringo used to come round our house quite often.

”Me and Russell would sometimes go to his tiny two-up-two-down terraced house too.

“Russell had pictures with the band and he shared Smarties with John Lennon.”

Russell added: “I remember Ringo coming round a lot, he used to play football with me.

“I can’t remember whether he was any good, it was just a kickabout you know.

“He would come round to talk to my brother, but he was my favourite by far and the one we’d see when we went to Beatles gigs.”

Speaking about his love of the band, Russell says that 50 years on he still relies on the Fab Four to get him through a tough day.

He added: “They have always been there for me. Whenever I have needed to listen to something in the good times or bad I can always call on The Beatles.”

They include a set of autographs dedicated to Russell and Russell’s original The Beatles leather jacket.

Also on sale is a Beatles replica collarless jacket worn by Russell, two personal letters from The Beatles fan club and a copy of The Beatles newsletter, signed by Ringo Starr.

It also includes two copies of photographs of Russell with the band.