Home / NEWS / CAMPAIGNS / Look out for the warning signs of malnutrition 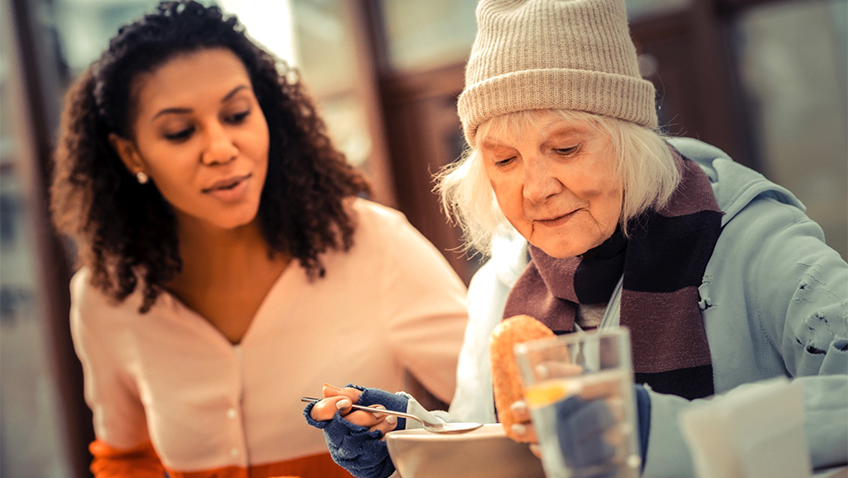 Look out for the warning signs of malnutrition

Age UK and the Malnutrition Task Force are urging everyone to look out for warning signs of malnutrition in older relatives and friends.

Of the 12.2 million older people who live in the UK, over a million (around one in 10 people) over the age of 65 are malnourished or at risk of malnutrition – and the vast majority of those (93%) live at home so often their malnourishment goes unnoticed.

Data from the English Longitudinal Study of Ageing (ELSA) shows that various complex factors are contributing to the rise in diagnosis of malnutrition among older people. These include over 230,000 people aged 75 and over having difficulty with the physicality of eating, such as cutting up food, and above 1.9 million having difficulty eating food because of a dental condition.

Not being able to afford to eat may be another cause of malnutrition, particularly for those older people living in poverty. ELSA’s data states that over 360,000 people aged 50-64 and over 29,000 65-74 year olds admitted having to cut or skip meals because they didn’t have enough money.

Dianne Jeffrey, Chair of the Malnutrition Task Force, said: ‘It is shocking that 1.3 million older people suffer from or are at risk of malnutrition in our country and the root of the problem doesn’t just lie with poverty. There are other contributing factors which add to the risk. Public health messages that don’t always relate to this age group; a lack of ability to shop, eat and drink at home without help. As well as loneliness and isolation, grief and bereavement, poor physical and mental health or a lack of awareness of the risks by health and social care staff.

‘However, whether you are slim or even if you are seemingly overweight, you can still be malnourished and a couple of days of not eating can have serious physical effects for older people. If this is not addressed many of these people will eventually be admitted to hospital which is often the first time malnutrition will be identified.’

Increasing numbers of people diagnosed with malnutrition is a cause for concern because poor nutrition can be both a cause and consequence of ill health. Signs will often go unnoticed until they have made a negative impact on health and wellbeing. Malnourishment can cause long-term health problems for otherwise healthy and independent older people. It can also mean more visits to the GP, increased chances of being admitted to hospital and longer recovery times from illness.

Treating someone who is malnourished is two or three more times expensive for the health care system than someone who is not malnourished and identifying and addressing the problem could result in significant savings. Estimates put the cost of malnutrition on health and social care is expected to be at around £13 billion by 2020 and that figure is estimated to rise further with the rapidly ageing population.

How to spot malnutrition

It is sometimes quite difficult to recognise that you or a loved one is unintentionally losing weight. However, you can look out for warning signs. Some of the things to look out for include rings being loose and slipping off, clothes looking too big, belts needing to be tightened. Look for dental problems, loose teeth, sore mouth or loose dentures. All will make chewing and swallowing difficult or some may just have a small or general lack of appetite.

If an older family member or friend is not getting enough to eat and drink, here are some practical tips that may help:

For a guide on eating well later in life visit: www.malnutritiontaskforce.org.uk/resources