Home / LIFESTYLE / The Magna Carta and 800 years of democracy 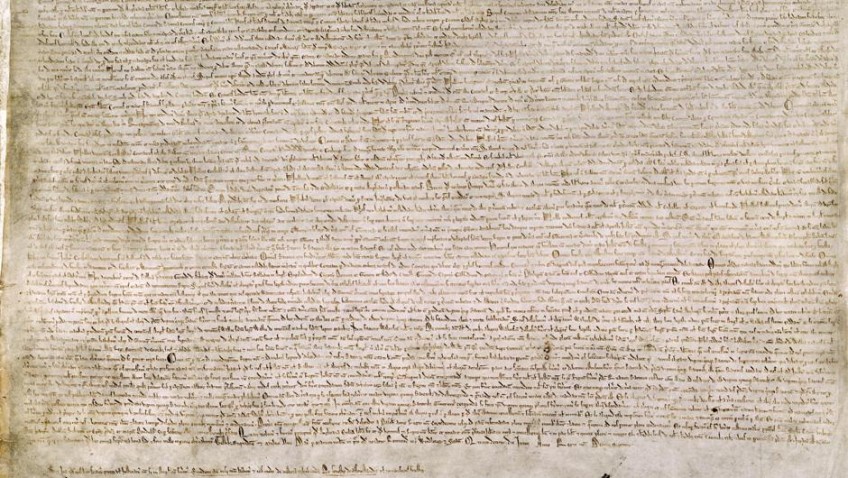 The Magna Carta and 800 years of democracy

We have all heard of the Magna Carta and to most the old joke about where it was signed (on the bottom!) is the first fact that springs to mind.  This year sees the 800th anniversary of the signing (actually on the island of Runnymede near Windsor).  So we should really know more about the history and importance of this event.

Magna Carta, meaning ‘The Great Charter’, is one of the most famous documents in the world. Originally issued by King John of England (1199-1216) as a practical solution to the political crisis he faced in 1215, Magna Carta established for the first time the principle that everybody, including the king, was subject to the law.

Although nearly a third of the text was deleted or substantially rewritten within ten years, and almost all the clauses have been repealed in modern times, Magna Carta remains a cornerstone of the British constitution.

Most of the clauses granted by King John dealt with specific grievances relating to his rule. However, buried within them were a number of fundamental values that both challenged the autocracy of the king and proved highly adaptable in future centuries.

Most famously, the 39th clause gave all ‘free men’ the right to justice and a fair trial. Some of Magna Carta’s core principles are echoed in the United States Bill of Rights (1791) and in many other constitutional documents around the world, as well as in the Universal Declaration of Human Rights (1948) and the European Convention on Human Rights (1950).

Although Magna Carta contained 63 clauses when it was first granted, only three of those clauses remain part of English law. One defends the liberties and rights of the English Church, another confirms the liberties and customs of London and other towns, but the third is the most famous:

No free man shall be seized or imprisoned, or stripped of his rights or possessions, or outlawed or exiled, or deprived of his standing in any other way, nor will we proceed with force against him, or send others to do so, except by the lawful judgement of his equals or by the law of the land.

To no one will we sell, to no one deny or delay right or justice. Although at the time it was the solution to a political crisis in Medieval England its importance has endured as it has become recognised as a cornerstone of liberty influencing much of the civilised world. Magna Carta still forms an important symbol of liberty today, often cited by politicians and campaigners, and is held in great respect by the British and American legal communities.  Lord Denning described it as “the greatest constitutional document of all times – the foundation of the freedom of the individual against the arbitrary authority of the despot”.

Once these ideas of freedom were liberated by the events of 19 June, 1215, and it had been shown that not even the king was above the Common Law of the land, then Magna Carta became an idea which could never be uninvented, or unimagined.

Besides, up to thirteen copies of Magna Carta were quickly made, (complete with spelling mistakes) and sent throughout the kingdom, often to the great cathedrals of England. Magna Carta had therefore gone viral. There were just too many important witnesses to the event, many of whom were the bishops themselves, for Magna Carta to be ever denied or forgotten.

Over the course of the next 800 years, the idea of Magna Carta gathered momentum and assumed a greater authority in respect of the central key clauses concerning liberty and justice.

These central clauses, usually referred to as 38 and 39, have not only stood the test of time, but have a potency of their own which has seen off hundreds of attempts at annulment, repeal, modification and suspension by successive monarchs and governments.

The Magna Carta has been the most valuable export of Great Britain to the rest of the world.

There are now only four surviving copies of the document and for the first time in 800 years they were displayed in the British Library in February and then in the House of Lords for one day.

Two copies are held by the Library and one in Salisbury Cathedral where it can be seen on display.  The other copy is owned by Lincoln Cathedral and currently “on tour” to the USA.