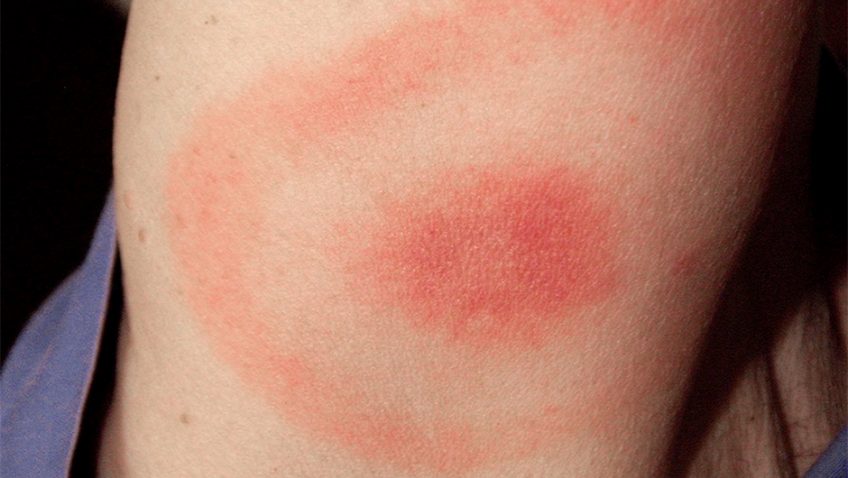 Most people have heard of Lyme disease, but many are unaware of the serious health risk it poses. Public Health England estimates that there are 3,000 new cases of Lyme disease per year, but it is highly likely there are many more that go unreported or undiagnosed.

Everyone who goes outside is at risk of Lyme disease, so it is essential that awareness and understanding is raised; people need to know the facts.

What is Lyme disease?

Lyme disease is most commonly transmitted via a tick bite and is caused by bacteria called Borrelia.

Infected ticks can be found all over the UK, more often in woodland and parkland, but also in urban parks and even gardens. It is possible to be infected in any month, but the highest risk is during spring and summer.

Early symptoms can include a ‘bull’s-eye’ shaped rash, swollen glands, fever, headaches, numbness and tingling, muscle and joint pain and fatigue. If the disease is left untreated it can result in cardiac problems, chronic pain, neurological complications and other disabling symptoms.

Tick bites are easily missed and are not normally itchy or painful. If you know you have been bitten by a tick, it is essential to look out for a ‘bull’s eye’ rash around the site of the bite. Take a photo of the rash and visit your GP as soon as possible.

Lyme disease is difficult to diagnose and, according to Lyme Disease UK, only 3% of GPs have taken the Royal College of General Practitioners (RCGP) course on Lyme disease. In addition, blood tests are unreliable and may give a false negative.

There are steps you can take to lower the risk of being bitten by a tick. When you are outside, particularly in woodland or long grass, wear insect repellent, long sleeves and long trousers tucked into your socks. If there are paths to allow you to avoid long grass, stick to them. Always check yourself and your pets for ticks after you’ve been outside.

The advice is to never pull off a tick with your fingers, normal tweezers or any other tool not designed for the job.

Either contact your GP or carefully remove the tick using a tick remover or a pair of very fine tipped tweezers, ensuring all parts of the tick are removed. If you save the tick, it can be tested for infections.

There is no minimum time a tick needs to be attached to pass an infection, however do remove it as soon as possible.

Early treatment is key in preventing the development of Lyme disease. Treatment should be started immediately if a ‘bull’s-eye’ rash is present.

Your GP will be able to advise on the best antibiotics for you, however doxycycline is commonly prescribed to adults and amoxicillin to children. The RCGP course states that antibiotics should be repeated until all symptoms cease.

The reality of Lyme disease

The reality of living with Lyme disease, especially if diagnosis is not straightforward, can be pretty bleak. One sufferer shared her experience:

Debbie Flay, 59, ran a successful tutoring business, was fit, healthy and walked her dog twice a day. Following one August walk, Debbie noticed she’d been bitten by something and a few days later developed a rash and began suffering from headaches, sore throat, fatigue, low mood and flu-like symptoms.

When Debbie rang her GP and told them she suspected a tick bite, she was given an appointment with a nurse practitioner and not a GP. Debbie was referred for a blood test (which she delayed because her own research found that it was too soon to test for Lyme disease) but the test came back negative.

Debbie’s symptoms continued to worsen and her short-term memory became affected. She was unable to work. Five more visits to different GPs followed, but Debbie was still not given treatment. The fifth GP she saw, through an emergency appointment, did finally refer Debbie to the infectious diseases department at the local hospital, but this entailed a three month wait.

Antibiotics worked in the short term, but Debbie’s symptoms later returned. Debbie has sought tests in Germany, had another ELISA test (a test that can be used to determine if you have antibodies related to certain infectious conditions) in the UK (which was positive) and seen a consultant. Still without a positive diagnosis and suffering worsening symptoms, she asked to see a more senior consultant. She is currently awaiting the results of her latest blood tests.

Debbie is still unable to work, still in pain and still fatigued. She has lost her independence and suffers short-term memory loss.

Sadly, Debbie’s story is not unusual. There have been numerous cases where people have suffered symptoms related to Lyme disease for years before receiving a diagnosis or treatment. Some are still waiting and fighting to be heard.

Lyme disease UK exists to support people who are living with the effects of Lyme disease and are in need of support and guidance. They campaign to advance awareness, diagnosis and treatment of Lyme disease in the UK. For more information or support in relation to Lyme disease, visit: lymediseaseuk.com