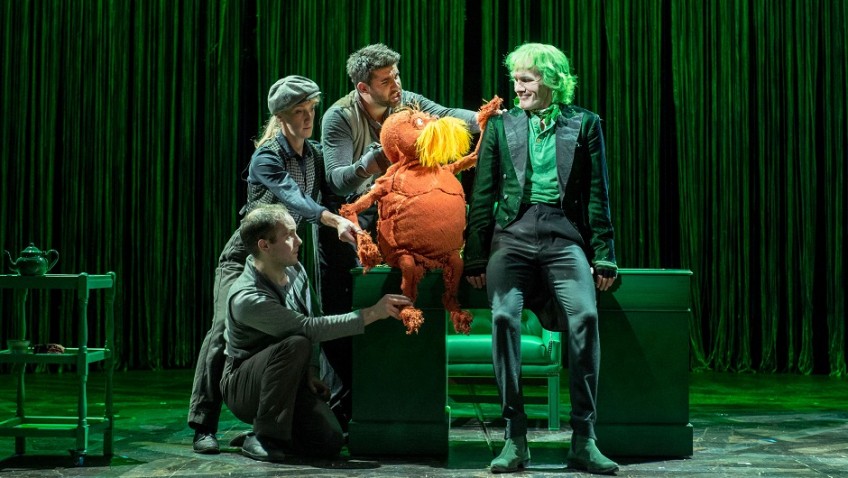 Dr Seus (1904-1991) won a medal in 1980 for his substantial contribution to children’s literature and a Pulitzer Prize in 1984 in recognition of the contribution to the education and enjoyment of America’s children and their parents.

Seus published The Lorax in 1971. The story is an allegory of mankind’s greed and it has a strong environmental anti-capitalist message. The stage adaption in rhyme is by David Grieg.

Since the turn of the century we have lost 13 million hectares of forest (the size of England) every year.

The Lorax, guardian of the forest, attempts to protect his native forest from the Once-ler who is chopping down all the trees.  The Once-ler (Simon Paisley Day) is a prototype human, a land-grabber and businessman who manufactures things everybody wants but nobody needs.

The Lorax, a cantankerous critter, with an orange potato-like body and a walrus moustache, is played by a puppet created by Finn Caldwell. He needs three puppeteers who, in the Japanese Bunraku manner, are always visible. He is voiced by one of the puppeteers, Simon Lipkin, who gives him real authority.

There are also delightful fish and bird puppets.

The music and lyrics by Charles Fink embraces Broadway, gospel and rock numbers.

The inventive, humorous and lively production, directed by Max Webster, designed by Rob Howell and choreographed by Drew McOnie, is aimed at young audiences (6+) but will also appeal to their parents and grandparents. It’s a lovely children’s show for the whole family.