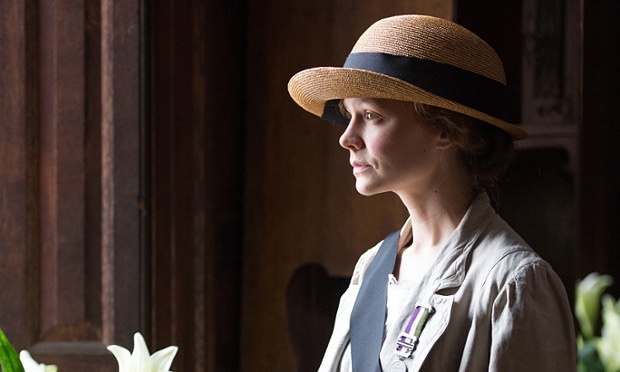 The Opening Night Gala of the London Film Festival (7-18 October) is tonight and that means plenty of soggy red-carpet galas followed by eleven days of films from around the world. All of the Gala films have distributors. That means that, if you don’t mind dispensing with appearances from the stars or directors, you will be able to see them in your local cinema with fewer people and for less money.  The opening film, the star-studded, British drama Suffragette, is released on Friday so you will not have to wait long, either.

There is good news and bad news about the LFF.

The good news is that in addition to the chance (though it’s now sold out) of hearing the hotly anticipated Carol director Todd Haynes (Far from Heaven) in person and of seeing a host of re-issued classics, there is a new central London venue: the Picturehouse, Piccadilly.  The one screening room I have been in was well raked and the screen was proportionate in size to the room.  The large, attractive bar and the roomy ground floor restaurant (a shame, though, about the badly made cappuccino served in unappetizing US size mugs) provide an alternative to noisy in-screen junk food munching, if the public take advantage of it.

The bad news is that ticket prices vary so much that buying a ticket will make switching your energy supplier a piece of cake by comparison.  Galas (all prices ex-Gift Aid) will set you back £20-£28; evening tickets for central London £16.00 (greater London, £12.75); and daytime week-day tickets range from £9-£12.75).  There are concessions (of about a pound) for students, the unwaged and seniors (‘under 16’ tickets are £5.00) but only before 5PM during the week.   Many of the films are already sold out, but the good news is that the LFF website tells you about availability. More bad news is that the BFI persist with their idea of subjectively labelled strands for the galas and for the classification of films in the catalogue.  If you are looking for films by a particular director, you have to rummage through the whole catalogue as there is no Director or even Country (too politically incorrect?) index; only an index of titles.

In the case of the title Dheepan, that won’t tell you much, unless you know that it refers to Jacques Audiard’s (A Prophet) Palme D’Or winner about a veteran Tamil Tiger attempting to return to civil life.

The title Chronic will not tell you much about Michael Franco’s study of a care giver of the terminally ill, and The Club might give you the wrong idea about Pablo Larrain’s Berlin prize-winning film about concealment and corruption in Chile’s Catholic Church.  Listen to Me Marlon might be a confusing title, but it does indeed refer to ‘the’ Marlon – Brando – in Steve Riley’s clever biopic narrated from beyond the grave by an actor who dominated film festivals when he was alive.

The Lobster from the Dogtooth and Alps director who has single-handedly put Greece back on the cinema map, Yorgos Lanthimos, is labelled The Dare Gala, although surely this absurdist, surrealistic Sci-Fi comedy starring Colin Farrell, Rachel Weisz and Olivia Colman is a better fit for the Laugh or even the Cult Gala?  The Cult Gala strand is instead given to the Searchers-inspired western Bone Tomahawk, starring Kurt Russell, Patrick Wilson and Richard Jenkins. One could argue that you cannot determine what will be a cult film until several years after it is made, but neither can you meaningfully label a film ‘Debate’ (there is something to debate in all films); ‘Thrill’ (shouldn’t all great films thrill?); or ‘Journey’ (most good scripts take the lead character on a journey).

If anything deserves the Thrill or Dare title, it is The Assassin, a martial arts period film which earned Hou Hsiao-Hsien the Best Director award at this year’s Cannes Film Festival.  Instead, The Assassin is arbitrarily slotted under ‘Journey’, a category that has a special meaning for The Program, Stephen Frear’s biopic of Tour de France drug cheat Lance Armstrong.  The Journey strand also applies to the documentary He Called Me Malala which sees Pakistan-born Malala Yousafzai travel from the Swat Valley to Birmingham, UK and, at age 17, to Oslo, to collect her Nobel Peace Prize for her courageous campaign for female education.

The good news returns when it comes to the sheer variety of films on offer.  There is something for everyone, even for a 23-year veteran of Death Row in Fear of 13, David Singleton’s compelling indictment of the US penal system.  Death is never far away in Son of Saul either, a harrowing Holocaust drama that won the Grand Prix at Cannes and introduces László Nemes as a new directorial talent.  The theme of confinement continues with Room, in which Lenny Abrahamson’s unsettling film about a child and his mother (a much-admired Brie Larson) trapped inside an 11-square-foot room. In choosing among the available titles those that have a sales company after the credits rather than a distributor are your best bets as, if you luck out, you could see a film that might not be released.   One such film is Truman, a Spanish/Argentinean co-production starring Argentina’s answer to George Clooney, Ricardo Darín (Wild Tales, The Secret in Their Eyes), and Pedro Almodóvar regular (I’m So Excited, Talk to Her), the Spanish actor Javier Cámara (Talk to Her).

The eponymous dog notwithstanding, Truman is a two-hander about two old friends who reunite over news of cancer and talk about the ups and downs in their lives, with the grim reaper lurking behind their the intelligent, and at times funny, conversations.  Another such title is The People v Fritz Bauer about the German post-war Attorney General who committed treason when he asked Mossad for help in tracking down Adolf Eichmann.