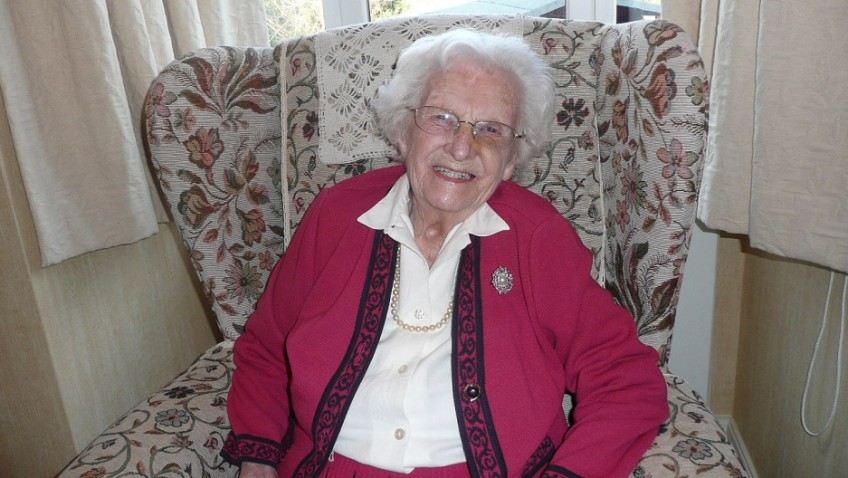 Living life to the full

Centenarian Kathleen Hilton celebrated her 105th birthday with a fry up – and said a full English breakfast was her secret to a long life.

The grandmother of six and great-grandmother of nine has a cooked breakfast every Saturday morning with bacon, sausage, eggs and beans.

And as she opened her annual card from the Queen her son David, 70, recommended it as the key to her longevity.

He said: “She has a full-English every Saturday morning and has porridge throughout the week.

“Kath loves her weekly breakfast. She can’t hold the cutlery – but she can sure eat it all.

“It must be the fry ups which are giving her the long lease of life, that and good genes.”

Kathleen, who has lived all her life in Grimsby, North East Lincs., has always been independent – living alone until the grand age of 100.

Since then she moved to Homefield House care home in Grimsby but keeps up her weekly breakfast tradition.

Kathleen, one of five children, was born in Grimsby on February 10, 1911, to mother Rose and father John.

Her son said: “We took her to see a dentist not too long back in Welholme Road and she suddenly said ‘my sister Phyllis used to go to school here!’

“We had no idea it used to be a school.”

Both tennis-mad brothers David, and his brother John, 65, eventually left Grimsby but their mum has always wished to remain in the town for which she has a great affinity.

He added: “She won’t have anything bad said against the town. All of us moved away but mum still wanted to stay.

“When she went into a care home, we all decided she’d like it best to stay in Grimsby as she remembers all the sights and streets when she goes out and loves the town.”

Kathleen has spent all of her life in Grimsby and, after leaving school aged 15, worked on Grimsby Docks as a book-keeper where she earned around 15 shillings a week.

She also met her husband Matt in the town shortly before the outbreak of the Second World War.

They married but Kathleen decided against wearing white as she felt it would be inappropriate following the tragic death of her brother Leslie – and instead chose a light blue lace dress.

After a long and happy marriage, Matt passed away in 1984.

Kathleen’s bridesmaid was best friend Kath Williamson with whom she shared a serious interest in cooking and baking.

The pair would meet up each week to bake together – and Di still uses their recipes for Christmas cake, chocolate cake and ‘Tassie’ biscuits.

However now her baking days are now in the past, Kathleen still had a delicious cake to look forward to and David is already thinking about next year’s celebrations.