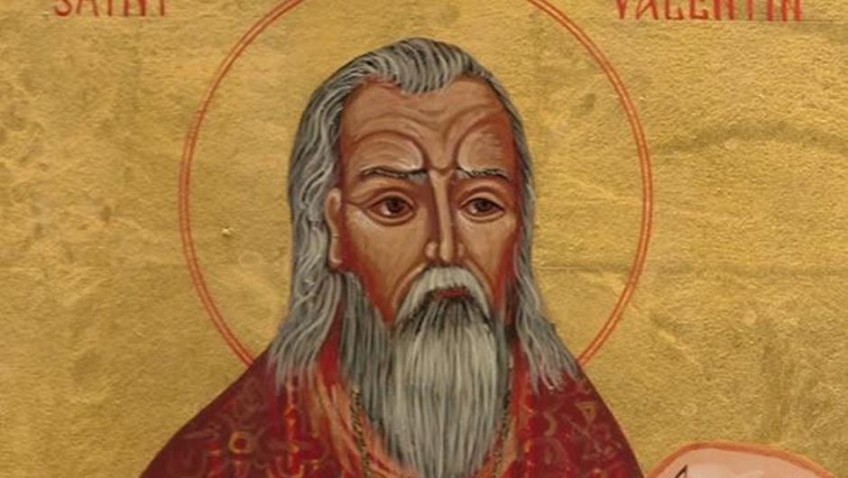 The legend of St Valentine

Here we are at the beginning of February, but already I am fed up with the Valentine’s Day merchandising in the shops and restaurants pressurising us to enjoy a romantic meal.

So I have done some research into why this day has been chosen as a ‘love fest’ and become another marketing opportunity to make even the most romantic of us into cynics.

Numerous early Christina martyrs were named Valentine and the Valentines honoured on February 14 are Valentine of Rome and Valentine of Terni. Valentine of Rome was a priest in Rome who was martyred about AD 496 and was buried on the Via Flaminia. The relics of Saint Valentine were kept in the Catacombs of Rome, which remained an important pilgrim site throughout the Middle Ages.

Valentine of Terni became bishop of Interamna now know as Terni about AD 197 and is said to have been martyred during the persecution under Emperor Aurelian. He is also buried on the Via Flaminia, but in a different location from Valentine of Rome.

There was also another saint named Valentine who was mentioned in early martyrologies under date of February 14. He was martyred in Africa with a number of companions, but nothing more is known about him.

In the 1969 revision of the Roman Catholic Calendar of Saints the feast day of St Valentine was removed and relegated as so little is known of him or them. Stories have it that Saint Valentine was “a priest of Rome who was imprisoned for succouring persecuted Christians.  We also learn that he was persecuted and tortured for refusing to convert to Roman paganism.

Emperor Claudius tried to get him to change his mind but Valentine tried to convert the emperor to Christianity instead.  Because of this, he was executed. Before his execution, he is reported to have performed a miracle by healing Julia, the blind daughter of his jailer, Asterius.

Legend has it that n the evening before he was to be killed, he would have written the first “valentine” card himself, addressed to Julia, who was no longer blind, signing as “Your Valentine. The expression “From your Valentine” was later adopted by modern Valentine letters.

Also according to legend, Julia herself planted a pink-blossomed almond tree near his grave. Today, the almond tree remains a symbol of abiding love and friendship.  Other tales linking him to romance are that he was said to have performed secret Christian weddings for Roman soldiers who were forbidden to marry.

This is probably a myth as the emperor did not ban his soldiers from marrying and actually encourage them to take two or three women after a victory. Continuing this myth, in order to remind these men of their vows and God’s love, Saint Valentine is said to have cut hearts from parchment, giving them to these soldiers and persecuted Christians a possible origin of the widespread use of hearts on St. Valentine’s Day

Saint Valentine supposedly wore a purple amethyst ring, customarily worn on the hands of Christian  bishops engraved with an image  of Cupid which was a symbol associated with love that was legal under the Roman Empire;. Roman soldiers would recognize the ring and ask him to perform marriage for them.  Probably because of the association with Saint Valentine, the amethyst has become the birthstone of February, and it is thought to attract love.

Popular modern sources claim links to unspecified Greco-Roman February holidays alleged to be devoted to fertility and love to St. Valentine’s Day, but prior to Chaucer in the 14th century, there were no links between the Saints named Valentinus and romantic love. The celebration of Saint Valentine did not have any romantic connotations until Chaucer’s poem The Parliament of Fowls, about “Valentines” circa 1381.

Despite all this conjecture there is no evidence of any link between St. Valentine’s Day and the rites of the ancient Roman festival, despite many claims by many authors.  But it has now become entrenched in folklore that the 14th February is the date for exchanging love tokens and romantic pledges.  Nowadays, Valentine’s Day festival is estimated to be the biggest card-sending occasion after Christmas.

I may be an old cynic but my husband proposed to me on Valentine’s Day with a bouquet of red roses, so maybe I can go along with this romantic notion.

Do you have any tales of romance to share at this time?