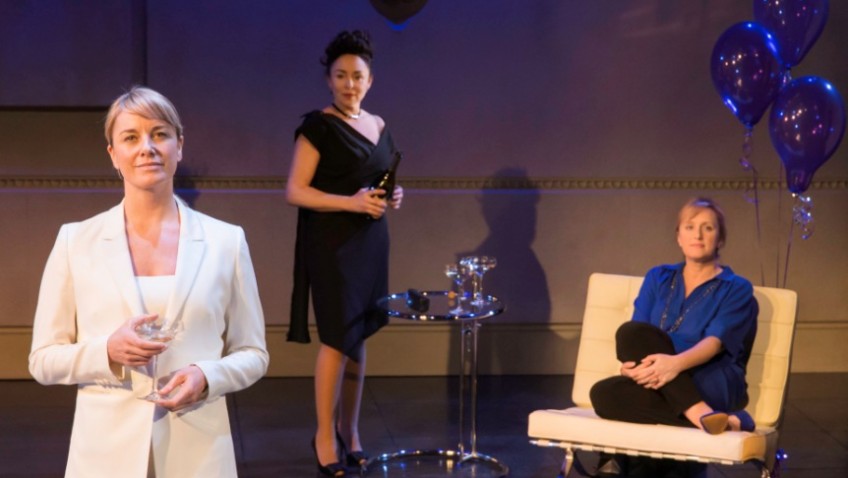 A friend is one of the nicest things you can have

Amelia Bullmore’s comedy drama, first seen at Hampstead in 2012, has arrived in the West End. The production is once again by Anna Mackmin.

Three eighteen-year-old girls share digs at university in the 1980’s. Di is a working-class lesbian and into sport. Viv, a hard-working sociologist, is doing a dissertation on the corset. Rose is jolly and kind and spends much of her time in bed with boys. Her promiscuity is such that it’s a joke.

The girls get on just fine. But how will they cope as women? Will their friendship stand the test of time? The play covers 27 years. There are surprises along the way. It’s not all comedy. There’s rape, illegitimate babies, unhappy marriages, drink problems and ill-health.

Tamzin Outhwaite, who was in the original production, is Di.  She is now joined by Samantha Spiro is Viv and Jenna Russell as Rose. All three are excellent performers; the fact that the actors are in their forties may a bit of a problem for some people when they are watching them playing 18-year-olds.

I asked an usher what the ratio of women to men coming to the Vaudeville Theatre had been so far. He said that audience was 80% women. There’s nothing wrong with that. A drama which celebrates long-term female friendship would be more likely to appeal to women rather than men anyway.