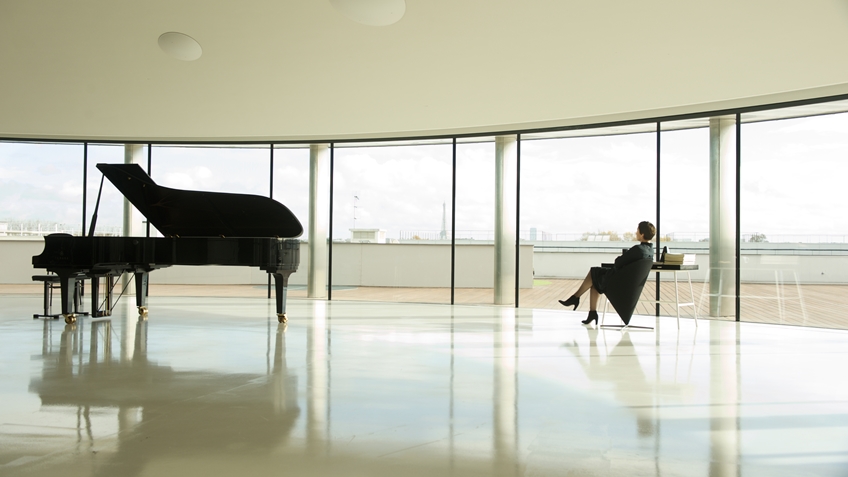 If you liked Good Will Hunting, check out In Her Hands, a romantic and feel-good, if notably formulaic, film from French co-writer-director Ludovic Bernard (L ‘Ascension or The Climb). In fact, In Her Hands is Good Will Hunting, almost plot for plot and character for character; only instead of the protagonist being a closet mathematical genius in the guise of a South Bostonian janitor with defensive anger management issues, Mathieu Malinski (20-year-old Jules Benchetrit — son of director Samuel Benchetrit and the late actress Marie Trintignant) is a closet musical genius in the guise of a Parisian janitor (on community service probation) from the projects, with defensive, anger management issues.

Mathieu is, more specifically, a slightly younger and more handsome version of piano virtuoso Benjamin Grosvenor, only where Grosvenor is middle class and his mother is a piano teacher, Mathieu hangs out with hoodlums and his single mother is a Polish cleaner doing shifts in a hospital.

There is a fairy tale quality to this story of obstacle after obstacle being swept away by the character’s prodigious, mysterious talent and everyone else’s awe and admiration for his raw talent. Mathieu is the kind of kid who, during a robbery, sits down to play a grand piano in such a trance that he does not hear the police coming. Characters go out of their way and put their lives and jobs on the line for a boy, who, like Will Hunting, is suffering from low self-esteem, bites the hand that wants to feed him. We know that will change, but we enjoy watching the inevitable process.

And if Will impresses a class of graduate students taught by nurturing professor Lambeau, Mathieu’s playing impresses students at the Paris Conservatory who have been slogging all their lives only to be passed over by this upstart. Mathieu becomes the protégé of Pierre, the Conservatory’s manager whose private life is on the point of derailing his career and vice versa. Pierre is played by Lambert Wilson (Of Gods and Men, Cycling With Moliere – wonderful) – in the guise of professor Lambeau.

Merely a coincidence! Bernard had no one else in mind but Lambert to portray Pierre, the struggling head of the Paris Conservatory who discovers Mathieu playing a piano in the Gare du Nord, offers him free tuition, and gambles his job and reputation on his hunch that the boy will put the Conservatory back on the map.

But oddly, for the man who can decide who represents the school in the International Piano Competition, Pierre does not play the piano. He depends on his close relationship with the Countess (Kristin Scott Thomas – the Dr Sean Maguire character in Good Will Hunting), a classically trained and talented pianist who missed out on the big prizes because she lacked the passionate feeling for the music that she senses in Mathieu. Bernard wrote the role of the Countess for Thomas who, like Benchetrit, had to have intense piano lessons to go through the motions.

Naturally, too, there is a love interest. In Good Will Hunting, it was Skylar, a Harvard pre-med student from an affluent background and here it is Anna (Karidja Toure), a by-the-book musician from an affluent background. And as in Good Will Hunting, Mathieu does not tell Anna the truth about his background and lets her believe he is sweeping the floor in the Conservatory to pay for his lessons. The relationship between Anna (who is black) and Mathieu is well handled as we see him mellow and learn to adapt as they fall in love.

In sentimental flashbacks we see that Pierre, the Countess and Anna are not the only people who bend over backwards to help Mathieu. When he was growing up, an old man in the building where he lived gave him free piano lessons, but his mother lacked the money to take him to the next level, and he never learned to read music.

This brings us to the litany of obstacles. Aside from class and finances, Mathieu’s inability to read music is a problem in preparing for the competition with a month to spare. But never mind, Mathieu, like Mozart, has an ear and can hear a piece once and play it. Peer pressure is another obstacle, but that evaporates when his friends learn how talented Mathieu is. And it is never very credible to begin with, as kids nowadays recognise that classical music – or anything that will get you on France’s Got Talent – is cool. Mathieu’s kid brother’s accident an hour before the big prize concert is the all-too-familiar race against the clock scene.

The biggest obstacle is the director of the Conservatory (Andre Marcon, from Marguerite) who is bringing in a replacement for Pierre, and Pierre’s wife (Elsa Lepoivre from the Comédie Française) who almost derails Pierre’s masterplan when she confronts Mathieu. Pierre, we learn, might be searching for a surrogate to his own dead son and the marriage has been destabilised by the couple’s different ways of grieving. The wife’s role is so underwritten that she comes across as a bitter, callous woman, but the whole subplot could be a film in its own right.

What feels fresh is the use of locations. Most of the film was shot at the Seine Musicale and in the Courbevoie Conservatory and the competition scene at the Salle Gaveau. Shots of Mathieu and Anna cavorting in front of Notre Dame are balanced by the slightly less touristy, shots of the trendy Canal St Martin.

Bernard’s last film, The Climb (L ’Ascension) succeeded because it was based on the true story of Nadir Dendoune, a French-Algerian from the French suburbs who made the record books by climbing Mount Everest with no mountaineering experience. If Mathieu had been based on a real musical prodigy or had discovered a genuine musical talent during the casting, it could have been another big-hearted crowd pleaser – even – with some good will – a French ‘Shine’.

You can read our review of Cycling With Moliere by clicking here.