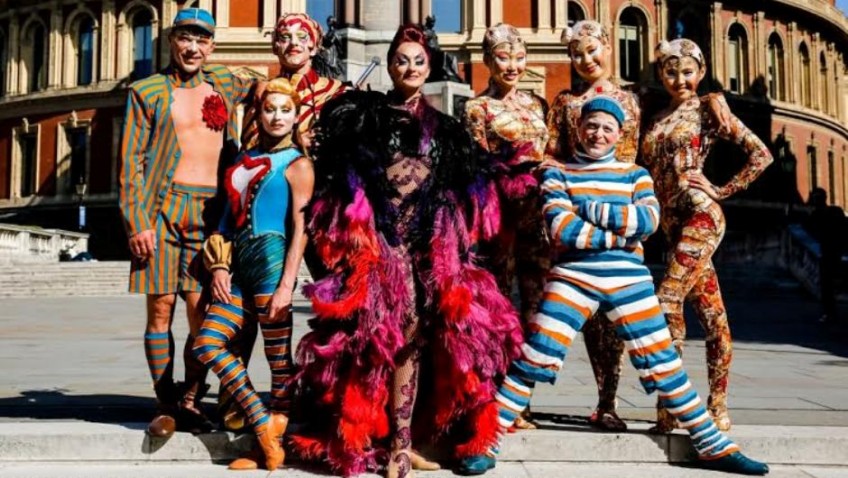 Opening again for its annual residence at London’s iconic Royal Albert Hall is Cirque du Soleil’s latest performance – Kooza.  It’s the story of The Innocent, a melancholy loner in search of his place in the world, Kooza is a return to the origins of Cirque du Soleil: It combines two circus traditions – acrobatic performance and the art of clowning. The show highlights the physical demands of human performance in all its splendour and fragility, presented in a colourful mélange that emphasizes bold slapstick humour.

The Innocent’s journey brings him into contact with an array of comic characters such as the King, the Trickster, the Clowns, and the Bad Dog.  Between strength and fragility, laughter and smiles, turmoil and harmony, Kooza explores themes of fear, identity, recognition and power. The show is set in an electrifying and exotic visual world full of surprises, thrills, chills, audacity and total involvement.

What does this mean in practice?  Well it means an array of acts portraying the story whilst performing some amazing feats of skill. The unicyclist, for example, is just mind boggling to watch – hours and hours of practice must have been spent to hone his skills – and some of the things he gets up to – well if I hadn’t seen it with my own eyes I would never have believed it.

There are also clowns (although they do get a bit irritating at times), acrobats, contortionists, trapeze artists to name but a few, all performing with great skill but nothing beats the Wheel of Death. This is like two big hamster wheels that rotate high above the stage and in each is a performer who goes round and round as the wheel rotates running ever faster to keep up with the speed of rotation.  To gasps from the audience one of the performers hangs on the outside of the wheel as it goes round and round and you watch almost with your eyes closed – especially as you know that there isn’t a safety wire to be seen.

And the contortionists, whilst not as spectacular as some of the other artists, how they bend and shape their bodies makes you cringe with pain – I know if I tried some of their tricks I wouldn’t bet out of bed for at least a week!

I enjoyed the show, the skill and presentation is there to be seen – it is a great way to entertain grandkids – the looks on their faces when they watch would be almost as riveting as some of the performances themselves.