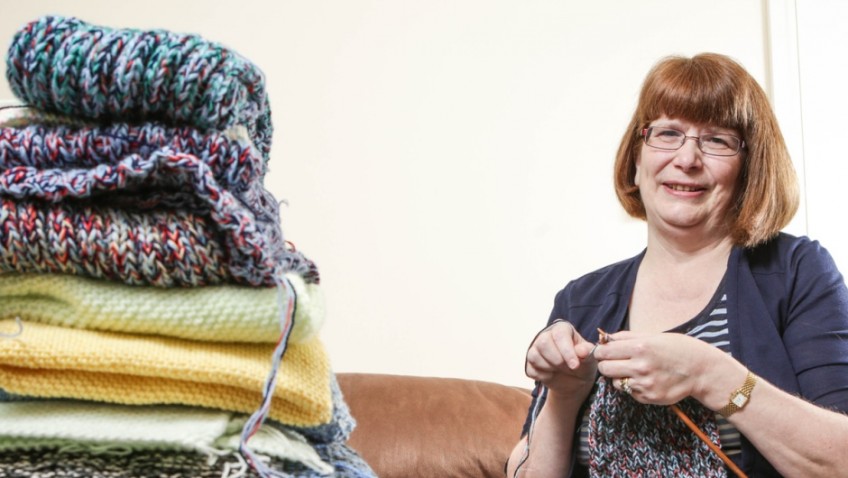 In the knit of time

A super-knitter has completed a marathon ONE MILLION stitches in a month – with just 15 minutes to spare.

Throughout March she has managed to knit 17 blankets, three scarves and 20 bonding squares. She has also managed to raise more than £400 for Kirkwood Hospice in Huddersfield, West Yorks.

She now plans to donate her baby blanket to hospital neonatal units and lap blankets will be given away to elderly people.

She said: “The idea came to me and I put a comment on Facebook in February that I wanted to do this challenge for the hospice.

“I can’t run, I can’t cycle, but I can knit and I find it enjoyable and I thought, let’s do some good.

“Then the next thing I know I had been given a large amount of wool by a customer whose wife had been in the hospice. It was her wool that had been left over when she died.

“He showed up at the shop with a boot full of wool and just gave it to me.”

Despite spending hours and hours with the knitting needles in hand, Julie says she has managed to avoid any repetitive strain injuries, escaping with just achy hands the morning after.

She said: “My hands are a bit stiff this morning, and have been like this over the last two days, but it usually wears off after an hour.

Julie, who runs a family-run newsagents with son Chris, 25, and husband Adrian, 56, in Mirfield, West Yorks., said: “It has been a long month and it has been more of a challenge than I had expected but it has gone quite well. “Although my progress was halted when I had to take a bit of time out with a family illness and to cover at the shop.

“We run the business seven days a week but my son and my husband have been a great help in the last three days and have gone in and covered for me so I can stay at home and finish the challenge.”

Julie, who was taught to knit by her grandmother aged five, said she knits most days and normally has something in progress on her needles, said she wanted to get back into knitting after finding she was starting to spent more and more time on her iPad during the evening.

She said: “When you’ve had a long day at work it’s nice to sit down and relax and I find knitting very relaxing and enjoyable.

“I usually sit with the TV on or some music on but you find you can lose yourself in your own thoughts and it gives you more time to think and have a bit of time to yourself.”

She said: “It was a rough estimate and I have never properly measured it.

“It all depends on what kind of wool you use as some wool knit quicker than others.

“I think I need to get the hands working again before I thinking of taking on another challenge.”