The Tate Britain’s current blockbuster, Van Gogh in Britain does a convincing job of showing how the Dutch painter’s art was influenced by the two-and-half years he spent working in England before turning to painting. But as director David Bickerstaff and producer Phil Grabsky make splendidly clear in Van Gogh & Japan, it was Japanese art that had the most profound influence on the self-taught painter. This is the conclusion you will inevitably reach for yourself if you travel to the Van Gogh Museum in Amsterdam before June 24 or head to selected cinemas in the UK on June 4th. 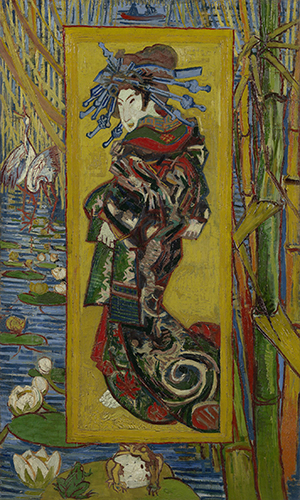 The arts flourished during the Edo period from 1639 to 1854, when Japan, under the Tokugawa Shogunate was closed to outside trade. In 1868 Emperor Meiji officially restored imperial rule and ended the Shogunate, but the 1854 The Convention of Kanagawa opened up trade between Japan and the West. As early as the 1860s artists such as Whistler, Degas, Manet and Monet discovered Katsushika Hokusai, Utamaro Kitagawa and Ando Hiroshige. The ‘Impressionists’ began collecting cheap prints and as the film shows in a montage of paintings, incorporating Japanese technique, most notably the Japanese perspective, into their paintings.

The film provides general biographical details to place Van Gogh’s obsession with what he called Japonaiserie in context. It was in 1880 (long after he left the UK) and at the age of 27 when Van Gogh, after a disastrous attempt to be a pastor in a coal mining community near Mons in Belgium, informed his young brother Theo that he wanted to be a painter. He taught himself, primarily by looking and copying.

In 1886 Van Gogh felt he had to be at the centre of the artistic world and returns to Paris where he meets painters and art dealers like Père Tanguy (from whom Van Gogh purchased paints) and Siegfried Bing, an influential German-French art dealer credited with introducing Japanese art to the west.

In the period 1886-87 Van Gogh purchases a total of 660 woodblock prints (known as ukiyo-e) from Bing with a plan to re-sell them at a profit. He chose the less costly prints, and preferred exotic landscapes and those with bright colours such geishas in kimonos (the camera lingers on Van Gogh’s magnificent interpretation, entitled, The Courtesan). His plan is to curate an exhibition in a café and artists’ hangout called Le Tambourin owned by Agnostina Segatori.

We see a beguiling portrait entitled Agostina Segatori Sitting in the Café du Tambourin. Van Gogh writes to Theo: ‘The exhibition of Japanese prints that I had at the Tambourin had quite an influence on Anquetin and Bernard, but it was such a disaster.’ Sadly, The Tambourin itself went bankrupt five years later. 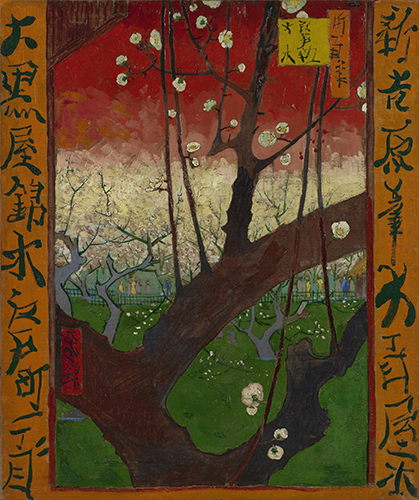 But while Van Gogh’s venture ends in failure, he tells Theo, ‘there’s a heap of 10 thousand Japanese prints’ in Bing’s attic’, and suggests that Theo sell them at Goupils, the international art dealership where Van Gogh worked, briefly, in London and in Paris where Theo was manager of the new rue Montmartre branch.

If Van Gogh’s collection begins with Bing, his fascination with Japanese culture predated it. His uncle had been in the Navy and went to Japan, and in 1885, he saw illustrations by Félix Régamey in The Illustrated London News and Le Monde Illustré. He read books like Madame Chrysanthème

(1883), the first French book on Japanese art – and which contained chapter on Hokusai.

It is typical of Van Gogh that he sees something of himself in Hokusai. Writing to Theo, but using some observations straight out of Gonse, he notes: ‘When Hokousaï draws an engraving, he is concise, swift, impulsive, often brutal … His brush seems to take on an ethereal quality as it follows the amorous flows of his thoughts in a sort of voluptuous delight. Hokousaï then has the ingenuity of a tender soul, soaring above the noisy world; he has the refinement and strokes of genius which only come to an imagination overwhelmed with colour, light and truth.’

Accustomed to teaching himself technique by copying, we see Van Gogh’s The Bridge in the Rain (after Hiroshige), (1887) and Flowering Plum Orchard (after Hiroshige), (1887) which are far from straight copies. But after surrounding himself with Japanese prints in his apartment in Paris, he moves to Arles where his dependency on the prints wanes as he begins seeing through a Japanese eye.

On June 5, 1888, he writes to Theo: ‘About staying in the south, even if it’s more expensive—Look, we love Japanese painting, we’ve experienced its influence—all the Impressionists have that in common—so why not go to Japan, in other words, to what is the equivalent of Japan, the south?… After some time your vision changes, you see with a more Japanese eye, you feel colour differently.’

After Van Gogh’s breakdown in ‘the south’, notably, Arles, in December 1889, he commits himself in an asylum in St Remy. A year later he re-emerges with the anguished, Self-portrait with Bandaged Ear. In the background is an open window, a canvas on an easel, and a loosely painted Japanese woodblock print, probably Geishas in a Landscape published by Sato Torakiyo in the 1870s.

The film features fascinating insights from a variety of Van Gogh experts, including two Japanese artists and academics who shed light on Japan’s relationship with Van Gogh, arguably the country’s favourite western artist. Shodo artist Tomoko Kawao is astonished with Van Gogh’s ability to paint the Kanji characters with one stroke, adding, ‘it makes me think Van Gogh must have understood Shodo.’

As a result of the efforts of Theo’s widow, Johanna, the majority of Van Gogh’s print collection has been preserved and is now owned by the Van Gogh Museum. It is thrilling to see a selection of these prints displayed next to Van Gogh’s work. After seeing this film, you will never again look at Van Gogh’s paintings in the same way.

To find a screening: https://exhibitiononscreen.com/find-a-screening/