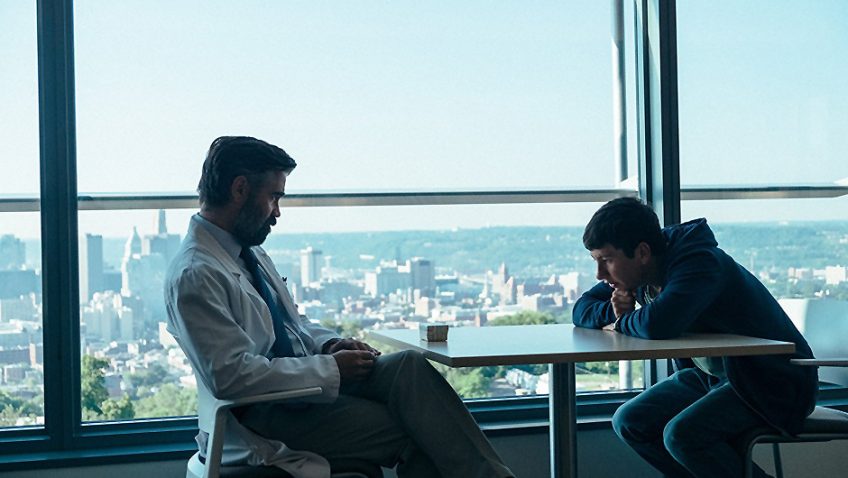 With Dogtooth (2009), Greek writer/director Yorgos Lanthimos created his own brand of horror movie, born of the consequences of patriarchal control taken to the extreme. In a reversal of expectations, the terror comes not from external forces, like a serial killer or home invasion, but is bred within the household. In The Killing of a Sacred Deer

the external and the internal fatalistically collide.

In his follow-up to The Lobster, Lanthimos’s first English language film, he travels to the USA where Colin Farrell and Nicole Kidman (who were last seen together in this year’s The Beguiled) are perfect couple Steven and Anna Murphy. The superstar heart-surgeon and his ophthalmologist wife share a beautiful suburban house with their two seemingly perfect children, 14-year-old Kim (Raffey Cassidy) and 12-year-old Bob (Sunny Suljic). But Lanthimos, again co-writing with Efthimis Filippou, has not gone native. As the title might suggest, their film is metaphorical – and is based on a Greek tragedy. In Sophocles’ Electra, Agamemnon has slain a deer sacred to Artemis, and her wrath will only be assuaged by the sacrifice of Agamemnon’s daughter, Iphigenia. The myth teaches us that actions have consequences for our loved ones regardless of one’s status in society. Some might think beyond Steven, a recovering alcoholic, to Trump and Kim Jong-Un, but there’s no need to. There are no bows and arrows in Lanthimos’ demanding and unsettling allegory, but there is a hunting rifle.

The Lobster was a very dark comedy, marked with absurd situations and surreal images that no one can really take seriously. The Killing of a Sacred Deer

has about it an air of religious solemnity and just enough realism and normalcy in the main family work/life structure to invite you to take it seriously. Granted, the sex between Steven and Anna is a bit weird, but they are a stable, supportive and faithful couple who at least enjoy sex some 15 years into their marriage.

In an astute choice of casting, Barry Keoghan plays Martin, a cryptic, creepy teenager who hangs around Steven although, at first, we do not know the connection. Lanthimos might not have made his casting decision from seeing Keoghan in the recent blockbuster Dunkirk or from his minor role in the awful movie Trespass Against Us. Before those roles Keoghan played Wayne ‘the heartless cat killer’ in the Irish television series Love/Hate. His character here is closer to Wayne. Nicole Kidman in The Killing of a Sacred Deer

Early on Steven gives Martin his new, expensive watch as a gift. At first we suspect the relationship is one of child molestation, but we gradually realise that it’s the other way around. Martin, whose father died in a heart operation, has, it appears, latched onto Steven as a father figure in an unhealthy fashion. Whether Steven feels sorry for the fatherless young man or simply wants to get him off his back, Steven diffuses the relationship by inviting Martin to dinner.

Everyone is very gracious and the dinner appears to be a success. Unbeknown to his hosts, however, there is a subtle home invasion taking place when the three young people get together in Kim’s room. Martin might be on his best behaviour but his cosmic plan is already at work.

In arguably the most unnerving scene in a film with plenty of them, Steven reluctantly accepts Martin’s nagging invitation to have dinner at his home – ostensibly to reciprocate his invitation. Steven makes another big mistake by going to the dinner alone, with Anna’s blessing.

Martin clearly wants to fix up his mother with Steven, ignoring Steven’s unnecessary reminder that Steven is already happily married. If this is a desperate boy’s fantasy, it is one that is shared by Steven’s mother. Alicia Silverstone (Clueless) is chillingly brilliant as the predatory widow who sweetly warns Steven, ‘I won’t let you leave until you’ve tasted my tart.’

While Lanthimos’s casting, scope and settings have altered significantly from his Greek-based and Greek language films, he has not altogether altered his style, which relies on the gap between a kind of hyper realism and acknowledgement of normalcy and the jarring perversity that we witness within this familiar setting and context.

Colin Farrell in The Killing of a Sacred Deer

Here, the realism of the film and science is set against the supernatural aspects of the film and the ancient myth. Steven consults all of the specialists at his hospital who are a loss to explain what is happening to his family. No one in this scientific community dares to speculate on the paranormal. When, in a wink to the viewer, the principal of Kim’s school praises an essay Kim wrote on the Greek tragedy of Iphigenia it is merely to inform a parent of his child’s school performance. And even Steven initially refuses to accept the possibility that powerful gods with superhuman powers might visit earth in the form of someone like Martin.

Kidman and Farrell have mastered the director’s affected way of speaking which here serves to disassociate us from the realistic, contemporary setting and an unusual, but not discordant, manner. Other traits that mark Lanthimos’s distinctive style appear gratuitous, however, as though they are remnants from another film that the director does not want to go to waste. At a professional dinner, for instance, the highly respected Steven matter-of-factly mentions to a colleague that his daughter has just begun menstruating. Martin has an obsession with the hair under Steven’s arms. And in one scene, Anna trades sexual favours with Martin’s work colleague in exchange for information.

In general, though, Lanthimos and Filippou succeed in constructing a disturbing world that brings together the lessons of Greek tragedy and mythology with our modern world: a world in which scientific progress and technology have discounted fundamental principles of morality and human nature.