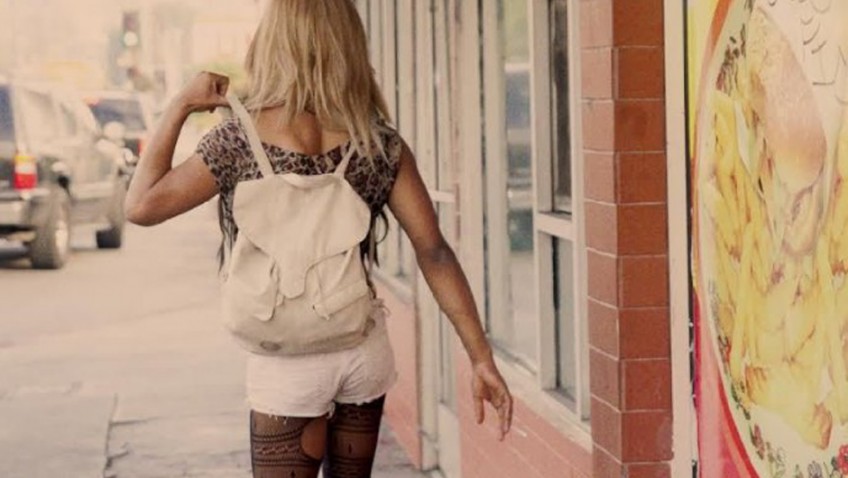 is what American independent cinema is all about:  A spontaneous, genuine cast, some of whom are non-professional actors, inhabiting characters who all ring true; an irreverent, refreshingly original script that is tinged with poetry; and an atmospheric location that is not a film set, but the sleazy side of Hollywood, where dreams come to die.  The film was, appropriate for the subject matter, shot on an iPhone 5s with a budget of £66,000.   (To put things in perspective, the budget for Burnt was £13 million).  A tragic-comedy about the Christmas Eve of two transsexual street walkers might not be everyone’s cup of good tidings, but if you take a walk on the wild side, Tangerine

offers an entertaining new spin on the traditional buddy movie.

After a month in prison, taking the wrap for her pimp boyfriend, Chester (James Ransone), transsexual prostitute Sin-Dee Rella (debut actor, Kitana Kiki Rodriguez) has a lot of catching up to do.  Sin-Dee is sitting with her best friend, Alexandra (Mya Taylor)  at their local, a plastic donut shop, where Alexandra lets slip the news that Chester has been cheating on Sin-Dee with a biological female prostitute whose name starts with D.  They go through the possibilities and nothing rings a bell.

The more cautious and career minded Alexandra decides that Sin-Dee’s mission to find the ‘D’ girl will be ‘too much drama’ and the two friends separate.  We follow their interweaving paths throughout Christmas Eve until they find themselves alone together again early on Christmas Day in arguably the most hauntingly moving ending of any film this year.

Sin-Dee goes off to find her man, and when she is unsuccessful, she tracks down the woman who stole him after learning her name is Dinah (Mickey O’Hagan). Dinah shares a depressing motel suite with three other prostitutes and their various tricks.   It’s anyone’s idea of purgatory, if not Hell. Sin-Dee pushes Dinah out and then drags her around the Sunset Strip for the rest of Christmas Eve, making a stop at a club where Alexandra will be singing.

Meanwhile, Alexander spends the evening handing out cards advertising her appearance at the club where she has paid the owner against receipts.  After a battle with a trick who refuses to pay her turns into a slapstick fight on the streets before two bemused cops,  she finds solace, and a bit of money in the cab of an Armenian cab driver, Razmik (Karren Karagulian).  Their usual place turns out to be a local car wash where Razmik times his sexual gratification to the movement of the carwash.

Razmik, is a family man who provides for his wife and daughter, but is living a double life that his wife might suspect, but prefers to ignore. Her mother, visiting for Christmas dinner, however, is suspicious and determined to expose her son-in-law.  Unaware of his mother-in-laws pursuit, Razmik heads for the club to hear Alexandra sing, but, arriving too late, seeks her out at the donut shop where the film’s chaotic climactic set piece plays out.

is the fifth feature of New York based Director Sean Baker, who co-wrote the film and shares cinematography duties with Radium Cheung, fulfilling the prediction that smart phones would make a wider variety and great number of films available to the public.  That promise sent many a critic groaning at the prospect of an endless stream of duds, but Tangerine

, like Baker’s promising fourth feature Starlet, is a delight.

Baker and his amazing cast manage to stay clear of sentimentality and cliché, balancing humour and pathos with an unsanitized look at their urban underworld, reminiscent in its dark beauty of Jean Genet’s Our Lady of the Flowers

.  Baker handles the shift from a comic to a tragic tone seamlessly as the vulnerability and insecurity of these outsiders hits home in the film’s final ten minutes.