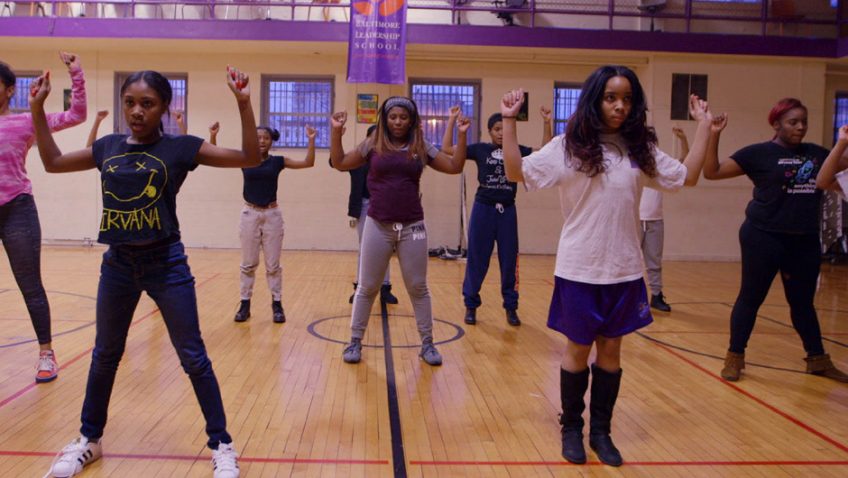 It is not unusual for a documentary film to start out one way and evolve into something different. The superb 2016 documentary Tickled begins as an innocent enough investigation into the bizarre world of online ‘competitive endurance tickling’ and takes director David Farrier and the audience on a riveting, twisted, and surprising journey into the heart of darkness. Director Amanda Lipitz’s documentary Step also evolved from its original brief, but it was always intended to do what it did for the Sundance jury who gave it ‘The Special Jury Award for Inspirational Filmmaking.’ A film about a school that sends to college underprivileged, marginalised black girls living in a politically charged Baltimore ghetto cannot but be inspirational. As a film, however, this crowd-pleaser could use more context, answer a few questions and make a smoother transition as a dance competition takes over.

Back in 2009 Lipitz set out to make a short documentary to publicise an experimental Baltimore school’s mission, one that would focus on the game-changing nature of a school that strove to unlock the potential and motivation of students who might otherwise lack support to prepare for and apply to university or college. Then, Lipitz, the Producer of Broadway hit shows, Dirty Rotten Scoundrels and Legally Blond: The Musical, witnessed two of the students erupt in a spontaneous show of stepping. Here’s where some viewers might benefit from some education themselves, as the film assumes we have all seen last year’s The Fits or have partaken of this performance tradition that has its roots in African tribal dance. Stepping uses the body itself as a percussive and expressive instrument. It is the perfect medium for these girls – and they are all black – to express their desires to make their mark as women and to escape the ghetto where, in the year they graduated, rioting broke out when 25-year-old Freddie Gray died in the back of a police van.

What emerges from the great release that is the step routine is that these young women are both asserting their identities as black women, while refusing to be swallowed up by the ghetto outside.

The film singles out three of the 60 girls who comprise the first graduating class of 2016, all of whom are heading for college. Half of the graduating class are the first people in their families to have gone to college. Lititz weaves into the film interviews with the students and parents, and give us glimpses of the personal lives, family situation and personal set-backs of these girls. We also witness how the faculty members support the students, and their parents with the kind of attention students seldom receive, even in the top private school.

The first of the three girls is Captain of the step troop Blessin Giraldo who is a natural performer and cares about how she looks. Blessin is a beauty, and whether it’s for the documentary camera or a habit, she shows up at dance practice with false eyelashes, nail extensions and a different hair-do every time we see her. Blessin had a rough year in 2015, and with two C’s on her report card and a mother who forgets to show up at parent-teacher day, is struggling to improve her grades. When Blessin is rejected from the college of her choice, devoted college counsellor Paula Dofat goes into overdrive to keep this troubled, but talented girl from falling between the cracks.

Cori Grainger is a role model for her five siblings: class valedictorian and a straight-A student, determined to get into the prestigious John Hopkins University. Cori, aware of how her mother shielded her from hunger and financial deprivation, is aiming for a full scholarship to cover the $60,000/year tuition fees. Level-headed Tayla Solomon is an only child, although her energetic, often overbearingly upbeat mother would have liked more and takes the whole step team under her wing. Tayla loves her mother, but is also sometimes embarrassed about her youthful participation. The context missing from the film is included in the production notes. We learn that director Lipitz, a native of Baltimore and graduate of the NYC Tisch School of Arts was recruited by philanthropist Ann Tisch to be one of the founding volunteers of the Baltimore Leadership School for Young Women (BLSYW). Lipitz involved her mother, Brenda Rever, a women’s issues advocate who grew up in Baltimore, and Rever in turn used her contacts to recruit 30 high powered volunteers. The BLSYW opened in 2009 where the first 120 spots were offered by lottery.

In 2010 the school moved into its own building, a renovated YMC in the historic Mt Vernon section of the city. Questions remain, as it is not explained how that group of 120 graduated seven years later (perhaps junior high school and high school are combined) as a class of 60. The absence of white young ladies is not an issue either.

The main problem with the film, however, – though some would disagree – is that once Lipitz discovers the step angle, this producer of Broadway musicals cannot resist turning the film into yet another dance competition movie with all the predictable clichés (will the underdogs who have never even placed win top prize?) of that genre.

Aided by the otherwise introverted Cori Grainger, Lipitz tries to make the connection between the self-confidence derived from the step competition (Cori had to force herself to join) and the self-confidence needed to excel academically, but it’s tenuous as girls who do not step also get into college. In any event, in the film the dancing receives more emphasis than does the girls’ academic life. We learn nothing about the curriculum, the teachers, the homework, the facilities, nor is there any follow up on the drop-out rate among the 60 students who found places in college.

Then again, watching the team compete is far more visual and entertaining than watching students improve their grades. And these girls and their families are so heart-warmingly honest, vulnerable, decent and deserving that we can only applaud their step moves and their achievements.