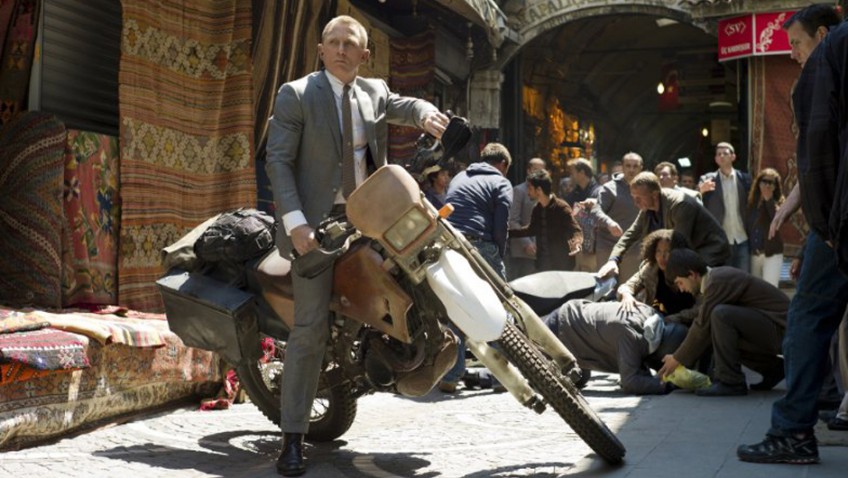 , the 23rd official James Bond film, and the third starring the charismatic Daniel Craig, is the darkest and most unsettling of them all. It is also the most inward-looking, not only in its recognition of home-grown terrorism, but in taking us back to Bond’s roots in Glencoe, Scotland. ‘Bond girl’ Severine (Bérénice Marlohe) is beautiful, but, as the film’s only ‘outsider’, she barely registers as the femme fatale.  It’s MI6 Field Agent Eve (Naomie Harris) who, quite literally, shares the close shave with Bond.  Skyfall

, impressively and tautly directed by Sam Mendes (American Beauty), is an epic thriller that’s been scaled down and insulated.

In Turkey, Bond is after a stolen a document containing the identities of NATO’s vast undercover network. In the wrong hands, agents’ lives and world security would be at risk (a topical problem as we know).

After chasing his man over the Grand Bazaar in Istanbul, Bond drives a tank onto a moving train. Watching her colleague wrestling with his adversary on top of a carriage, Eve has seconds to decide whether to gamble with a shot. It’s M who makes the call from London and when Eve fires, M’s job is on the line.

M is devastated at the news of Bond’s disappearance, but worse is to come. Someone with a personal grudge has hacked into M’s top secret files, and she narrowly escapes an attempt on her life.

The increasing difficulty in keeping the realm safe is one of the themes of this Bond.  No one within MI6 is safe anymore; so where in the living daylights is Bond?

’s release was timed to coincide with the franchise’s 50th anniversary, it was always going to a cause for celebration.  And sure enough, as in a wedding, there’s something old, something new, something borrowed and, quite apart from Daniel Craig’s dazzling opal eyes, something blue. 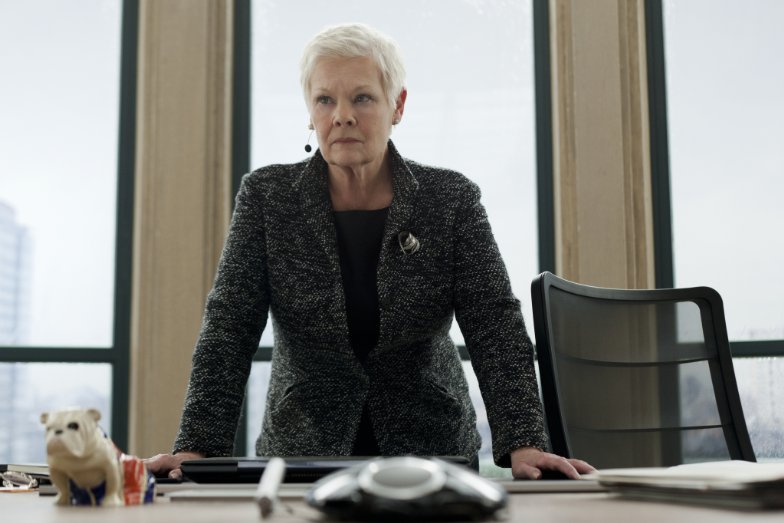 It is the ‘something old’ that permeates this unusually sombre Bond.  Judi Dench, returning for her 7th tour of duty as ‘M,’ is 77; an age unknown in the corridors of the real MI6. Rather than brush this anomaly under the rug, the astute, witty script, by Bond veterans Neal Purvis and Robert Wade (Casino Royale and Quantum of Solace) and John Logan (Gladiator, the Aviator), makes a feature of M’s length of service and age.

After the botched operation in Istanbul, Gareth Mallory (Ralph Fiennes), Chairman of the Intelligence and Security Committee, rushes in to ‘oversee the transition to voluntary retirement.’ The patronizing Mallory (who is later redeemed) tells her: ‘you’ve had a great run. You should leave with dignity.’

When ‘M’ protests, ‘to hell with dignity, I’ll leave when the job’s done,’ you can almost hear the cheering from thousands of workers forced out of their jobs from 2006-2011 by the Government’s National Default Retirement Age and the CBI’s ‘retire with dignity’ campaign.

With the action moving to Glencoe, Scotland for a long, suspenseful finale, 76-year-old Albert Finney (Erin Brockowich, Saturday Night and Sunday Morning) appears as the Bond house caretaker, Kincade. Like M, when the Bond manor house is under siege, this septuagenarian is not about to go gently into anybody’s idea of a good night.

If 007 fails his fitness test, it could be down to his long absence; but even he, at 44, is feeling his age compared to the film’s ‘something new’.  Though 32, Ben Whishaw (Bright Star, Perfume) as ‘Q’, the new techno-whiz from Q Division, looks like an undergraduate nerd.   Q’s character hasn’t appeared in the last two Bonds, Quantum of Solace and Casino Royale, both of which starred Craig; and their meeting at the National Portrait Gallery is one of the highlights of the film.

‘Age is no guarantee of efficiency’, points out the respectful, but confident new Q, the age-metaphors flying.  ‘Youth is no guarantee of innovation’, responds Bond in a delicious repartee cut short by business. The business is, of course, gadgets. Sensing Bond’s disappointment with the spy equipment on offer, Q quips, ‘we don’t go in for exploding pens any more.”  Ouch!

The ‘something borrowed’ is all the echoes of past Bond films. Starting with Adele’s opening title song, so reminiscent of Shirley Bassey, they extend to the location shooting in Turkey; the Aston Martin DB4, and M’s retort to Bond, ‘what are you going to do, eject me?’ as he whisks her to apparent safety. The chemistry between Bond and M is as part of the Bond tradition as the martini, but here it takes on a beguiling mother/son ‘letting go’ tone. 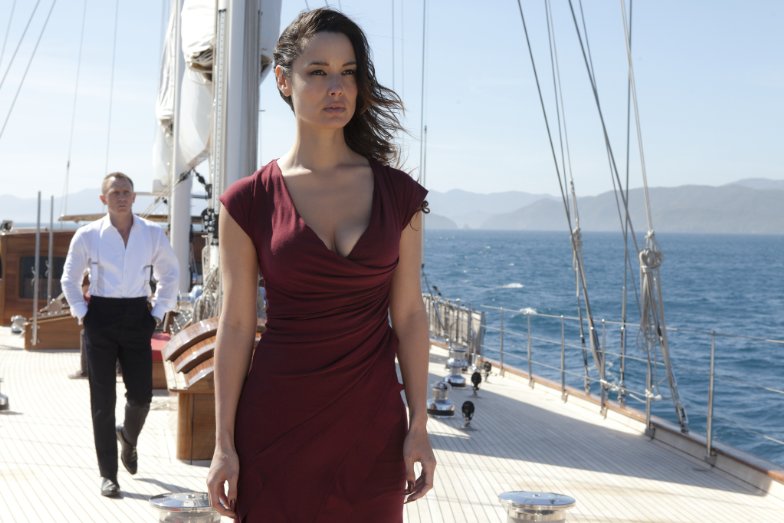 Something new is also the switch from exotic, glitzy, sunny locations to bunkers in London and murky, underground tunnels in Scotland as the spies go into hiding.  This sense of insecurity (M loses her office; Bond loses his London home); self-destruction; and the ousting of the old order are not the only distinguishing features of this new Bond. Notable, too, is a complete disregard for the outside world. Security guards are not called in to protect M and Bond must defend Queen and Country by himself.  Moreover, though all of NATO is threatened, the UK reacts in a vacuum; there’s not even a phone call from Hillary Clinton.

Though the Oscar-winning Bardem (No Country for Old Men, Vicky, Cristina Barcelona, the Sea Inside) creates a chilling psychopathic in his camp, bisexual villain Silva, he, too, is an insider. Rather than attributing his conversion to terrorist on some external group or greed, he blames ‘that old woman’ in a very insular revenge motif.  It’s a testimony to Bardem’s performance and Mendes’ direction that few will be wondering how a loner like Silva managed to amass a fortune and a well-equipped private army.

Though all of the Bond films reflect their era, Skyfall

sets out to be contemporary and topical. When hauled in front of a select committee of younger MPs and officials, M muses, ‘I suppose I see a different world than you. And it frightens me, because our enemy is not visible.’ She goes on to explain that instead of fighting nations, we are fighting individuals – a challenge the police and armed forces are now well aware of.