Home / LIFESTYLE / REVIEWS > / THEATRE REVIEWS / “How is a woman ever to have a husband when the men all belong to their mothers?” asks D H Lawrence 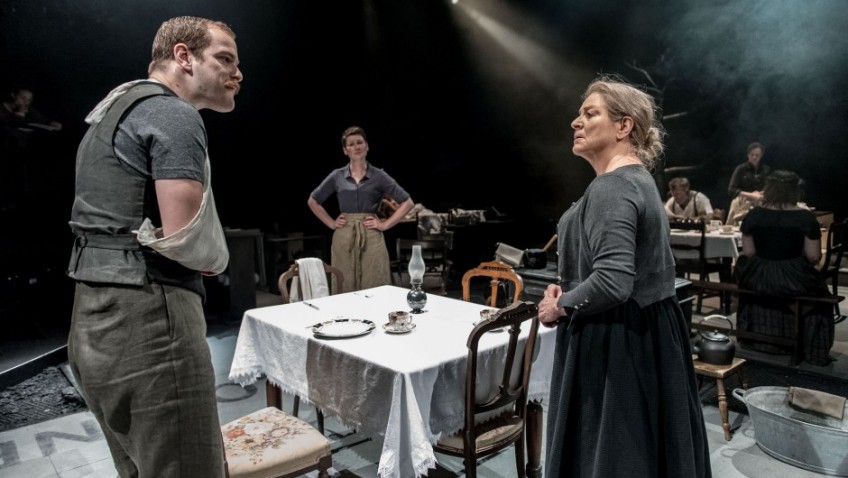 “How is a woman ever to have a husband when the men all belong to their mothers?” asks D H Lawrence

HUSBANDS & SONS is three separate working-class dramas by D H Lawrence, which have been adapted by Ben Power to make one long three-hour play about the marital problems in a mining community in Nottinghamshire at the turn of the 20th century during a time of industrial unrest and during a disaster in one of the pits. The three plays are A Collier’s Friday Night, The Widowing of Mrs Holroyd and The Daughter-in-Law and all three are acted at the same time.

A COLLIER’S FRIDAY NIGHT, written when Lawrence was 24, is like watching bits out of Sons and Lovers. Whole chunks of the novel are there. The family may be called the Lamberts, but they are unmistakably the Morels. There is a possessive mum (Julia Ford) who won’t let her bookish son (Johnny Gibbon) go and a drunken dad (Lloyd Hutchinson) who accuses his wife of bringing up the children to hate him. In THE WIDOWING OF MRS HOLROYD Mrs Holroyd (Anne-Marie Duff) is married to a boorish drunkard (Martin Marquez) whom she has long ceased to love.  A decent electrician (Philip McGinley) begs her to leave him and come away with him to Spain.

THE DAUGHTER-IN-LAW is the story of a six weeks old marriage already on the rocks. The husband (Joe Armstrong) is an ignorant, insensitive layabout who has fathered a child with a former girlfriend.

His wife (Louise Brealey), much stronger, much more sensitive and much better educated, bitterly blames his over-possessive mother (Susan Brown) for his apathy. D. H. Lawrence never saw any of these working class dramas performed. Written between 1909 and 1913, and in dialect, they were a deliberate reaction against the plays of Bernard Shaw, John Galsworthy and Harley Granville Barker and they were way ahead of their time. They were rediscovered by Peter Gill at the Royal Court in the late 1960’s and there have been some fine revivals since.

The Dorfman stage is divided into three separate homes with name tags on the floor to show to which family they belong. The action constantly jumps from story to story and this can be distracting, especially when it leaves the actors in mid-scene holding a position until it is their turn to speak again.

Marianne Elliott’s in-the-round production (which also goes in for a lot of unnecessary mime with imaginary doors and the putting on and off of imaginary overcoats) is, however, extremely well acted by an excellent ensemble and I much enjoyed the performance.

trilogy. Audiences have recently managed to watch much longer trilogies by Shakespeare, Chekhov and Alan Ayckbourn, and sometimes all on the same day, without any difficulty.

The Widowing of Mrs Holroyd suffers most; and its most famous scene, the ritual washing of a miner’s dead body, is curtailed before it has hardly begun.