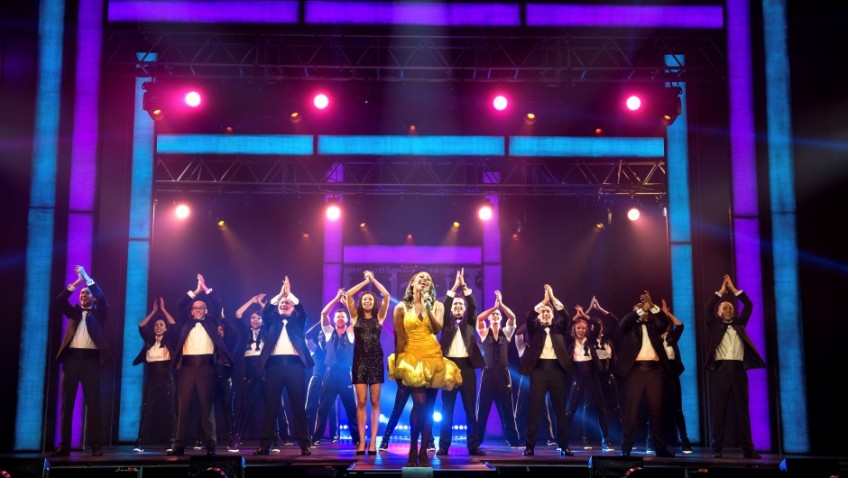 In The Bodyguard, no punches are pulled when it comes to stage effects designed to startle, dazzle and impress. As the band pounds out the beat – big, bold, and brash – multi-coloured lights dance across cavorting legs and torsos, lavish sets glide and shape-shift, cinematic projections roll, and flaring columns of flame shoot on high, hot enough to singe eyebrows all around the auditorium.

Amidst all this, witness the story of pop superstar Rachel Marron, her Stalker, her son, her sister and her (reluctantly) hired bodyguard.

The screenplay for the successful movie was originally written in 1975 by Lawrence Kasdan (also writer of Star Wars films, Raiders of the Lost Ark etc) with Steve McQueen and Barbra Streisand in mind for lead roles. The film eventually came out in 1992, starring Kevin Costner and Whitney Houston. Kasdan didn’t really see his screenplay as a musical, but how glad fans are that Alexander Dinelaris got busy with his tweakings.

Completely over the moon, too, are devoted followers of Alexandra Burke, winner of the X Factor in 2008 (Hallelujah!), who has put album making on the back burner in favour of developing her stage skills and mastering 25 changes of costume.

As she is put, literally, on a pedestal, she travels heavenwards, while clapping, arm-waving and loud singing break out all round the auditorium for the generously long encore finale.

Burke, competent and energetic in the role, is not the one who really steals the show, though. With fine stage presence, great acting skills and super talented singing, it’s Melissa James, as her sister Nicki who really thrills and moves, and brings emotions to life.

In fact, a plot that’s hardly elaborate or well-rounded is much enhanced by the ‘almost’ romance of bodyguard Frank and Nicki. The romance between the main characters has less moving chemistry. Other actors, too, are less subtle and nuanced than James, and, at times, overly rushed, shouty and proclamatory. As serious, professional bodyguard Frank Farmer, torn (a bit) between duty and love, Stuart Reid’s handsome, stand-offish, ‘I am not amused’ face does the job, while the singer’s son, Fletcher (Mark Jones – one of six options) wins hearts with his fine performance.

Mike Denman is the creepy, shadowy, calculating Stalker, but his build up of tension and murderous intent can be spoiled somewhat when a gaggle of (inebriated?) females, boo and hiss and giggle as if at a pantomime.

Fortunately, such vociferousness is less obtrusive at lighter, comic moments, like at the karaoke bar, where a trio of drunken girls, and then bodyguard Frank, show just how mangled and out of tune a song can be.

For fans of the film, of Alexandra Burke or of Whitney Houston, with more than a dozen songs on offer, this show – trite, schmalzy and somewhat stiff though it be – is, of course, sensational.