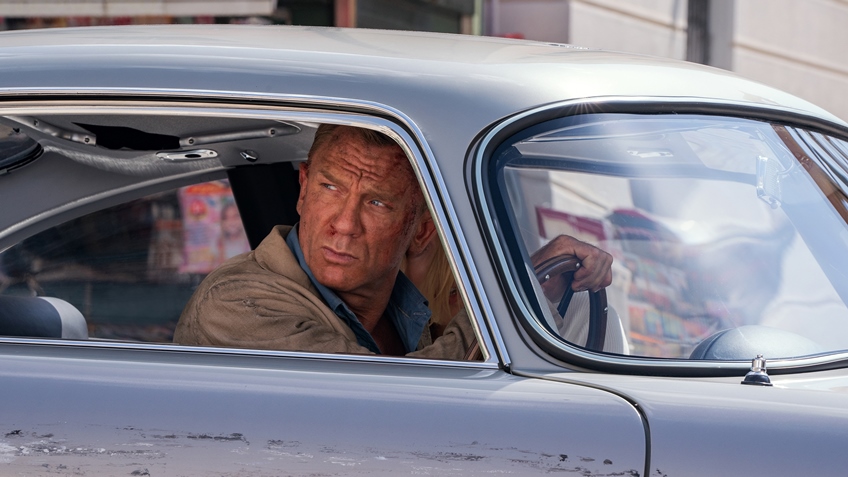 Daniel Craig to the Rescue

Before Covid-19 James Bond’s job was to save the world. Post Covid-19, 007’s task is more challenging: he has to save world cinema. Millions were spent marketing the film’s three aborted launches over the past 18 months, but the challenges don’t stop there. Since Spectre in 2015, there’s been the #MeToo Movement, the Black Lives Matter Movement and the LGTBQ+ rights Movement – not something Ian Fleming spent time worrying about. Fortunately, the franchise’s first American director, Cary Joji Fukunago (Beast of No Nation, Sin Nombre), co-writing with veteran Bond writers Neal Purvis and Robert Wade and Phoebe Waller-Bridge, have given today’s more demanding audiences something worth waiting for.

Yes, there are weaknesses: confusing plot twists, questions of motive and an overlong stay on Safin’s island. Get over them. Daniel Craig’s nuanced performance reveals self-doubt, heart break, anger, disappointment, an awareness of changing protocols and even a paternal side. And each exotic location has one knock out scene worth the price of admission alone.

There is another problem we have to live with – Craig’s Bond films are linked like sequels. As the last in the chapter, No Time to Die gets lumbered with tying up so many loose ends that you better brush up on your Bond since Casino Royale, 15-years ago!

Now, with Spectre mastermind Ernst Stavro Blofeld (Christoph Waltz) in Belmarsh Prison, they are relaxing in Matera, a magnificent hilltop town in Southern Italy, where, it so happens, Vesper Lynd (Eva Green) from Casino Royale is buried. When Bond visits the grave with memories of suspicion mixed with guilt and regret, little does he do know that a motorcycle and car chase later, those same feelings risk ending the longest relationship he has ever had. Call it a professional hazard, but suspicion makes an agent’s love life hell.

In this sequence’s knock out scene, Bond and Madeleine are surrounded in a piazza by assassins pounding Bond’s bullet proof car windows with machine guns. Bond sits calmy, either curious to know how long the windows can hold out, or who could have betrayed him if not Madeleine. Madeleine is writhing in terror as though he is already punishing her. Then he presses the weaponry button on the dashboard and the sports car turns into an armoured tank firing at the assassins on all cylinders.

After Bond puts Madeleine on a train, telling her, ‘You’ll never see me again,’ what must be the longest pre-title (title song by Billie Eilish) prologue in cinema history ends, and the story – “five years later” (with no one ageing) starts with Bond, moonlighting for the CIA, fishing in Jamaica. But Bond’s colleague, CIA agent Felix Leiter (Jeffrey Wright), has come knocking. He needs Bond’s help in finding Valdo Obruchev (David Dencik) the biochemical agent scientist and the duplicitous sole survivor – presumed kidnapped – of a terrorist attack on a plundered lab with links to Hercules. Bond expresses misgivings about Leiter’s new recruit, Logan Ash (Billy Magnussen) who “smiles too much”.

Enter Lashana Lynch, history’s first black and first female 007 who, introducing herself as Nomi, offers a stranded Bond a ride home. It’s not a chance meeting. Wandering into the bedroom of Bond’s tropical bachelor pad, she removes a wig to reveal hair cropped short like Bond’s. His comment that that’s usually not the first thing ladies remove is uttered knowingly as there is no mistaking a 00. Nomi is not a Bond girl. She is there to tell him about M’s Hercules Project, a more precise, conventional weapon than a drone, that has been compromised. It works by inserting DNA-specific nanobots into the target, making it, in the wrong hands, an extremely dangerous weapon. It seems a couple of psychopaths want it, but North Korea, China and Russia (no doubt because of international distribution prospects or geopolitics), are uninterested.

Bond agrees to accompany Leiter and Logan to Santiago, Chile on the trail of Obruchev who reprogrammed Hercules. Nomi follows. She and Bond initially jockey for position and test each other, before, with M’s blessing, working as a team for MI6. Bond has ceded his number to Nomi (‘it’s just a number’) though she magnanimously loans it back later. Bond is about to return to the MI6 fold.

The knock-out scene in Santiago, and perhaps in the entire film because it’s so much fun, is the appearance of a self-described novice agent, Paloma. Paloma, impeccably played by Ana de Armas, appears in a near backless and frontless black gown with slits up to the top of her thighs, leaving just enough fabric to cover her gun. Bond and Paloma infiltrate a Spectre gathering, planning to leave with Obruchev. Suddenly, from his cell in Belmarsh, Blofeld’s voice, projected over loudspeakers, orders nanobots to be directed at Bond. Chaos ensues when, surprisingly, another target collapses and Obruchev goes on the run. Who is calling the shots?

Paloma Kung-Fu’s Bond’s attackers, kicking up an impossibly long, perfect leg, before diving to the floor, spinning around like a roulette wheel and shooting everyone in her 180-degree radius. We join Bond in raising his eyebrows with a rhetorical, ‘three weeks’ training? The chemistry between de Armas and Craig, already proven in 2019’s Knives Out, sizzles, and points to the weaker chemistry between Craig and the striking (particularly in a long, form-fitting white knit dress), but chilly Seydoux.

This is yet another scene where you detect Waller-Bridge’s touch. There is no one-night stand with Paloma before they part ways as professionals. Bond has to rush off to help Leiter and Logan take Obruchev to safety. Here, too, betrayal thwarts Bond’s plan for escaping with Obruchev, making it doubly urgent for Bond to gain access to Blofeld – and another knock out scene – in Belmarsh.

As a villain, Malek’s Safin cannot compare to Waltz. Why does he have pockmarked skin and speak through his teeth in a strange accent? And why does Madeleine have to whisper in a throaty voice that is almost impossible for older ears to register? We can put this behind us when focusing on Bond’s changing priorities with a lover and a likely daughter’s (Lisa-Dorah Sonnet), future, free of Hercules, foremost in his mind. There are capable black and female agents and gay techies like Q (Ben Whishaw) up to the task, but for this mess, there’s only one James Bond.