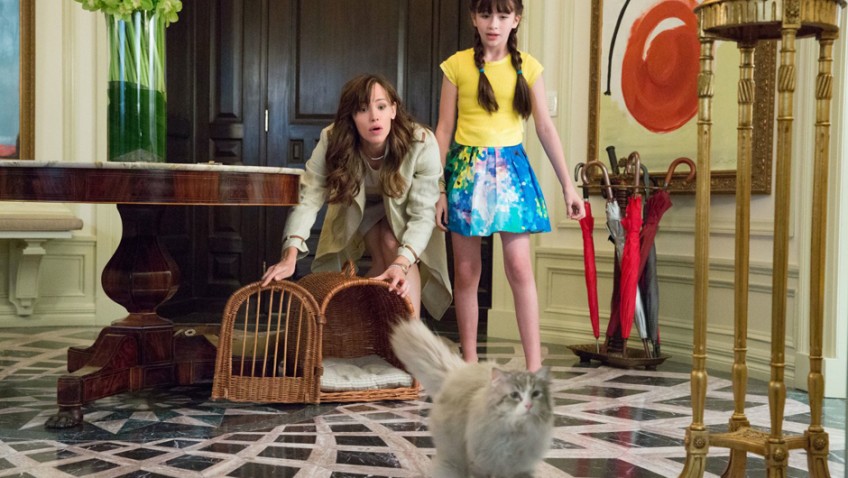 Don’t even bring your cat to this one

This website aims to feature the work of talent over 50 and Barry Sonnenfeld, the cinematographer for the Coen Brothers’ early films, and director of such smash hits as The Addams Family, Get Shorty and Men in Black, is now 63. Sonnenfeld has also become a producer, but returned to directing in 2012 with Men in Black 3, the highest-grossing film of that lucrative cinema franchise. Sonnenfeld is unlikely to enjoy the same rewards for Nine Lives. Cinema audiences only have one life and there’s no reason to spend any part of it watching this film. Tom Brand (Kevin Spacey) is a business tycoon with his fingers in many successful pies. But his obsession is to own America’s (the film was shot in Canada) tallest office building. This obsession is opposed by Ian Cox, an ambitious executive and member of the board (Mark Consuelos) and rival to David (Robbie Amell) Brand’s insecure, loyal adult son from a previous marriage.

As you can imagine, Brand’s success has come at a cost and he is all but estranged from his daughter Rebecca (Malina Weissman) and his beautiful second wife, Lara (Jennifer Garner). Although Brand works with David, he hardly knows him and spends more time showing off rather than teaching him the business.

Lara, who is thinking of leaving Brand, gives him one last chance to show he cares about his family. Although you’d think that a gift is the last thing this fabulously wealthy little princess needs, Lara tells Brand that he has to show up at Rebecca’s 11th birthday party with a gift. After consulting others on a choice of gift, the cat-hating Brand relents and decides to buy Rebecca what she wants: a cat. On the way home to the party he drives to a strange pet shop run by Felix Perkins (Christopher Walken) and leaves with a fury, adult cat. Oddly, Perkins seems to know a lot about Brand and senses his feelings towards the cat.

After leaving the shop, Brand gets into an accident and is put on life-support in a hospital. But he is not dead. Something worse has happened. Brand has become trapped inside the cat’s body. For anyone who hasn’t guessed it by now, Perkins is the equivalent of God in a morality tale. Perkins tells a furious Brand that if he does not bring the family together in a week, his body will die and he will be a cat forever.

But Nine Lives is not ‘It’s a Wonderful Life,’ no matter how much Brand pretends to learn to value all that he has. The rest of the film shows how Brand, with locked in syndrome, struggles in his cat form to make things right with his family. It’s a long, painful haul and there’s nothing remotely funny about it.

When five writers are credited with one film you suspect something is wrong. In this case, it seems the challenge was to find writers who could sustain for 87 short minutes a concept that was probably dead in the water to begin with.