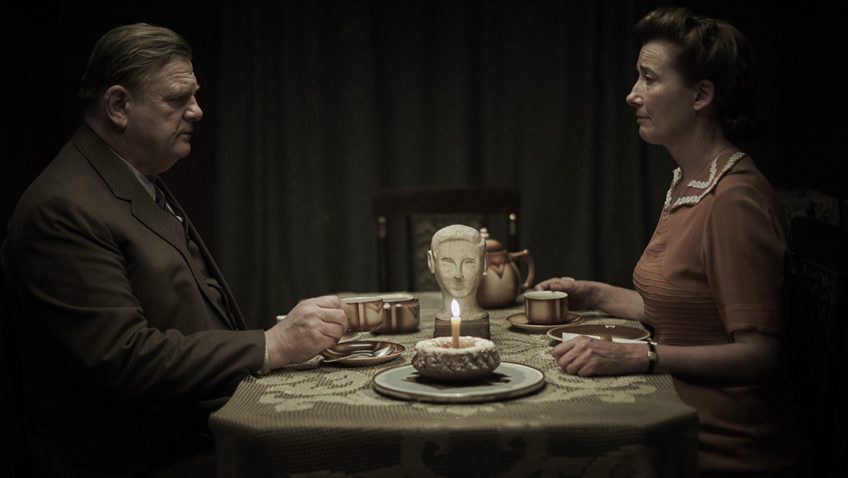 Even if you do not know that the novel Alone in Berlin is based on a true story of ordinary, working class couple Otto and Elise Hampel, and contains many autobiographical elements from the fascinating life of novelist Hans Fallada (born 1893 as Rudolf Ditzen), you instinctively feel it. God, and much godlessness, is in the gritty detail of the novel published in 1947 as Every Man Dies Alone – a spoiler title that is reflected throughout Fallada’s novel. A harrowing reality also permeates the clinical style and taunting, almost cynical, and fatalistic tone of the novel that enables the small acts of love and humanity to burn like rays of sunshine in the dark, dreary Berlin setting.

Though well-acted (albeit incongruously in English) and competently directed by actor-turned-director (The Secret) Vincent Perez, with striking lighting and atmospheric period features, the film is fatally ill conceived. From a rich and grueling tapestry, we are left with a decorous, but threadbare version of what Primo Levi called, “the greatest book ever written about German resistance to the Nazis.”

The film opens with an ethereal scene in which a German soldier is shot down in a thick, green wood. There is a close up of his still handsome face, intact, without a scratch. Cut to the bustling city of Berlin, celebrating Hitler’s invasion of France and the quick armistice. Cut again to a modest, working class apartment building where many of the novel’s characters (most of whom are only footnotes in the film) reside.

Carpenter and mechanic Otto Quangel (Brendan Gleeson) is the respected, if aloof and unloved, foreman in a plant where they have begun to manufacture coffins for German soldiers. Otto and his wife Anna (Emma Thompson) are finishing breakfast when Post Mistress Eva Kluge (Katrin Pollitt) delivers an official letter. Otto hands it to Anna to open although, or because, he suspects what it is. Their only son has been killed in the victorious invasion of France.

Otto is not a man who expresses his feelings and Gleeson’s quietly dignified performance conveys that much about him. A scene in the factory reveals that Otto is a non-conformist when he annoys the Nazi supervisors with a constructive, but misconstrued, suggestion about how to increase productivity. The Nazi representatives accuse him of not being a member of the Communist Party paying the Winter Fuel Allowance. Otto and Anna are not, however, revolutionaries or even heroes. In fact, to avoid drawing attention to herself, Anna raises money for the Nazi Women’s League. In a key subplot, omitted from the film, we meet their would-be daughter-in-law, Trudel, who was, for a short period, part of the student resistance.

Nonetheless, like so many Germans whom history will not remember, the Quangel’s (the word angel floats in their name) are driven to a small act of resistance. Unable to express his anger and grief in any other way, Otto begins writing subversive and incendiary postcards which he leaves in doorways and on ledges across Berlin. He hopes they will be passed on and spark a movement, but all but 18 are immediately handed in to the Gestapo by a fearful public. When Anna insists upon accompanying Otto, their 20-year marriage is rekindled and the bond between them grows.

The essence of the novel, and the plot of the film, is whether Police Inspector Escherich (Daniel Bruhl) will catch the Quangels before the war ends. To his and co-writers Achim and Bettine Von Borries) credit, Perez allows the novel’s inevitability to run its course, albeit denying us the enriching bifurcations along the way.  In the most powerful scene in the film, we realise that the 286 postcards that may cost Otto and Anna their lives have only affected one man. Ironically, that is Inspector Escherich himself. He becomes dangerously obsessed with this inconsequential case that has not only eluded him, but has given him a taste of his own medicine.

While adaptations require compromises and omissions, Perez seems to go out of his way to exclude the novel’s rich array of characters whose lives are interwoven with the finesse of a Gobelin master weaver. He even cuts out the novel’s moment of redemption – unassuming, but all the more potent for it. This refreshingly tender, hopeful sub plot involves Eva Kluge and the rebel son of the vile con man Borkhausen (who appears briefly in the film in a cameo by Rainer Egger). Perez shows us the quietly heroic retired Judge Fromm (Joachim Bissmeier) visiting Anna in prison, and nodding at Otto in court, but neglects to show us that Fromm has ventured out to slip them each a tablet of cyanide.

Similarly, the presence of Eva’s former husband Enno Kluge (Lars Rudolph) is so truncated that we learn nothing of this drunkard, work shy-life man’s existence sponging off everyone and attempting to steal from the Jewish widow (Monique Chaumette) whose suicide we witness. In the novel, the relationship between Escherich and Enno is harrowing as we see how the intelligent, intimidating inspector is able to drive the innocent (at least of the post card crime) paranoid, petty criminal to sign a false confession. None of this makes it into the film as a result of which we cannot enjoy the irony of how a lowlife’s death affects Escherich’s final, noble act.