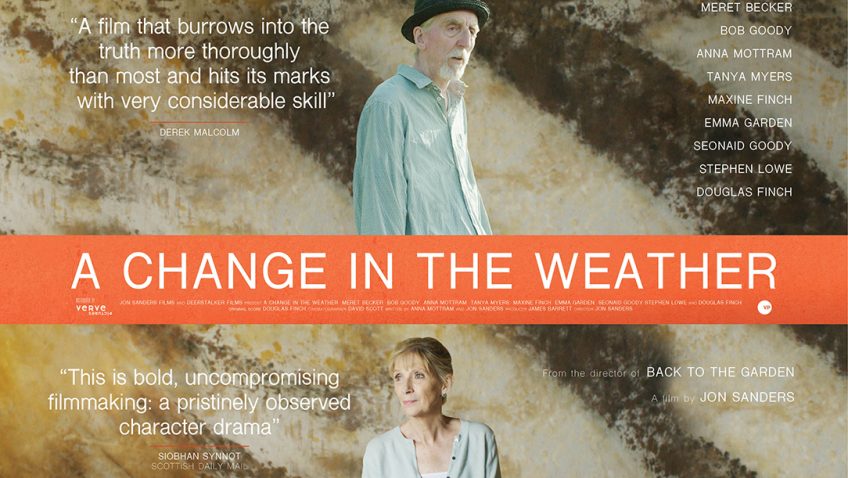 A challengingly slow exploration of love in a 40-year marriage

Jon Sanders’ first feature film in 1998 was Painted Angels, an impressive, engrossing portrait of frontier prostitution in the Wild West, featuring emotionally convincing performances, especially from co-stars Brenda Fricker and Kelly McGillis. Since then, Sanders has remained in a highly idiosyncratic niche, making films with and about older people in a kind of British Dogma style, but with slow pacing, no humour, and little action.

Late September (2012) and Back to the Garden (2014) – both reviewed on the Mature Times website – were shot entirely on location in an isolated house and its riverside garden in Kent, where 74-year-old Sanders was born. His themes – crumbling marriages, invisible single women and characters over 50 dealing with the death of a loved one — and his middle-class, creative-liberal characters do not change very much either. In fact, since Low Tide in 2008, his films have featured Sanders’ wife, Anna Mottram, and their friend, 66-year-old Bob Goody, as a fictional husband and wife team.

This time, along with a metaphorical change in the weather, there is an actual change of location, which enhances the viewing experience. Lydia (Mottram) and Dan (Goody) are on a working holiday in the Languedoc region of France, home of the Cathar religion and what was a tolerant, liberal society. Their gite is adjacent to what is believed to be a burial site from the 13th century Cathar wars, when Pope Innocent III had enough of the apostates; called a Crusade and sent in the troops.

Once again Goody plays a well-respected media creative, workshopping what is hoped will be a successful play about marital relationships. Dan’s real purpose in the Languedoc is to revive his creative partnership with his co-writer wife, Lydia – and his marriage. In place of a plot, we are being given an exploration of love, inspired by Auden’s lines, ‘Will it come like a change in the weather/….Oh, tell me the truth about love.’

When the film opens Lydia is being interviewed by the participants as her stage persona, but the answers she gives sound identical to what Lydia would say. When asked if she minds being a ‘junior partner’ to a successful man, she answers, ‘No, not at all.’ When she is asked about dancing with Bernard (her stage husband) she replies that they do not go dancing.

Later in the film, however, we seen actress Monica (Maxine Finch) – the second ‘wife’ of a successful writer, being asked how she deals with aggressive female admirers – encouraging Dan to dance. He protests, but cannot refuse her. She puts on some music and he really gets into it. Lydia might have been jealous 20 years earlier, but now she admits to herself that she is glad to see Dan so spontaneously happy.

As the languid, hot afternoons roll by, Lydia, the actress, complains: ‘suddenly, I feel I’m Lydia. It always comes back to you and me.’ And throughout the film as the lines between reality and fiction blur, the past and the present merge as well. Gradually the tension between the performers and their characters begins to threaten the collaborative venture and Dan and Lydia’s marriage.

It is difficult to argue that Sanders’ style is an acquired taste. As in all his films, there are some meaningful, very real moments where the characters cut right through to the heart of a relationship. And here there is some beautiful, wild and natural scenery that, along with the Cathar burial site, enhances the melancholy tone of the proceedings. But it is difficult to watch what amounts to 98 minutes of often static, improvised dialogue, particularly from people, who, as Lydia says, ‘have the time and money to travel, and we do.’ You would never know it from their insular, touchy-feely conversations. Sometimes naturalism is overrated.

And then suddenly, there is a scene of such emotional depth that it shakes you.
Lydia has been observing Dan, acting like a new man with actresses Monica and Kalle (German actress and singer Meret Becker) and thinking about her own past and present. She realises from the interviews that she has indeed been suppressing her desires in order to support her husband. She has lost interest in this project and in their marriage.

Dan refuses to admit that the marriage is falling apart and thinks that 40 years of marriage is enough reason to stay together. Lydia, who earlier in the film discusses with Kalle the difficulty of starting over, nonetheless wants to liberate them both to find happiness again. Dan needs her, or needs the idea of a wife like Lydia. She wants him to want her and to love her.

Dan and Lydia are both close with actress Kalle (German actress and singer Meret Becker), who supplies the evenings’ entertainment (a feature in Sanders’ films) by singing the apt Melancholy Baby. Kalle has a lovely singing voice, but it is often difficult to hear and/or understand what she is saying in the dialogue scenes. However, in one scene, her message is loud and clear. Her hysterical over-reaction to the news that Lydia is leaving Dan is so peculiar that you begin to feel you are missing something.