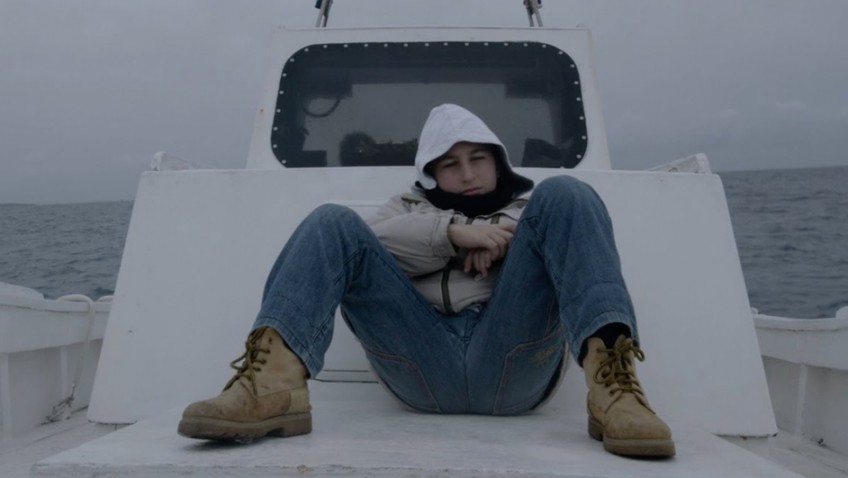 Like Lesvos, that sleepy Greek island on the North Aegean Sea, though much smaller, Lampedusa was once a dry, sun-drenched island 205 kilometres off the tip of Sicily, and Italy’s most southerly border.  The world once passed it by as its 6,000 inhabitants fished, farmed and offered a rustic get-away for discerning tourists.  Now, with their proximity to Libya, both islands have been altered beyond recognition by migration. Fire at Sea is a sensitively observed and beautifully shot and styled documentary about the ordinary lives of Lampedusans, who co-exist with the horrors the media attention and the politics of mass migration to their island.  Fire at Sea not only stretches the boundary of what can be considered a documentary, but in it, a star is born.  The main character, a boy of about 12 named Samuele, is the most endearing, compelling and charismatic character in any film made this year, and, playing himself, he is a natural. For most of the film we watch Samuele, his fisherman uncle and his religious, traditional grandmother go about their daily routine.  We know little of what became of his mother and father or his early life. But Rosi weaves in another story which makes Samuele’s life enviable. Listening to the radio, the grandmother hears a news bulletin that 206 people were pulled from the sea, some dead, including women and children.  ‘Poor souls’, she murmurs.

There is little outside entertainment for children so Samuele and his friend make their own fun.  They go out shooting cactus leaves and birds with a slingshot they’ve made and shoot anything that moves with play guns.  ‘To break this handle, it would take the will of god,’ states Samuel, proud of his handiwork.  They wander alone at night in the briary, rocky landscape ignorant of the fears children have today in a bustling city.

A DJ plays romantic, old fashioned Sicilian music to ladies calling in with requests, all of whom he seems to know.  The radio is the grandmother’s source of entertainment as she cooks, sews and remembers other fires at sea that she describes to Samuele.  She recalls listening to the thunder storms long ago while her husband was away. ‘It was like a fire at sea,’ she says, describing life during World War II, though this is clearly the most loaded image in the film.   In fact, Fire at Sea is also a song that the grandmother, or another elderly lady, dedicates to her son on the radio programme.  It is dedicated ‘to all the fishermen who cannot go out to sea.’

Samuele accompanies his uncle fishing and gets sick-sea in their small boat.   If Samuele is meant to carry on the family business, he has to shape up, and the uncle recommends standing on the swaying dock or going out to sea more instead of playing so much.  In a hilarious scene Samuele fails to get to grips with his English homework and later slurps the pasta that his grandmother has prepared to accompany his uncle’s freshly caught oysters for which the island is known.

Doctors play an important role in the film. The eye doctor changes Samuele’s life when he diagnoses a lazy eye.  Samuele has to wear an eye patch over one eye to ‘train’ the other to look harder.  You might think that is symbolic, but Rosi is too subtle for even that wonderfully naturally symbolism.   Samuele, who has no direct contact with the immigrants, only gradually gets used to wearing the intrusive patch, and as he does he appears more vulnerable.  In another scene, Samuele goes to the doctor complaining of breathing problems and allergies. ‘It’s not the allergies,’ the doctor says, ‘you’re a little anxious.  Is Samuele looking for sympathy or attention, or is the human crisis going on at the fringes of his routine encroaching into his world?

Dr. Pietro Bartolo is preoccupied by far more serious health conditions.  He is also the film’s messenger and, somewhat unbelievably, the only link between the human misery of the migrants arriving on the island and the locals.  Throughout the film Rossi, who was given access to the island’s detention centres, returns to the doctor, who tells us that he cannot get used to the suffering he sees. He talks about a boat that was burnt by the fuel stored irresponsibly in the hold that caused a fire (that fire at sea again).  ‘First class pay $1,500, second class, $1,000 and the rest in the hold pay £800,’ he comments. We witness a rescue mission where half dead boys are pulled out of the sea and thrown into rescue boats like a catch of eels still squirming with life. The doctor says that one man is so dehydrated he has to be put on a drip urgently or he won’t make it. Many others, all males, are already dead.
The final shot is not of the sea, but of the grandmother making a large matrimonial bed surrounded by catholic statues that she kisses.  These domestic rituals might summon up images of the Muslim prayer rituals and all those who will be without a freshly made comfortable bed for a long time to come.

Gianfranco Rosi is a former Eritrean immigrant who not only writes and directs, but is a one man sound and camera crew as well.  In making his 2013 documentary, Sacro GRA, about the literally marginalised lives of the inhabitants of Rome’s ring road, Rosi spent two years with the people he ultimately featured. Many are highly idiosyncratic, and he films their lives without commentary or judgement.  Rosi also spent just under two years on Lampedusa, and has made a film that shares with Sacro-GRA, a fascination with marginal lives that he imbues with dignity, stature and empathy.  The two films also share a welcome absence of narration or expository explanation.   In Fire at Sea, this minimalist approach causes some confusion (none the characters or their relationships are explained) and a bit of frustration at times, perhaps because we want to know more.