Home / LIFESTYLE / REVIEWS > / FILM REVIEWS / A sequel too far – what about Missle Tow for an encore? 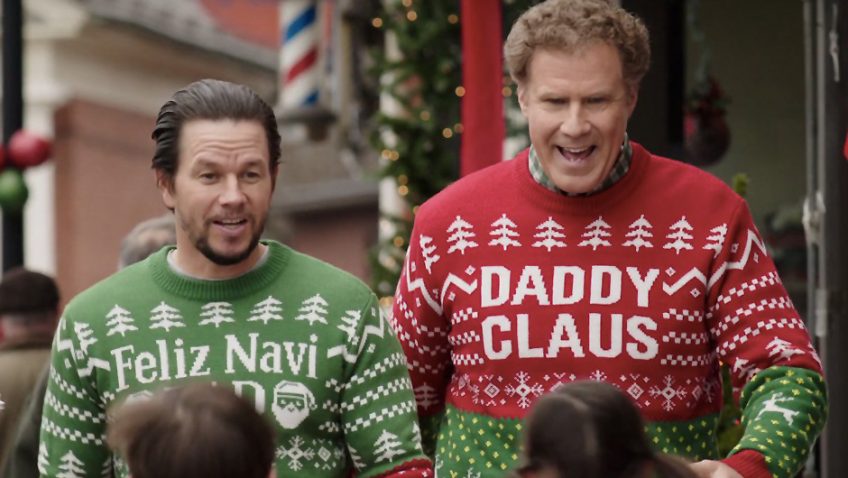 A sequel too far – what about Missle Tow for an encore?

America is a land of contrasts and nothing demonstrates this more than the two genres the nation has pretty much cornered: the modern family comedy sequel and the Christmas movie. Daddy’s Home 2

is a sequel to Daddy’s Home, shoe-horned into a Christmas movie. It benefits from hedging its bets as the new rivalry introduced with the sequel is too flimsy to go the distance. That said, it is given a raison d’être and more (generally wasted) potential for jokes with its Christmas setting. If Daddy’s Home 2

, again co-written and directed by Sean Anders, is, like Anders’ Horrible Bosses 2, a disappointing sequel, it is not a total write-off.

In Daddy’s Home, the rivalry between ultra cool, macho, but undependable estranged dad Dusty (Mark Wahlberg) and nerdy, accident prone, but polite to a fault and reliable stepdad Brad (Will Ferrell) ultimately leads to a truce as the two dads begin co-parenting. They do this initially for the sake of Sara (Linda Cardellini), Brad’s wife and Dusty’s ex-wife who has to tolerate this infantile one upmanship, and for the sake of Sara’s two children with Dusty.

When we rejoin the extended families in this sequel, Dusty and Brad have built a friendship out of their co-parenting routine. Sara and Brad have their own toddler, while Dusty and his aloof, sexy girlfriend (Alessandra Ambrosio) have custody over Sara’s troublesome teenager daughter with her ex-husband (John Cena), who appeared at the end of Daddy’s Home and stole the scene.

This carefully balanced co-parenting routine is threatened by the arrival of the children’s granddads for Christmas. If Dusty and Brad are chalk and cheese, so are Dusty’s estranged, caveman dad Kurt (Mel Gibson) and Brad’s lip-kissing, touchy-feely dad Don (John Lithgow).

The rivalry between the two granddads predictably mirrors the rivalry in the original film between the dads. We are, of course, meant to see how and why Dusty and Brad turned into the men they are. The sins of the fathers looms large over this obvious, but strained, new rivalry as the two granddads try, in their own ways, to win over their grandchildren at Christmas time.

Anders’ attempts to go serious psychological on us, are less effective than the humour, although that is in short supply. In one scene when the four men attend a school show, Kurt says he is going to the men’s room. Dusty sees him picking up a young woman – the story of his life, and why their home was a broken one. Gibson must have had that scene written into his contract, but, realism aside, it does show that Dusty has matured, as opposed to his own father, who has never learned.

Similarly, the Brad/Don relationship isn’t all cuddles and kisses in their close relationship. Jealous of Brad’s relationship with his father, Dusty lets slip the fact that Don is not telling the truth about his wife (Brad’s mother) being at home ill. In fact, the two are divorcing and Don is the last to know. This revelation might be meant to level the playing field a bit as it shows how Don still considers Brad a little boy, too immature to tell him about the divorce. Or, it could demonstrate how difficult it is for Don to disappoint his son, a chip off the old block. Brad and Dusty might be stereotypes, but they can be seen to represent two types of American masculinity: the constant, gentle husband who is willing to cry at a film and is so inept at DIY that he wrecks the Christmas decorations; and the macho, gun-toting motorcycle rider who is woefully out of touch with his feminine side. There is not much more humour to be squeezed out of these types in Daddy’s Home 2

, but Will Ferrell is so into his character that he still, just about, makes us laugh.

To his credit, though, Anders does save the best for last. On Christmas Day the family, by now completely dysfunctional and depressed, cannot wait to leave the enormous, luxurious house that Kurt had rented for the holiday (his first major show of one upmanship over Don). As they head home (once again, Mark Wahlberg has used his clout to ensure that the entire production be shot in Massachusetts where he was born and raised), a snow storm blocks the auto route. They have no choice but to join a couple of hundred other travellers in celebrating Christmas – Los Angeles style – at the local Cineplex. This comes complete with the two father-son teams leading a rousing sing-along to Do They Know It’s Christmas.

Due to the storm, all of the films screening at the multiplex are sold out except for one that is understood to be a family Christmas film, Mistletoe. With the entire family, including the toddler, seated in the front row, the film turns out to be a dark, violent thriller entitled Missile Tow starring Liam Neeson. From the bit we hear – it’s Neeson’s voice – it sounds outrageous – much funnier than Daddy’s Home 2

. Forget about Daddy’s Home 3. Can this be Sean Anders next film – please?