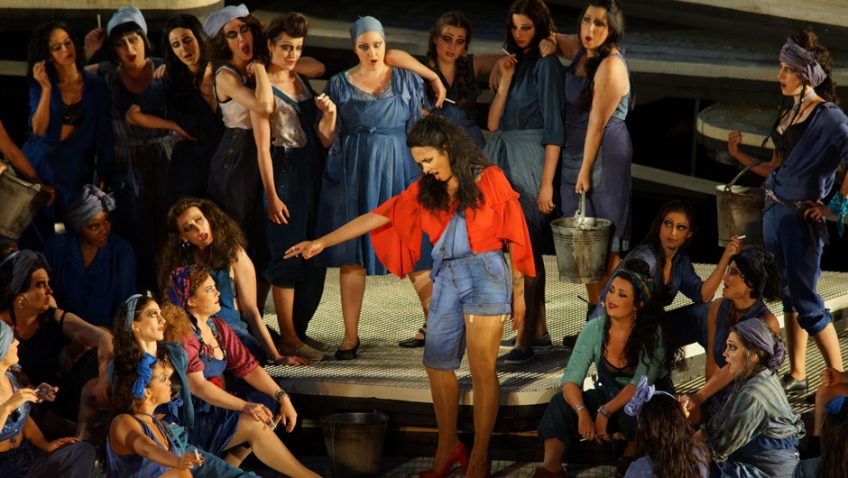 Kasper Holten’s thrilling production of Carmen, with Paolo Carignani beautifully conducting the Vienna Philharmonic stars the sexy French mezzo-soprano Gaëlle Arquez and the passionate Swedish tenor Daniel Johansson. It is an experience to savour and you can, thanks to Event Cinema. And, given the unpredictable weather in Bregenz, Austria, there’s a definite advantage to enjoying Georges’ Bizet’s most famous opera in the comfort of your nearest participating cinema. The lake is Lake Constance, which is the natural backdrop for the 7,000 strong audience seated in an amphitheatre on the shore. Every two years, designers from around the world compete to come up with the most dramatic sets that embrace the unusual setting. Es Devlin’s design for Carmen – two gypsy hands tossing a set of fortune telling cards in the air – is both surreal and symbolic. The cards, 30 square meters each, convey a smuggler’s den, a mountain hideout, a market place and more. Luke Halls’s video projections add to Devlin’s concept by showing, in one dramatic scene, a queen of hearts for Carmen and knave of clubs for Don José. The cards represent chance, fate and freedom.

Whatever atmosphere you lose in adding water to the dry, arid town of Seville and the surrounding mountains and in dispensing with the interior taverns, and prop-supported market squares, you gain by the sheer novelty. In one scene Carmen (a dead-ringer body double) escapes across the stage, plunges into the water and swims away! In the Gypsy Song in Act II, you have to imagine the tavern of Lillas Pastia, but not the gypsy dancing that Carmen narrates: ‘The rods of the sistrums gingled with a metal ring/to this strange music the gypsy girls rose/ Basque tambourines keeping the rhythm/and the guitarist in a frenzy…’

And Signe Fabricius’ (a regular at the Royal Ballet) delivers a dancing frenzy with her choreography that gives a new meaning to water aerobics. Knee deep in the water lapping the stage, the women in long purple skirts kick their long legs over the heads of the men who leap from the water, twirling around in the air. When the dancing turns into one big, artistic water fight, you just hope there’s a sauna back stage. Less successful is a kind of Matthew Bourne rip off where two male dancers engage in an intimate dance to the death between bull and matador.

Carmen, opera’s great femme fatale, is given a pantomimed back story when a Spanish boy bullies young Carmen (Efsa Topal) for her cards. She surprises him by boldly kissing him and he releases the cards. The parents call their children home and Carmen, left by herself, tosses the cards in the air.

As an adult gypsy, Carmen is merciless and poor Don José never stands a chance – not even when his village sweetheart Micaëla (plaintively sung by Elena Tsallagova) comes to the village where his army unit is stationed to bring him money, a letter from his mother and a kiss. As we all know, Carmen bewitches the country boy and he deserts his unit, runs off to the mountains with the gypsies, and is ultimately ditched for the torero Escamillo (Scott Hendricks). Carmen does not love Escamillo but she feels dangerously close to Don José and equates real love with the loss of independence and freedom that is a gypsy’s preserve. It’s easy to see why men swoon over this Carmen. Arquez, with her pretty face, olive skin, big brown eyes and long black hair is the epitome of a Spanish beauty. When her colleagues sing, ‘When it comes to cheating and thieving/it’s good to have some women around/ without a few beauties, nothing works’ you can understand why they are disappointed when Carmen reminds behind to seduce Don José.

In the open scenes costume designer Anja Vang Kragh dresses Arquez in uneven cut-offs with garters showing, and a loose open (red) top that reveals one bra strap and Arquez’s (always glistening) impressive cleavage. Gone are the days when battleaxes were cast as Carmen – this Carmen is a voluptuous knock out. Arquez’s performance is so seductive that you might find yourself buying a ticket for her debut at the Royal Opera House this coming February (2018).

If Carmen and Don José die tragically young, so did Bizet, who never lived to see his controversial and revolutionary final opera become of the most performed in history. In 3 June, 1875, Bizet’s wedding anniversary, the day after the opera’s 33rd performance, he dropped dead of heart disease. He was 36. The reviews were tepid with some critics outraged at the realism and the low morality. But the following year Tchaikovsky wrote that ‘Carmen is a masterpiece in every sense of the word’, and the Vienna Opera House productions in 1875 were praised by Wagner and Brahms, who is said to have seen it 20 times.

The brilliant libretto by Henri Meilhac and Ludovic Halévy (based on a novella by Prosper Mérimée) might contain politically incorrect stereotypes, but it transports us back to 1820 when Colonel Rafael del Riego led a large part of the Spanish army in a mutiny, demanding a liberal constitution. A liberal constitution had to wait a long time after Riego’s defeat, but Bizet’s opera was recognised as a triumph within ten years of his death.