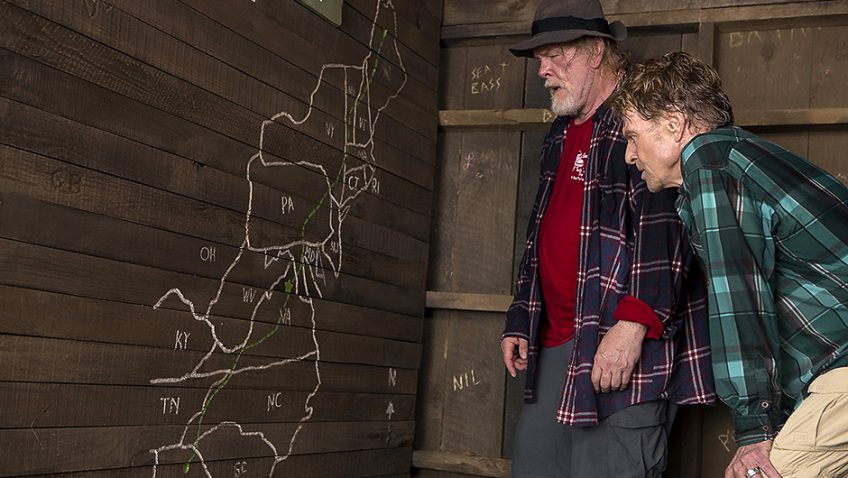 Light-hearted entertainment in an adaptation of Bill Bryson’s memoir

The opening scene in A Walk in the Woods

, directed by Ken Kwapis (the likeable Big Miracle and the vacuous, He’s Just Not That into You) has you licking your lips. We see the famous movie star Robert Redford, still handsome, clean-shaven, tall and lean, appearing on an American talk show portraying the – stout, bespectacled and bearded – travel and cultural writer Bill Bryson, also famous and still very much alive at 63. What makes this opening scene all the more curious, given Hollywood’s age bias, is that Bryson was only 44 (to Redford’s 79) when he wrote A Walk in the Woods

, the humorous travel memoir being publicised on the talk show.

A Walk in the Woods

describes Bryson’s attempt to walk the 2,200 Appalachian Trail from Georgia to Maine and the movie does this too, but obviously with more selectivity. Though the film’s beautiful scenery, steady supply of laughs (or smiles) and star power carry us along, like the grizzly bears that appear, relishing the prospect of dining on Bryson and his walking partner Stephen Katz (Nick Nolte), the rest of the film leaves us hungry.

Bryson (Redford) shows professional forbearance in the guest seat as the unprepared host delivers an embarrassingly bad interview, the kind that Redford knows so well that he hardly needs to act. His Bryson is a cool dude, artfully saying as little as possible while revealing more about the host than about himself. When asked about plans to retire, Redford/Bryson points out, ‘Writers don’t retire. We either drink ourselves to death or blow our brains out.’ When asked which it will be for him,’ Redford/Bryson replies: ‘After this interview, probably both.’

Nothing in the film quite matches this opening, but it’s still entertaining from start to finish. After this interview, Kwapis, and writers Michael Arndt and Bill Holderman, take us through the set up to the trek with a few purely functional scenes.

Bryson (Redford), back in a sleepy New England town after twenty years in the UK, is restless and feels the need to challenge his years and declining physical stamina. A sign for the Appalachian Trail lies at the end of his garden, tempting him, against the advice of his British wife (Emma Thompson). Bryson might be an experienced travel writer, but he’s no longer a distance hiker. When all of his friends decline to join him, Bryson hears from Stephen Katz (Nolte), an estranged school mate from their home town in Iowa with whom Bryson had fallen out years before.

Nick Nolte and Robert Redford in A Walk in the Woods

The minute Nolte shows up, you know that much of the humour will be devoted to jokes contrasting the unmarried, womanising, chubby, unfit recovering alcoholic Katz, who has remained in Iowa, with the happily married, famous worldly writer and intellectual, Bryson. A Walk in the Woods

is more of a buddy movie than an adventure movie and when the book was originally published, Redford was interested in adapting it as a vehicle for him and the late Paul Newman – a kind of book-end to Butch Cassidy and the Sundance Kid. Newman’s ill health put the project on the back burner.

Even with Nolte, however, you would expect two septuagenarians spending weeks living together to come up with some philosophical thoughts on life, death, family, friends, success and failure: a mix of the profane and hilarious and the sacred and profound. Unfortunately, the script is more interested in giving us a more superficial and pleasant jaunt past an insufferable lone, ‘know-it-all’ back backer (Kristen Schaal); two young hunks who offers assistance – the first time, proudly refused; some spills and falls; a bear attack (that is technically botched); and some ‘carry on’ sexual antics between Nolte and a corpulent married woman.

Redford gets his chance at romance, too, when the two men cheat by checking in to an upscale motel for some creature comforts. In what amounts to a sexist scene, the attractive proprietor, (played by 62-year-old Mary Steenburgen in what amounts to a cameo) comes on to Bryson. He respectfully rejects the bungled advances of the desperate, lonely, middle-aged woman. 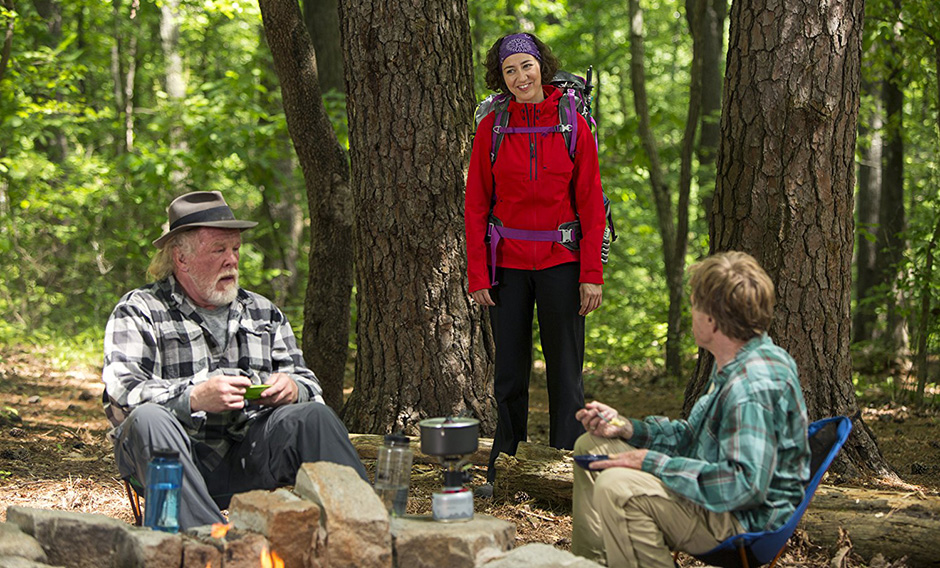 Nick Nolte, Robert Redford and Kristen Schaal in A Walk in the Woods

Those familiar with the book will find a lot omitted, but little changed, other than the emphasis on mortality, something a 44-year-old would not feel as imminently as a man in his 70s. If Bryson’s motive in the film is to defy age, the young Bryson’s real motive in trekking the trail is more commercial. There is a running joke in the film in which Bryson protests (too much, we think), ‘I’m not writing a book!’

For audiences who are fed up with loud, violent films full of actors in incomprehensible plots mumbling foul language, A Walk in the Woods

is a welcome alternative with enough entertainment value for the more tolerant cinephiles. Still, as with so many films starring actors over 60, the film is not much more than the sum of its stars.

None of the actors are stretched by their roles, least of all the two leads. While Redford, who has never played such a well-adjusted, conventional or comic type, is delightful, if a bit hesitant, as the straight man, Nolte is no stranger to variations on the self-destructive, devious though loveable tramp he played so well in the 1980’s social satire, Down and Out in Beverly Hills. Still, he pulls his considerable weight as Redford’s comic foil; and the chemistry between the two men stretches from their awkward, initial reunion right through to their touching emotional bonding.