Home / LIFESTYLE / REVIEWS > / FILM REVIEWS / You will be entertained, but not even Tom Hanks can make sense of this disappointing adaptation 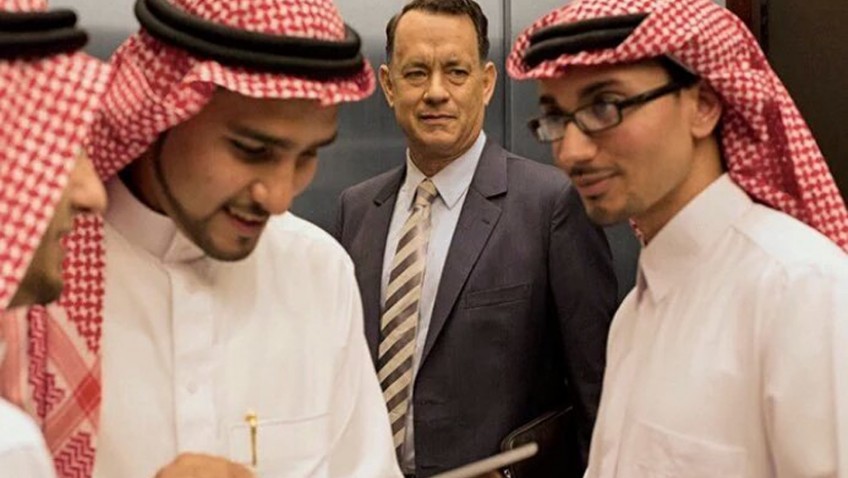 You will be entertained, but not even Tom Hanks can make sense of this disappointing adaptation

West German filmmaker Tom Tykwer (Cloud Atlas, The International) burst onto the scene at age 33 with his innovative, non-stop thriller, appropriately entitled, Run, Lola, Run.  Now 50, Tykwer ambles jovially along with his adaptation of Dave Eggers’ novel, A Hologram for the King.  Although the impressive desert locations in Morocco, Egypt and Saudi Arabia go some way toward conveying the story’s unusual and atmospheric setting, Tykwer seriously distorts Eggers’ requiem for a washed-up American salesman through a rose-tinted hologram.  It is a mixed blessing that the man whose life is transformed more by Tykwer’s script than by his experiences in Saudi Arabia is played by the ever-dependable Tom Hanks (Bridge of Spies, Captain Phillips, Cloud Atlas).

Tykwer’s innovative directing begins and ends with an odd prelude in which Alan Clay (Hanks) appears in a Truman Show-type set to the music of Talking Heads’ hit, Once in a Lifetime, and is then seen fastened in a rollercoaster.  The real Alan Clay is dreaming and wakes up in a hotel room in Jeddah, Saudi Arabia, too late to catch the shuttle with his younger business teammates to their destination. If the film’s off-beat prologue is intended to fill in the missing back story, it falls short of the mark. Alan is a Willy Loman for the 21st century and he is desperate.  It is 2010, so just before the so-called Arab Spring. Long divorced, Alan is selling his house to pay off his debts from a series of bad business decisions and investments.  Alan, who is obsessed with building things, worked his way up in a manufacturing company to become a top salesman for Schwinn Bicycles, an American-made product that was the envy of the world. We learn from a telephone conversation in the film that his estranged father blames Alan for the Chinese invasion of the USA and equates it with Schwinn’s decision to transfer their manufacturing overseas.

Alan knows that, at 54, his new job will be his last. He only got the consultancy job because he let it be known that he once met the nephew of King Abdullah of Saudi Arabia, the decision maker.  Despite the global competition, Alan is hopeful:  the company is a market leader and has developed a teleconferencing system based on a powerful hologram that creates a virtual reality meeting without the need for travel.  The commission on the sale will pay for his daughter Kit’s university tuition.  (The role of ‘Dave’ in the hologram is played by Ben Whishaw (Skyfall, Brideshead Revisited, Bright Star and Tykwer’s Perfume: Story of a Murderer and in Cloud Atlas)

Having missed the shuttle to KMET (The King’s Metropolis of Economy and Trade (a fictionalised version of the $67 billion King Abdullah Economic City), Alan hires a private driver, Yousef (Alexander Black). In Yousef he finds more than an invaluable guide through the surreal world of Saudi Arabia.  Yousef, a good-natured young man who speaks fluent English, studied in Alabama and listens to Western rock and pop music in his car, confounds Alan’s expectations of Saudi Arabia.  At KMET, however, Alan finds his technical team in a tent outside the main building, without WIFI,  air conditioning or refreshment.  While Alan eventually sorts out these practical matters, he cannot answer the question of when the King will arrive for his demonstration.

While waiting for the king, Alan becomes indoctrinated into the strange ex-pat life in Saudi Arabia.  An attractive woman from the Danish Embassy, Hanne (Sidse Babett Knudsen, so wonderful in the Duke of Burgundy) supplies him with an unappetizing blend of illegal alcohol; an invitation to a wild party and sexual favours, which he declines. Yousef, whose dalliance with a married woman makes it necessary for him to escape to his father’s country home, invites his new older friend along via Mecca.  And an attractive, divorced doctor, Zahra (Sarita Choudhury) offers Alan more than a successful operation to remove the symbolic lump on his back.

A writer/director who is adapting a film from another source is free to do what he or she likes, including throwing away all but a character or motif. What an adapter cannot do is change the whole tone and meaning of a novel without offering any alternative – at least one that makes sense.

The authenticity factor — Yousef is an American actor and Zahra was born in Blackheath of Bengali parents – is not the central problem.  Nor is the absence of sweat and or the long, sleepless nights in the hotel room alone with the illegal booze.  What is curious is the deliberate choice to turn a down-beat story about a lonely and desperate middle-aged idealist’s losing battle against globalisation into a feel-good, it’s-never-too-late romance.

In the book, Zahra is as frustrated with Alan’s sexual response as is Hanne, and there is no suggestion that they will see one another again despite their mutual attraction.  In the film, Alan’s trip to Yousef’s father’s palatial country home is a fun weekend away and a chance to see Mecca: in the book, Yousef does not risk driving through Mecca with a non-Muslim and the weekend ends prematurely when Alan is asked to leave in disgrace.   The film shows Alan writing to his daughter, and we assume the emails are sent.  In the book, he cannot find the words to explain his situation and to offer her hope or an apology, and he never sends anything. Gone, too, in the film, are the recurring flashbacks to his friend and neighbour’s suicide, an event that continues to haunt, or perhaps attract, Alan.

The film is entertaining and Hanks is, as always a solid leading man. But there is something wrong.  Hanks is still playing the attractive, American hero instead of a disillusioned American adrift in a virtual world with a bleak, unrecognisable future.