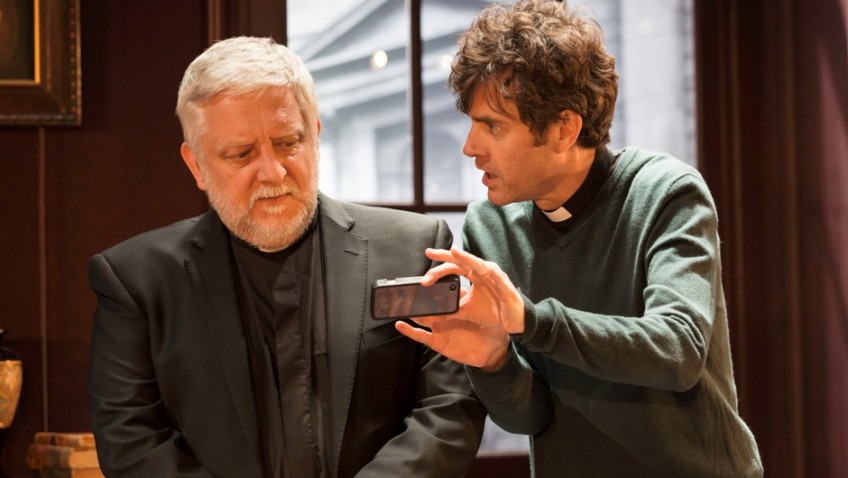 Occupy London, the anti-capitalist movement, protesting against economic inequality, social injustice and corporate greed, were stopped by the police from occupying the London Stock Exchange in 2011. The activists then proceeded to set up camp in St Paul’s churchyard.

But in whose jurisdiction is the courtyard? Is it the Church or the City?

The Dean closed the Cathedral (for health and safety reasons) for an unprecedented two weeks. The Cathedral, an iconic symbol for Britain, was shut for only four nights at the height of the Blitz during World War II.

One of the most famous photographic images is of St Paul’s rising out the smoke of the raging fires, proud, defiant and still undefeated after 47 consecutive nights of bombing by the Luftwaffe.

Steve Water’s play, an imagined version of real events, is set on the day the Cathedral is about to reopen, 28 October, 2011.

The occupation, incidentally, went on until 28 February, costing London over a million pounds in monitoring and legal fees.

Waters’ 90-minute play is literate. It has a dry wit and the balanced debate is extremely interesting and extremely well directed by Howard Davies. The acting is excellent.

Who will the Dean back? He is under enormous pressure to collude with the eviction; but, surely, the Dean should be supporting the protestors?

The worldly Bishop of London is fearful that the indecision, and the continuing bad publicity, merely advertises London has lost its nerve and marbles

The unworldly Dean knows he has to speak out, one way or the other; but full of doubt, he vacillates. Will he walk away?

What would Jesus do? Read Matthew, Mark, Luke and John. Have a look at Giotto and El Greco.

The anguished and beleaguered Dean, an unshakably decent man, is the finest clerical role for the stage since David Hare’s Racing Demons and Simon Russell Beale’s sympathetic and deeply felt performance is one of his very best

Paul Higgins gives a strong account of the Canon Chancellor, a vain young man, who sides with the protestors and tweets his resignation

Malcolm Sinclair is amusing as the supercilious, patronising and quietly threatening Bishop, who is exasperated to find the Dean praying to God, when he should be dealing with the crisis.

Rebecca Humphries is an eager young PA, Anna Calder Marshall is a dour old verger and Shereen Martin is a city lawyer in high heels, used to getting her way, smart, sleek and pushily efficient.