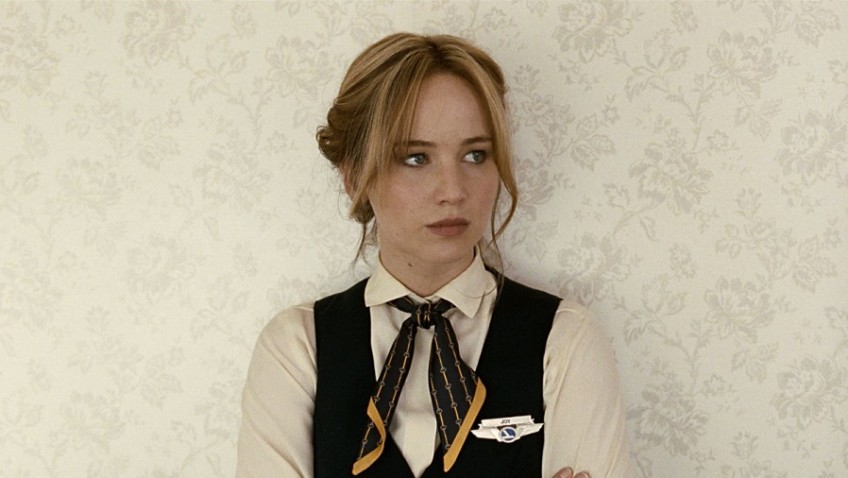 After Silver Linings Playbook (for which Ms Lawrence, then only 22, won an Academy Award) and the chaotic ensemble masterpiece, American Hustle, Writer/Director David O. Russell’s collaboration with Jennifer Lawrence continues with Joy.

Lawrence once again lights up the screen as the eponymous heroine of this coming-of-age comic biopic about household product inventor Joy Magnano.  But O. Russell, who cannot, it seems, leave his mastery of staging chaos and his love of an ensemble cast behind, puts Joy’s dysfunctional family at the heart of her American Dream story and omits any social commentary on the elevation of household goods to television stars.  If Joy holds her family together, so Lawrence holds the film together in another terrific performance.

When the main story begins, Joy is a young multi-tasking divorced mother of two living on Long Island (the film was shot in Massachusetts) and working at an airline counter. The film sets Joy up as the ultimate underdog as Joy claims to have dropped out of school, but in fact, the real Joy graduated from a very reputable university with a degree in business administration.

Through an awkward narration by grandma (Diane Ladd) and flashbacks we learn of Joy’s childhood inventions, the most promising of which was a fluorescent flea-collar for dogs. In the film, this great idea did not amount to anything as her father, Rudy (De Niro) failed to register the patent.

In addition to her job and children, Joy is a modern day Cinderella, cleaning and executing household repairs for family members who are either unable to unwilling to express their gratitude.  When she cuts her hands mopping up the deck of Rudy’s new girlfriend’s Trudy (Isabella Rossellini) yacht, Joy has an epiphany.

She invents a touch-free, machine washable, light yet durable mop and this time, she is old and savvy enough to secure the patent herself.   The film chronicles the long, obstacle-filled path to manufacturing and marketing the product, the first of many that turned Magnano, now 59, into a multi-millionaire.

A notch below Ms Lawrence at the top of the ensemble cast, though at the opposite end of the age spectrum, is actor Robert De Niro who has also appeared in O. Russell’s last two films. Here he plays Rudy, Joy’s self-interested, philandering, unsupportive father who returns to the family’s rundown home.

Joy houses him in the basement with her unemployed singer ex-husband, Tony (Edgar Ramirez), separating the two with a symbolic sheet so they do not kill one another. Tony, at least, earns his keep by taking care of their two children. Along with Joy’s best friend Jackie (Dascha Polanco), Tony is the only person who helps Joy launch her career and provides good advice.

Joy’s sister Peggy (Elisabeth Rohm), a would-be inventor herself, is jealous, as she has been working in Rudy’s body-parts business and resents the fact that Trudy is providing half the backing for Joy’s new venture.  Trudy’s finance comes with strings, however, including her firm recommendation of a shady California-based manufacturer and a badly negotiated contract that Peggy makes worse.

It is when ex-husband Tony introduces Joy to Neil Walker (Bradley Cooper), a big wheel at K-Mart hand-picked by Barry Diller to head up The Home Shopping Channel that the film comes into its own, as does Joy.  For those who don’t know, the film is distributed by 20th Century Fox and Diller is the executive who created the Fox Broadcasting Company.

Cooper, like Lawrence and De Niro appeared in Silver Linings Playbook and American Hustle, and his chemistry with Lawrence makes the sequences of the otherwise creepy marketing of the Miracle Mop a lot more fun.  We feel Joy’s frustration turn to anger when her mop is poorly demonstrated by a celebrity actor at the Channel and her determination as she takes hold of her career, defying her family and anyone who stands in her way.

Her showdown with the Texan owner of the California manufacturing company is straight out of a Western.  When Joy walks out of the late 19th century hotel room, a defiant smile creeps over her face, and, for a brief second, you can almost see Hunger Games Katniss Everdeen in action.

This being a biopic, O. Russell feels obligated to fill in the follow up to this showdown in a fast forward that feels hurried, and then to tag on a few captions. O. Russell relies on Lawrence to hold the film together as he shifts between a chaotic comedy and a fact-based coming-of-age drama. Perhaps it would be anticlimactic to continue the action after Joy asserts control over her business, but it does feel like the film stops just when it is getting into its stride.