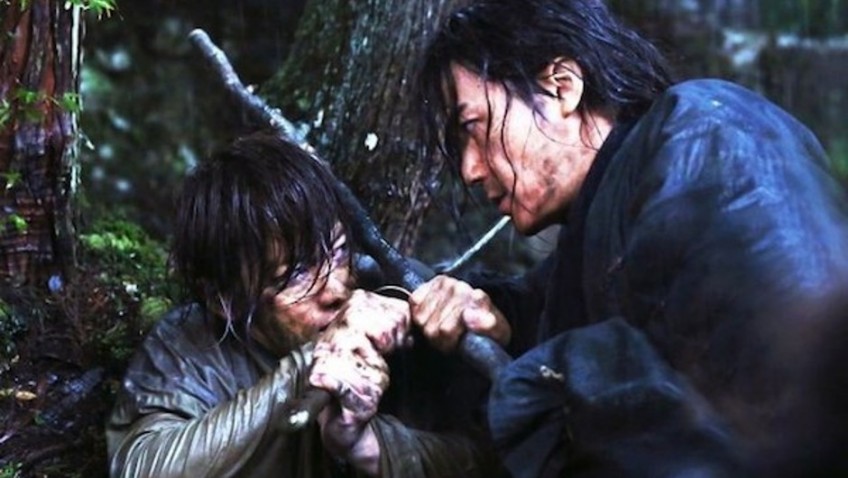 The production notes for Rurouni Kenshin: Kyoto Inferno, the sequel to the hit Japanese film Rurouni Kenshin, have the words ‘Action-Swordplay’ under the 139-minute running time.  You get your money’s worth of both, even if much of the film covers well-trodden ground.

Based on Nobuhiro Watsuki’s manga comic, Kenshin the Wanderer: The Romance of a Meiji Swordsman, the film is a fantasy. Despite the historical back drop, (the Shogunate’s Shinsengumi swordsmen were an elite murder squad operating in the late Shogun period 1864-1869), Kenshin is a fictitious character and the fighting sequences, though beautifully staged, strain credibility.  Nonetheless, if you like well-choreographed and filmed martial arts fights and androgynous, repentant heroes, none of this will matter.

Ten years earlier Himura Kenshin (Takeru Satoh), was the assassin Hitokiri Battosai. He abandoned his sword after the Imperialist forces celebrated their victory in the Battle of Toba-Fushimi and wandered, helping the weak in his travels.  Kamiya Kaoru (Emi Takei), who inherited her father’s Kendo School, took Kenshin in and gave him a home.  With Kaoru’s support, Kenshin has fine-tuned the art of non-lethal swordplay. When we first see Kenshin, he is also domesticated, carrying a basket of vegetables for dinner.

Naturally, this idyllic existence cannot last. Kenshin is tracked down by the new Meiji government’s Home Minister, Okubo (Kazufumi Miyazawa).  ‘Building a new era is harder than destroying one,’ Okubu tells Kenshin, who notices the Home Minister’s exhaustion.  Okubo reports that Makoto Shishio (Tatsuya Fujiwara), once an assassin like Kenshin, is training mercenaries to bring down the reformist government that he claims betrayed him.  Kenshin is the only man alive who can end the merciless Shishio’s bloodthirsty coup.

On the face of it, Kenshin seems like a poor match for Shishio (whose face has been bandaged up to hide the burns he sustained in battle). He is tiny, has not fought for ten years and no longer kills. This, of course, is the ‘romance’ of the film, because behind this diminutive, soft-spoken and impossibly young man’s robes, is pure fire. And under his long fringe, on his right cheek, is the hidden ‘X’ scar that brands him as Hitokiri Battosai.

Kaouri begs Kenshin not to go. She fears he will kill again or be killed.  But Kenshin is affected by scenes of grieving families weeping over the bodies of the policemen Shishio’s men have slain – scenes that hit too close to home. Eventually, Kaoru, and Kenshin’s good friend Sanosuke (Aoki Munetaka) ignore Kenshin’s wishes, and travel to Kyoto to support him

The remainder of the film is a series of sword fights where Kenshin either puts hordes of mercenaries out of commission with his unique back-bladed sword, or takes on individual adversaries, each with his own style. There is even a comical fight with a feisty young female villager who is in love with die-hard Shogunate warrior Aoshi (Yusuke Iseya). She does not realise that the boy-next-door will stop at nothing, not even killing her father, to stop Kenshin.

Good as all this is, and it is so well choreographed that you might find yourself sucked into the heroic romance, Kyoto Inferno is the set-up for the big show-down between Shishio and Kenshin that has been postponed for the third instalment.  If Kyoto proves to be a mere distraction, it is nonetheless an entertaining one; and much of that is down to the unlikely lead man.

Takeru Satoh is a big TV star and teen idol in Japan, having made his name in popular series such as Kamen Rider Den-O and the 2008 series Rookies.  He was also perfectly cast in a live stage production of Romeo and Juliet in 2012, the same year in which he made his first exportable film, Rurouni Kenshin.  Watching him here, it is hard to believe this is the same Satoh who, for his 20th birthday, organised a festival devoted to himself, treating fans to hours of projected montages of his TV and film work.

Despite being way too young for the part (he looks his 25 years, which would have made him a feared assassin in battle at age 15), Takeru is charismatic. His acting and stunt skills contribute to our ability to swallow the scenes in which he saves a village from 50 henchmen without actually killing one of them. The perfect comic timing that made ‘Den-O’ a success has here been transformed into another type of physical timing. Kenshin spins out of a calm, meditative trance like a panther springs onto its prey.

Once his mental state is in combat mode, he moves like an acrobat made of flexible steel.  After the blade hits its target, he lands in a kind of cocoon of a rest position, dead still.  When the threat subsides, he has to shake himself out of fight mode and adapt to a world in which he will soon be redundant.