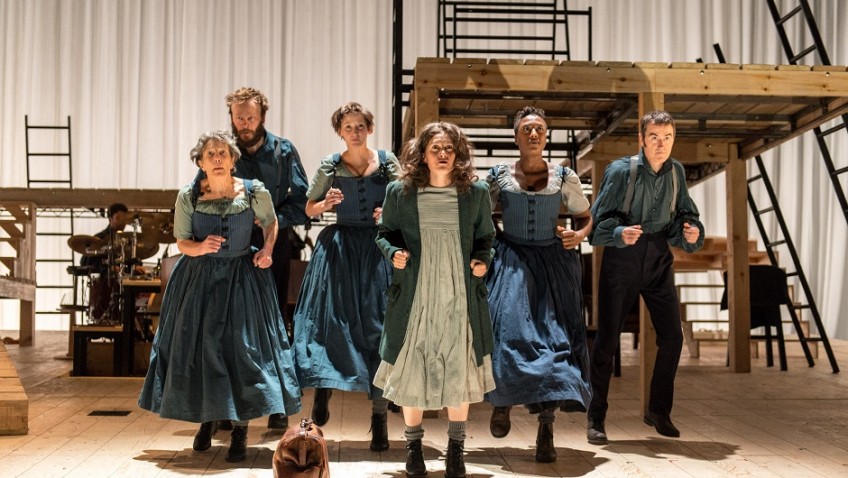 Jane Eyre and Bertha Mason are just mad about the boy

Charlotte Bronte based Jane Eyre on her own passions, dreams, frustrations and rebellion against a lonely and monotonous life. Her novel has all the ingredients of popular romantic Gothic melodrama: a child who is an orphan and abused at home and at school; a young governess who is in love with the master of the house; a mad wife hidden away in the attic; a bigamous marriage stopped at the altar; a manor house burned to the ground and the hero left blinded.

Published in 1847 it remains one of the most popular novels of the 19th century. It was first staged in 1848 and there have been many stage versions since.

There have been at least eleven films: one in 1944 with Orson Welles (too young) and Joan Fontaine (too pretty); another in 2011 with Mia Wasikowska (too bland) and Michael Fassbender (too lethargic).

There have also been two musicals, two operas, and a dance drama by Shanghai Ballet. The best stage version I have seen was Polly Teale’s clever and imaginative adaptation for Shared Experience with Monica Dolan as Jane. Sally Cookson’s imaginative production for the Bristol Old Vic was originally staged in two parts on two days. It has now been cut to a single event lasting three and quarter hours. Cookson presumes the audience knows the novel and provides arresting images on a bare white curtained stage. The set is made up of wooden platforms and steel ladders and it looks like a children’s playground.

Bronte didn’t think a heroine had to be beautiful to be interesting. Jane is little and frail and very pale and very plain.  Madeleine Worrall gives a fierce and intelligent account of an independent and indomitable woman who wants Rochester to accept her on equal terms.

Felix Hayes is likable as Rochester; but he is hardly the dark, grim, ugly, chillingly formal and stiff character of the novel.

The production’s physical, emotional and intellectual journey is accompanied by an on-stage band and songs throughout. Melanie Marshall (who plays Bertha Mason) even sings Noel Coward’s “Mad about the Boy”.

It’s a very long time before there is any extended dialogue – not until Jane meets Rochester in fact. His proposal of marriage is unforgettable: “Marry me, poor and plain, though you are!” What feminist could possibly refuse?