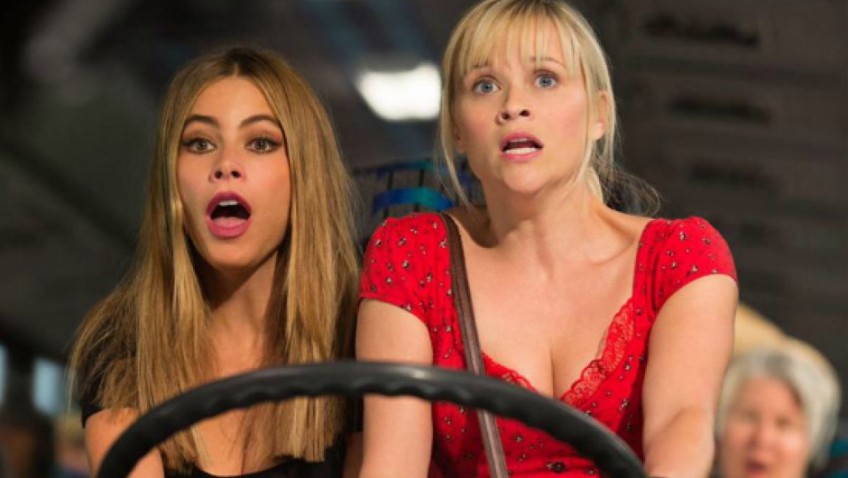 Reese Witherspoon (Wild, Walk the Line) plays by-the-book, career cop Officer Cooper, the only officer left to accompany reluctant witness Daniella Riva (Sofia Vergara, Chef, TV’s Modern Family) across Texas to testify against ruthless criminal Vincent Cortez. What could have been a fun, funny and feminist genre comedy is no more than a painful waste of talent in Anne Fletcher’s Hot Pursuit.

Films about cops charged with protecting or escorting a witness and/or prisoner to court in order to testify are common enough to be considered a mini-genre. Harrison Ford, in Witness, Tom Berenger in Someone to Watch Over Me, Samuel L Jackson in Snakes on Planes, Clint Eastwood in The Gauntlet and Bruce Willis in 16 Blocks are noteworthy examples.

The point of most of the films is the development of a relationship between two-mismatched cops or the cop and the witness, turning them into buddy-movies. Buddy movies, such as Lethal Weapon have traditionally been the preserve of males although Thelma and Louise was a major exception. But that is changing. Working from a misguided and uninspired script by David Feeney and John Quaintance, Fletcher aims to combine the female buddy film genre with the cop and witness genre. Toward that end Hot Pursuit pits petite, blond Reese Witherspoon against tall, dark, curvaceous Sofia Vergara in a cop-and-witness road movie that is so flimsy it can’t even make it to 90 minutes.

Cut to the present when that little girl is the straight-laced Officer Cooper (Witherspoon), whose inability to relax off duty has produced a socially-backward, single woman. When Cooper asks her date why he is sneaking out of the restaurant he tells her, ‘when I said I was leaving you pulled a gun.’

Cooper’s big break comes when she is assigned to a unit escorting gangster-turned-state witness Felipe Riva (Vincent Laresca) to court, but her elation is short lived. Riva’s villa is ambushed by Cortez’s men and some corrupt cops.

Left alone with the reluctant and petulant Daniella, who insists on dragging a suitcase full of high heeled shoes behind her, Cooper realises that the answers are not in the police manual. Of course, the expected bonding takes place, facilitated by the need for the women to disguise themselves. The fashion conscious Daniella helps Cooper find something feminine, though characteristically vulgar.

Since a film with this plot is always going to be formulaic, it has to be very funny and develop likeable, original characters to stand out. This, the filmmakers have failed to do. There are a couple of funny lines in the film and these come early on. Daniella’s very exaggerated Latino accent is racist and annoying rather than funny, and Witherspoon is a far cry from the funny comedienne in Legally Blond. Ironically, for a film directed by a female director starring two well known feminists, the jokes and gags tend to be sexist.

For no reason Daniella and Cooper feign a lesbian relationship to distract and ‘turn on’ a farmer with a rifle pointed at them. The idea of Daniella’s attachment to her high-heeled shoes associates women with risking their lives for useless material possessions. Even the fact that these are not, as everyone will guess, ordinary shoes, does not lessen the stereotypical connotation.

Officer Cooper, whose inflexible manner is sometimes interchangeable with stupidity, looks so tiny next to the statuesque Daniella that she resembles a weird doll in a cowgirl outfit. Daniella draws Cooper’s size to our attention with callous lines like, ‘Look at you, you’re teeny-tiny, you’re like a little dog that I can put in my purse.’

Not only is a gangster’s wife unlikely to use this kind of language when addressing a cop – or anyone – but it sounds like the writers are feeding Vergara Melissa McCarthy lines.

In fact, both actresses are given the kind of repeated off-the-wall remarks and prolonged passages of gross-out language that are the trademark of Judd Apatow and that, at their best, McCarthy can pull off so brilliantly.