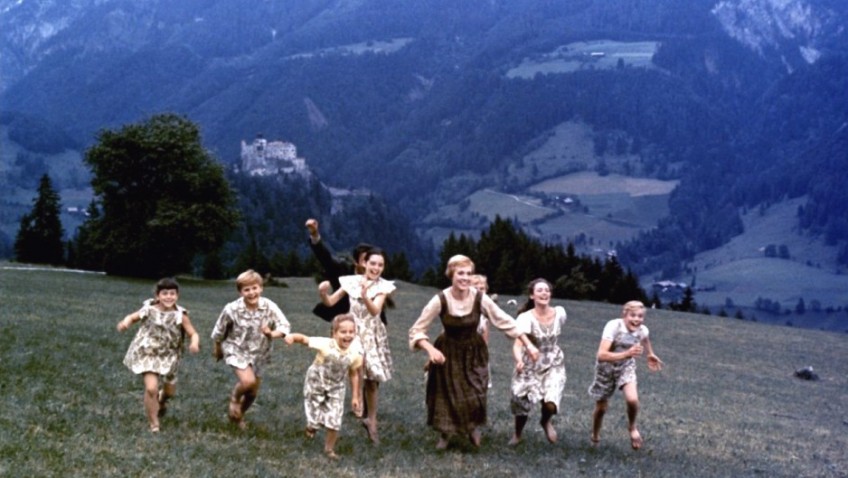 The Hills are still alive ……

This year sees the 50th anniversary of the film release The Sound of Music which is one of the high points of the Hollywood Musical era.  It was first released in March 1965 and remains an enduring favourite.

It swept the Oscars the year it was nominated. Winning five statues, including Best Picture and Best Music, the film also garnered nominations for Julie Andrews and Peggy Wood for lead and supporting actress respectively.  For years until the Godfather in 1972 it was the number box office hit and was only ousted as the most successful musical film in 1978 by Grease.

I am sure many of you remember going to see the film at the cinema and huge numbers of us went over and over again.  The question on all film fans lips was “how many times have you seen it?”

This wholesome production from producer/director Robert Wise) and 20th Century Fox has become one of the most favorite, beloved films of moviegoers. It is a joyous, uplifting, three-hour adaptation of Richard Rodgers and Oscar Hammerstein II’s 1959 hit Broadway stage musical.  This was the well-known partnership’s last collaboration. It made a huge star of Julie Andrews and an unlikely heart throb of Christopher Plummer.

Marketing slogans cried: “The Happiest Sound in All the World.” Ernest Lehman’s screenplay was based on the book by Howard Lindsay and Russel Crouse. That book was in turn based on Baroness Maria von Trapp’s 1949 autobiography (The von Trapp Family Singers) about the exploits of the family of singers and their escape from the Nazis in Austria in 1938.

The star of the film was the previous year’s Best Actress Academy Award winner, a fresh-faced Julie Andrews in a similar role as her governess performance in Mary Poppins (1964). She is accompanied by her lovely singing voice, glorious, on-location travelogue views of Salzburg, Austria filmed in 70 mm, and melodic, memorable sing-along tunes, including “Maria,” “The Sound of Music,” “My Favorite Things,” “You Are Sixteen, Going On Seventeen,” “Climb Ev’ry Mountain,” “Do-Re-Mi,” and “Edelweiss.”  Two songs were written by Rodgers specifically for the film, “I Have Confidence” and “Something Good”.

The sentimental, entertaining musical was nominated for ten Academy Awards, and came away with five major wins.  Fifty years later it still seems as fresh as when it was made and when I recently watched it (again) on the television despite my sigh of boredom and intention not to sit through the whole thing,  I could not turn it off and yet again dissolved into tears at the most poignant bits.

The opening sequence of The Sound of Music is a much-heralded, breath-taking piece of film-making. With a sweeping aerial view, the film opens with a left-to-right camera pan through the clouds and across rocky, snow-covered mountains. The camera dips into a green, wooded valley with steep cliffs that descend into a snow-fed lake. Reflections of the hills are viewed in the mirror-like images on the water’s surface.

As the camera moves over the landscape and village, it discovers an open, green area nestled between the peaks. It moves closer and zooms into the green field, where it suddenly finds a happy and joyous Maria, a novice Salzburg Austrian nun, walking across the wide expanse of land. With open-armed appreciation of the beauty of the surrounding majestic peaks and vistas of the Austrian Alps, she twirls and sings the title song. For her: “The Hills Are Alive With the Sound of Music.”

You can still book a Sound of music tour in Austria and the latest craze of attending a theatre in order to dress up and sing along with the music was most likely started with this film as early as 2000.  A recent off shoot of the desire to share the songs is the popular Frozen Disney film.

It may still be one of our best loved musical movie extravaganzas and despite its saccharin sentiments there are dark moments.  The tension in the ending sequence when they are hiding from the Nazis is still frighteningly gripping.

The last member of the von Trapp died last year at the age of 99 only last year, but they will never be forgotten as long as the hills are alive……

Share your memories of the film and how many times you have watched it.