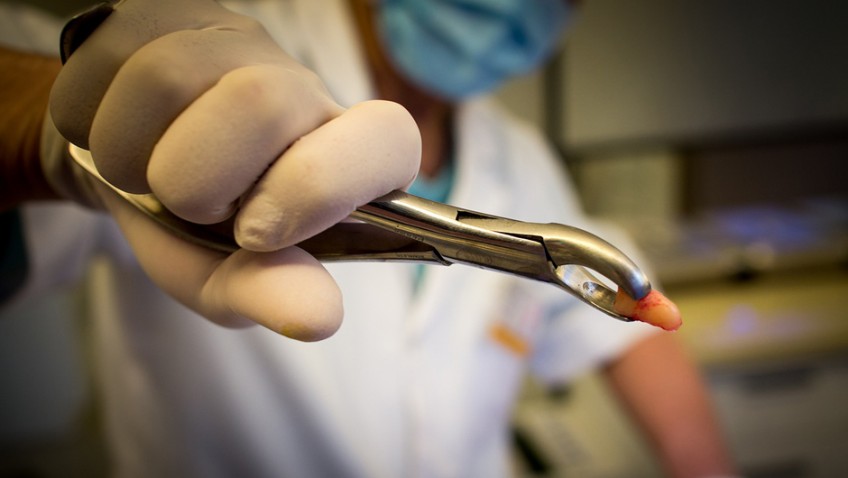 Gum disease causes a greater loss of memory and thinking in people suffering the early stages of Alzheimer’s disease, a new study warned.

Periodontitis or gum disease causes a six fold increase in cognitive decline in patients with mild or moderate dementia in just six months.

The disease is common in the elderly and those with Alzheimer’s may find it harder to keep teeth clean.

Now a study by King’s College London and the University of Southampton found higher levels of antibodies to periodontal bacteria are associated with an increase in levels of inflammatory molecules elsewhere in the body.

This in turn has been linked to greater rates of cognitive decline in Alzheimer’s disease in previous studies.

The latest study followed 52 participants with mild to moderate Alzheimer’s Disease were given a mental assessment and a blood sample was taken to measure inflammatory markers in their blood.

They then had an independent check up and followed up six months later.

The presence of gum disease at the start was associated with a six-fold increase in the rate of cognitive decline in participants over the six-month follow-up.

It was also associated with a relative increase in the pro-inflammatory state over the six-month follow-up.

Results published in the journal PLOS ONE suggested gum disease was associated with an increase in cognitive decline in Alzheimer’s Disease, possibly via mechanisms linked to the body’s inflammatory response.

The link was not fully understood and other factors may play a part.

However growing evidence from a number of studies links the body’s inflammatory response to increased rates of cognitive decline.

Southampton’s Professor Clive Holmes said: “These are very interesting results which build on previous work we have done that shows that chronic inflammatory conditions have a detrimental effect on disease progression in people with Alzheimer’s disease.

“Our study was small and lasted for six months so further trials need to be carried out to develop these results.

“However, if there is a direct relationship between periodontitis and cognitive decline, as this current study suggests, then treatment of gum disease might be a possible treatment option for Alzheimer’s.”

Dr Mark Ide, from King’s Dental Institute added: “Gum disease is widespread in the UK and US, and in older age groups is thought to be a major cause of tooth loss.

“A number of studies have shown that having few teeth, possibly as a consequence of earlier gum disease, is associated with a greater risk of developing dementia.

“We also believe, based on various research findings, that the presence of teeth with active gum disease results in higher body-wide levels of the sorts of inflammatory molecules which have also been associated with an elevated risk of other outcomes such as cognitive decline or cardiovascular disease.

“Research has suggested that effective gum treatment can reduce the levels of these molecules closer to that seen in a healthy state.”