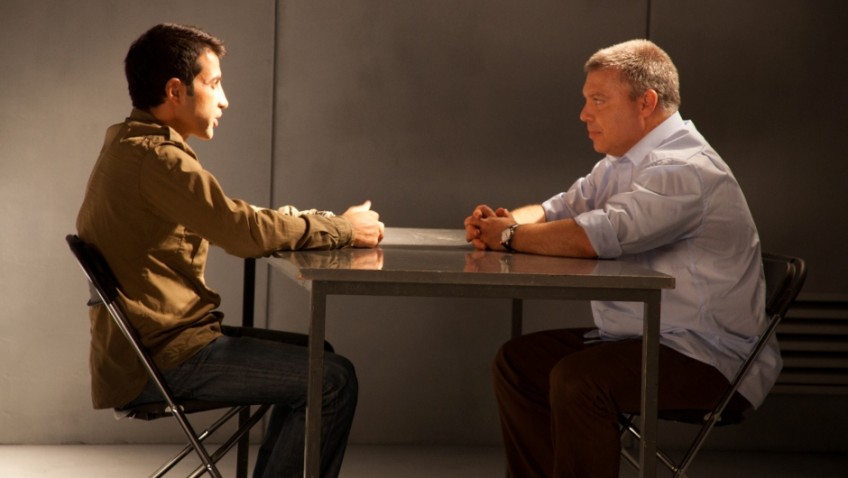 The Green Prince is a documentary that plays like a gripping two-hander spy drama in which the audience either accepts the information at its startling, and even emotional, face value, or interprets it with the scepticism of their political convictions.

With more external and visual corroboration, and some answers to the questions raised, The Green Prince could have been a great movie instead of just an intriguing one.

The son of Hamas leader, Sheikh Hassan Yousef, Mosab was caught arms running and imprisoned.  In prison he began to doubt Hamas’s morality. When he was released, he tells us that his friends had gone on to University (that’s not something we often hear about Palestinians) and he did not know who to trust.

At his most vulnerable, Mosab was approached by Gonen who turned him, giving him the code name ‘The Green Prince.’ For ten years, Mosab provided invaluable information to the Israelis and formed a close relationship with his handler, though trust is something neither man could count on. Mosab had to spend a proportion of his young life in prison or he would be suspected of collaboration with the Israelis. Shin Bet had to protect its valuable asset.

The burning question is ‘why’. Mosab tells us that while he was in prison, he witnessed hard-line Hamas prisoners torture to death their fellow Palestinians who were suspected, on very little evidence, of collaboration.

He also suspected that an explosion in which dozens of Palestinian civilians were killed was the handiwork of Hamas, although it was blamed on Israel. Mosab, who never joined Hamas, began to doubt that Hamas shared his desire for peace.

He also reasoned that if he were an insider, he could protect his father, although he recognises that his father would not have seen it that way.  When Mosab tipped off his father to an Israeli raid, his father went into hiding.

Mosab leaked the location, but only so that his father could be singled out and spared (in this case, by the ‘protection’ afforded by an Israeli prison.

Ten years of lying to everyone in your family, and risking your life (Mosab had no official day off) topped off by a 6-month stint in prison, finally took its toll on Mosab’s health and he wanted out.

When Gonen arranged a short break for Mosab on compassionate grounds, Shin Bet sacked him. The denouement of this story is a cracker.

It could restore your faith in mankind, give you hope for peace in the Middle East, or increase your suspicions that there is more to this story than meets the eye. Director Nadav Schirman puts the two men on camera from the waist up against a dark, plain background and lets their expressive faces and voices tell their stories.

This is effective, as both are as charismatic and as convincing as they are hard to read.  Both men change over time with the change in Mosab being dramatic.

The good-looking, fit young man with huge brown eyes and thick black hair who is sitting before us bears little resemblance to the unattractive, bearded, and stocky young man in the few photos there are.

One of the problems with Schirman’s approach is that, perhaps understandably, there is a dearth of video or news reel footage to illustrate the tale we are hearing.  Most of the visuals are generic.

There are also no interviewees to corroborate what we are hearing.  In need of money and absolution, Mosab wrote a book about his experience.

While the book was no doubt designed to justify his actions to both sides, and clear his name after being associated with terrorism, it did little to endear him to Hamas or the Americans.

The book, however, lacks the film’s dramatic ending, which is the most moving, and emotionally-satisfying part of the story: if you believe it.