Home / SLIDER / The Gospel of Tartuffe in Atlanta, Georgia. 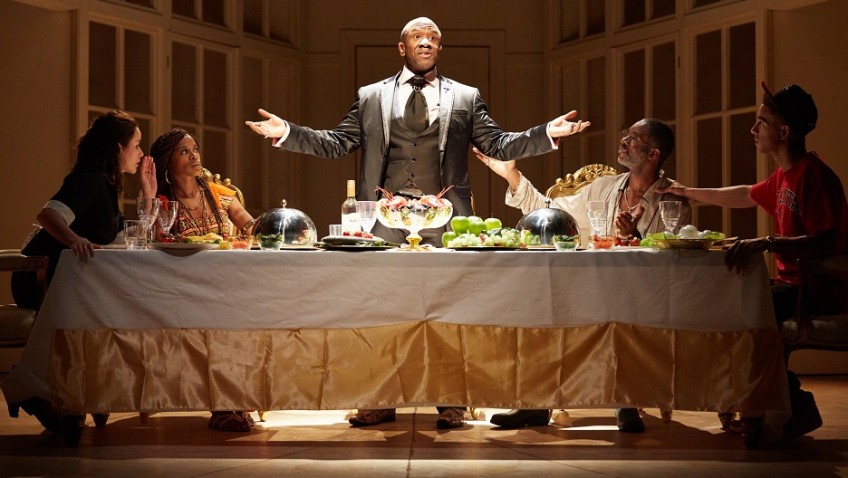 The Gospel of Tartuffe in Atlanta, Georgia.

One of the most noticeable things about so many revivals of classic plays these days is not only are they regularly brought bang up to date but that they are given a complete overhaul.

Marcus Gardley’s farce owes something to Moliere’s great satire on religious hypocrisy, which it acknowledges in its alternative title, The Gospel of Tartuffe; but, unlike some recent productions, it never pretends to be anything but a modern farce by Gardley.

Tartuffe is now Apostle Toff and he is in charge of a mega church, the Mighty Rock and Holy Roll Cathedral, in Atlanta in Georgia. Strapped for cash he decides to steal it from a sick and gullible multi-millionaire.

Indhu Rubasingham’s production, which opens with a parody of Gospel singing, is very broad and very loud; perhaps too broad and certainly too loud some of the time.

Lucian Msamati has a lot of fun with Toff, who, as an evangelist and a former masseur, likes nothing better than to lay his hands on the female members of his congregation. He gives the rhyming script a real zing.

There is a hilarious scene, when he says a very long grace which excites a ravenous family to paroxysms and there is more farce when he exorcises a gay (Karl Queensborough) who wants to be an air hostess. Gardly has a great way with words.

The scene when the millionaire and his two children spy on Toff’’s attempt to seduce the millionaire’s mistress is acted in a manner which recalls Shakespeare’s Twelfth Night; but with this difference that these particular eavesdroppers are actually funny

The high spot is a verbal confrontation between Toff’s wife (Sharon D Clarke) and the millionaire’s blowsy mistress (Adjoa Andoh), which, contrary to expectation, the mistress wins, if it is judged by the applause the mistress gets from the audience when she asserts that her voluptuous lusciousness is a gift from God, a masterpiece of His imagination.