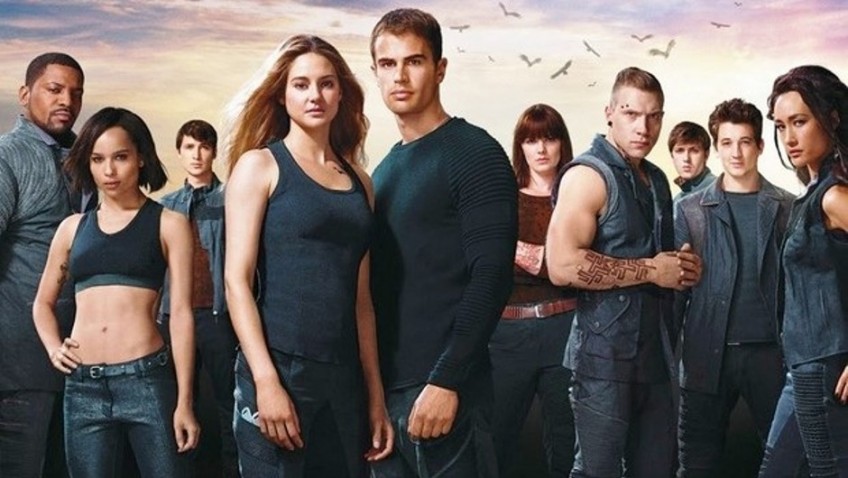 Forget the movie, and sit back and watch Shailene Woodley: already a star.

Insurgent is the second instalment of 26-year-old novelist Veronica Roth’s dystopian trilogy that has been adapted for the screen and directed by Robert Schwentke (The Time Traveler’s Wife, Red).

It is perhaps unfair to compare the film to Twilight or the Hunger Games, or countless other young adult dystopian action/romance/coming of age fantasies, but it does have that copy cat feel to it, without adding anything new.  And after the first 20 minutes, Insurgent does start to feel like what it is: a serviceable bridge between the first book (Divergent) and the last (Allegiant).

What Insurgent has going for it is a heroine to rival the Oscar winning actress Jennifer Lawrence (age 24) in the Hunger Games. The charismatic Shailene Woodley (age 23), holds the screen and your attention far longer than she has the right to in this convoluted trilogy.

In Divergent, we learned that a post-apocalyptic Chicago has been fenced off to the dangerous outside world for the protection of the survivors who never stray beyond.

The population have been divided into five broad factions according to their personalities and inclinations. Amity is for the peaceful; Candor for the honest; Dauntless for the brave, Erudite for the intellectual and Abnegation for the Selfless.

There are two more non-factions that are considered undesirable: the misfits or outcasts of the five factions are the Factionless while those who, God forbid, show attributes of more than one faction, are Divergents. If it’s bad to be Factionless it’s much worse to be Divergent. This structure might sound like another novel and clever metaphor for young adults searching for their identity, but it is difficult to sustain.

The problem for sixteen year old Beatrice ‘Tris’ Prior (Woodley) is that she is a Divergent, or free thinker. On her 16th birthday, Beatrice, who never really felt like she belonged in Abnegation with her family, chooses to switch to Dauntless.

After completing several daunting initiations, she falls in love with a handsome team leader called Four (Theo James).  Like Tris, Four, who is really Tobias Eaton, the estranged son of respectable Council head Marcus Eaton (Ray Stevenson), has some secrets about his true identity.

When it is discovered that Tris is really a Divergent and cannot be easily brainwashed, she is public enemy number 1.

Tris and Four uncover a plot by Jeanine Matthews, (Kate Winslet), an evil bureaucrat with a hidden agenda, to take control of all the factions. Tris starts a rebellion that sees her parents killed trying to save her.

In Insurgent Tris and Four, are in hiding with the farmers, Amity. With them are Dauntless member Peter (rising star Miles Teller, recently seen in Whiplash) and Tris’s Erudite brother Caleb (Ansel Elgort, who was Shailene Woodley’s lover in The Fault is in our Stars). They have been too conditioned to really rebel, however, and both betray Tris and Four.

When the police come to Amity to arrest them, Tris and Four flee and seek refuge with the Factionless led by, of all people, Four’s estranged mother (Naomi Watts).   Four does not trust his mother who abandoned him as a child, but he is forced to accept an uneasy alliance with her to destroy Jeanine, their common enemy.  In addition to identity crises, Insurgent is a Freudian field day, too.

Insurgent is really one long, mind-numbing chase movie topped off with a long, though visually inventive, virtual-reality test that was invented to fill out the running time.

Just as Katniss in the Hunger Games is the chosen one, (and becomes a media celebrity), so, it turns out is Tris.  Jeanine discovers that she needs Tris to unlock a mysterious blue box that had belonged to Tris’s mother.  It’s a kind of Pandora’s box and Tris, it seems, must be sacrificed to open it.

We were so overwhelmed with Woodley in Divergent that we overlooked the filmmakers’ failure to come up with a persuasive physical reality to transport us into this dystopian world.  Insurgent gives us time to think about the production design a bit more.  The burnt-out building and underground cavern that the Dauntless call home was hardly original.

The folk in the Amity faction live like Quakers outside of Philadelphia, while the Erudite Headquarters where Jeanine, like Stalin, hold her purges, is a glass tower that would not be out of place on Victoria Street in London. Where, you wonder, does this civilisation with no capitalist structure and no external entities to trade with, get the money for all these drug tests and laboratories and computers?

Dig a little deeper and the rebels in this communist state are the ‘individuals’ who refuse to conform to a totalitarian government and be governed by propaganda.  This is an Animal Farm allegory with Hope in the form of two beautiful young people.